India-US trade talks to restart with little sign of compromise 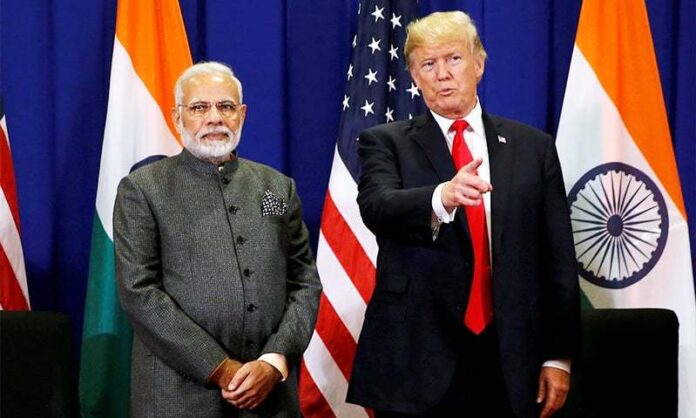 NEW DELHI: Indian and US trade negotiators will meet on Friday, with little sign of a compromise on a series of protectionist measures taken by the two governments in recent months that have strained ties between the strategic partners.

US President Donald Trump has been putting pressure on India to do more to open its markets, saying this week again on Twitter its high tariffs were “unacceptable”.

Indian Prime Minister Narendra Modi, re-elected in May, has been pushing nationalist policies with higher tariffs on everything from electronic goods to tighter controls on foreign firms in the fast growing e-commerce market to help foster domestic companies and create jobs for millions of youth.

A delegation led by Assistant US Trade Representative (AUSTR) for South and Central Asia, Christopher Wilson, will meet Indian officials to try to restart negotiations on tit-for-tat tariffs that were put on hold because of India’s election.

Trump and Modi met in Osaka on the sidelines of a G20 summit in June where they agreed to build ties and sort out thorny trade issues.

At Friday’s meeting, New Delhi expects US officials to push against India’s efforts to mandate foreign firms to store more of their data locally, an Indian government official said.

Washington is also expected to seek revisions to foreign investment rules for the e-commerce sector that have forced companies such as Walmart Inc’s Flipkart and Amazon.com Inc to rework their business strategies in the country.

“The meeting with USTR was meant to set the tone for further talks after a positive G20 discussion. But Trump’s tweet has shown their intention is to continue with a tough stance,” another official said.

India’s trade ministry did not respond to a Reuters email seeking comment.

Indian Foreign Ministry spokesman Raveesh Kumar said during a briefing that India was looking to resolve trade issues, many of which were discussed in Osaka.

“We are looking forward to a constructive engagement,” Kumar said.

One concern among Indian policymakers is that the Trump administration may push for a free trade agreement with India that could dent India’s competitiveness, lead to a flurry of imports and hurt Modi’s “Make in India” plan.

In a recent meeting, Foreign Minister Subrahmanyam Jaishankar told trade ministry officials that “Trump is clearly preparing for a larger game, a larger opening,” according to one of the officials aware of the discussions.

Mark Linscott, a former USTR official, wrote in India’s The Hindu newspaper on Tuesday that trade should be a bigger part of the strategic partnership and that a free trade pact “is the ultimate example of economic integration”.

Oil prices slip in cautious trade ahead of OPEC+ meet

SINGAPORE: Crude oil prices fell on Monday, amid investor jitters ahead of a meeting of producer group OPEC+ to decide whether to extend large...
Read more
World Business News

SYDNEY: World shares paused to assess a record-busting month on Monday as the prospect of a vaccine-driven economic recovery next year and yet more...
Read more
World Business News

LONDON: Britain has secured two million doses of Moderna Inc’s COVID-19 vaccine candidate, to be available in Europe as early as the spring, the...
Read more
HEADLINES