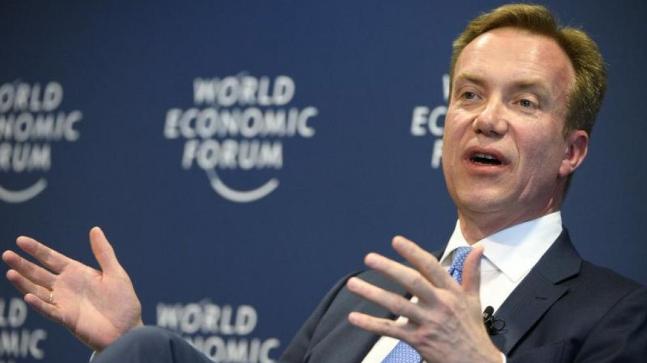 Speaking at a session arranged by Pathfinder Group and Martin Dow Group on Thursday, the WEF president said that the most valuable companies of today didn’t even exist two decades ago and there is no reason why one or more such companies of the future cannot be from Pakistan.

Among the attendees were members of the cabinet, Federal Board of Revenue Chairman Shabbar Zaidi, World Bank’s Country Director for Pakistan Patchamuthu Illangovan, State Bank of Pakistan (SBP) Governor Reza Baqir, officials from the Pakistan Stock Exchange, prominent journalists, and members of the civil society.

The WEF president said an increase in the tax (paying) population is imperative for the revival of Pakistan’s economy, which stands “at a critical point.”

Brende remarked, “I think Pakistan is going in the right direction…there are lots of positive things happening.”

He said the growing bulge of youth population needs to be educated and capitalized on.

Touching upon the importance of social media in modern day politics and business environment, he said, “There is no editor sitting to control the information that is produced. The only way to control the content on social media is to teach our children how to separate genuine news from fake news.”

Speaking on the occasion, the SBP governor repeated the government’s rhetoric that the [country’s] foreign exchange reserves had depleted to dangerous levels.

He talked about the Ehsaas Programme, saying that the government initiated an austerity campaign keeping in mind the economic situation of the country.

“Owing to such prudent measures, the forex reserves have started improving steadily.”

Baqir, however, stressed the need to facilitate Pakistani exporters so that economic indicators could be improved. He termed the international community as “an important stakeholder for trade, cheap financing and as a source of foreign exchange”.