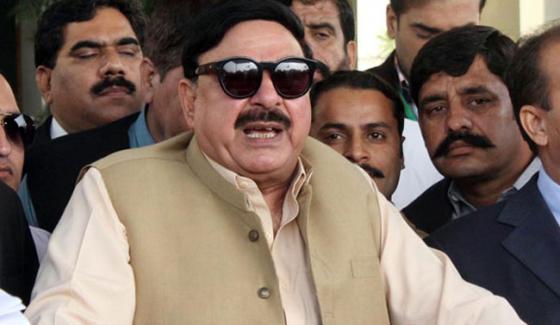 RAWALPINDI: Railways Minister Sheikh Rasheed Ahmed said on Monday that the government would lay the foundation stone of Lai Expressway soon, as all the arrangements with regard to the project’s construction have almost been finalised.

Talking to media during his visit to Gawalmandi, he said the government has accelerated its work on the much-awaited Lai Expressway project, which remained neglected in the past.

“Owing to the incompetence of former rulers, the project’s cost had jumped to Rs70 billion from around Rs18 billion,” he claimed, adding that the project would be constructed on a Build-Operate-Transfer (BOT) basis.

He said the expressway would start from the Soan Bridge, instead of Ammar Chowk in Chaklala, so that maximum number of people could be facilitated.

“The project will change the fate of the citizens, particularly living along the Lai Nullah, as the citizens will be allowed to construct commercial buildings along the road,” he added.

Rasheed said the authorities concerned have devised a plan to prevent floods in Lai Nullah during the monsoon season. He urged the citizens living in the low-lying areas not to throw solid waste and garbage into the nullahs so that unnecessary blockages could be avoided.

The minister said citizens should contribute to the sanitation department’s efforts regarding the cleanliness of the nullahs, adding that solid waste should only be deposited at specified points.

“Nullah Lai is being cleared of silt and solid waste, besides being widened and deepened to save the city from floods,” he added.

Rasheed informed that all the departments concerned, including District Administration, WASA, Rescue-1122, Police, Army and others, have finalised their arrangements to cope with floods in Nullah Lai.

“The government is striving to permanently resolve the issue of flooding in Nullah Lai. Feasibility study of the Lai Expressway project has been completed, besides PC-I of the project,” he said. “Under the project, three sewage treatment plants will be installed on Nullah Lai to treat grey water, which will then be used in parks, green belts and for other purposes.”

To a question, the minister said that the construction work of Rawalpindi Mother and Child Hospital project has been started, adding that the Punjab government has also approved two universities and three colleges for Rawalpindi.

He said the matters pertaining to the uplift of Mainline-I (ML-1) from Karachi to Peshawar would be finalised soon.

“The up-gradation of 1,700-kilometre ML-1 track will change the entire look of Pakistan Railways and will bring economic revolution in the country,” he maintained.

To another question, he said the politics of those who were involved in loot and plunder has been exposed before the nation.