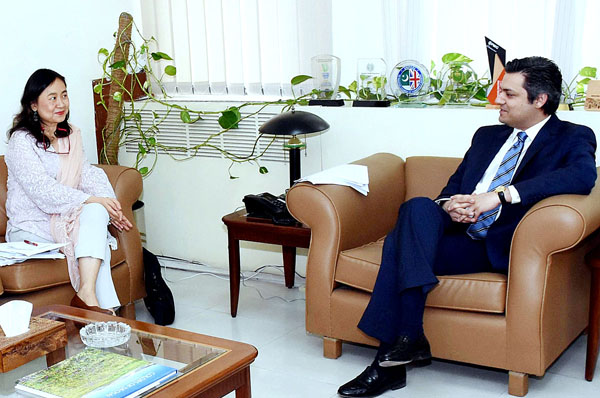 The minister acknowledged the ADB’s support for Pakistan, urging the bank to scale up it’s lending to Pakistan, including programme lending and project financing.

He said that the government was keen to explore innovative financing models and mobilize investment in infrastructure & social sectors. “These initiatives will not only provide fiscal space to the government but will also help boost economic activities in the country,” he added.

The ABD director on the occasion noted that the bank and Pakistan had successfully met many development challenges.

She assured the minister of the bank’s support in the priority sectors as identified by the government. Yang also briefed the minister on ADB’s ongoing interventions and pipeline projects.

She updated the minister on the ADB’s Programme Lending and Special Policy-Based Loan, including Trade & Competitiveness Programme, Energy Sector Resilience Programme and Capital Market Reforms Programme. “ADB is committed to expanding this partnership with Pakistan in order to ensure prosperity for its people,” she added.

Meanwhile, in a separate meeting, Economic Affairs Minister Hammad Azhar briefed Japanese Ambassador Kuninori Matsuda on key priorities of the incumbent government as well as on the structural reforms agenda being executed to revive the country’s economy.

“Investment in human capital, protection of the vulnerable and completion of institutional and governance reforms are among the top priorities of Prime Minister Imran Khan’s regime,” he stated.

The Japanese envoy on the occasion congratulated the minster on his appointment as the federal minister and assured of his complete support going forward.

The ambassador, in context of a recent high-level economic policy dialogue, expressed his government’s intention of providing financial support for the implementation of high value flagship projects in the areas of sanitation & waste management, clean drinking water and human resource development, including health & education, technical assistance & skill development etc., to enhance the productivity of Pakistan’s economy.

The Japanese envoy also offered his support for the promotion of export and discussed ways to increase bilateral trade volume between the two countries.

He conveyed a keen interest of Japanese companies for investment in Pakistan, particularly in the export-oriented and import-substitution industries, including agriculture value chains, fisheries, food processing, home electronics, textile and auto part sectors.

The minister thanked the Japanese ambassador for his support and reiterated the government’s resolve to facilitate Japanese investors in Pakistan.