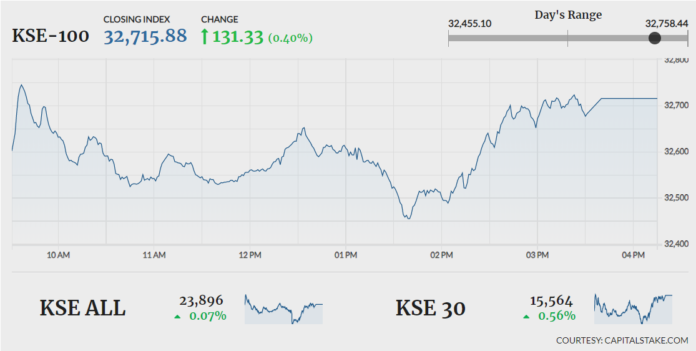 KARACHI: The Pakistan Stock Exchange (PSX) managed to close another session in the green amid range-bound trading and low market turnover. Foreign investors closed the previous session (Monday) as net buyers with a net inflow of only $0.343 million.

According to news reports, Pakistan has borrowed $16 billion foreign loans in one years’ time in order to avoid being a defaulter of international debt obligations as well as to finance its imports. Out of the total amount, the incumbent government borrowed $13.6 billion worth of loans (highest amount taken by any government in a single year), while the remaining $2.4 billion were received in July 2018 during the tenure of the caretaker government.

The cement sector ended as a major contributor to KSE-100, as it added 42.55 points to the index, while food and personal care products sector continued to drag the index for the second consecutive session, pulling it back by 14.57 points.

On the market front, Honda Atlas Cars (Pakistan) Limited (HCAR +2.59pc) declared its financial results for the first quarter of FY20. The company’s sales declined by 25pc while it’s earning per share depreciated from Rs7.36 in 1QFY19 to Rs1.69 in 1QFY20.

Meanwhile, Pakistan Tobacco Company Limited (PAKT 0.00pc) announced its financial performance for the second quarter of FY19. The company declared an interim cash dividend of Rs13 in addition to financials. Sales appreciated by 21pc YoY, while earnings per share increased from Rs10.55 in the same period last year to Rs16.68 in the current year.