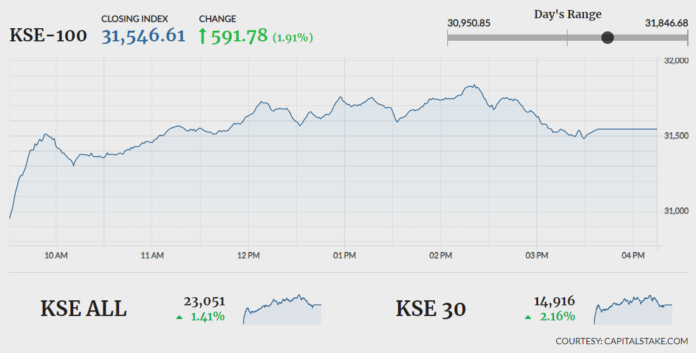 KARACHI: Bulls dominated the Pakistan Stock Exchange (PSX) for the second consecutive session of the week, as the indices extended gains from the preceding session amid increased market participation.

According to analysts, the recently-conducted Asia Pacific Group’s meeting in Bangkok gave positive signals to the market that up till now, Pakistani government’s efforts were moving in the right direction and its plans to counter and curb money laundering had proved fruitful.

Another soothing factor for the market is the monetary stance, which is seen to maintain a status quo as the interest rate has now peaked off. The speculations over a softening or maintenance of monetary policy stance by the State Bank of Pakistan gained momentum after a change of weights in consumer price index (CPI) calculation mechanism that led to an ease in inflation figures.

Hub Power Company Limited (HUBC +1.71pc) declared its financial results for FY19. The company’s revenue declined by 53pc, finance cost surged by 121pc, while earnings per share declined from Rs7.15 in FY18 to Rs6.70 in FY19.