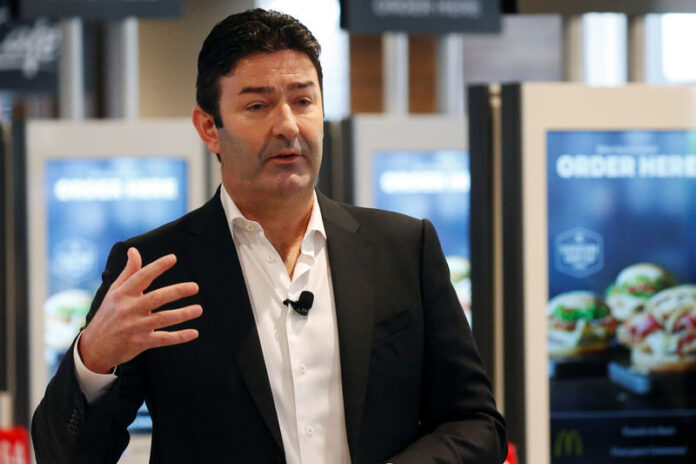 The surprise exit of McDonald’s Corp chief executive officer, Steve Easterbrook, over the weekend has Wall Street wondering whether the burger chain’s multi-billion dollar strategy to boost sales could change under the new head.

Chris Kempczinski, who was in charge of McDonald’s operations in the United States, took over from Easterbrook on Sunday, following his dismissal over a recent consensual relationship with an employee, which McDonald’s board determined violated company policy.

Piper Jaffray & Co on Monday downgraded the stock to “neutral” from “buy”, citing the likely disruption from a sudden change of this magnitude.

“Our experience leads us to take a more cautionary view noting the potential lack of momentum and time involved in formalising a new team,” analyst Miller Regan said.

Kempczinski has inherited the top spot at the world’s largest fast-food chain when its struggling to bring in more customers at its restaurants amid a shift to healthier food choices and delivery apps available at their fingertips.

McDonald’s has spent billions to modernize stores, add digital kiosks and automate parts of the ordering process as part of its turnaround plan under Easterbrook, who took over as the CEO in 2015.

He was credited with franchising 95pc of McDonald’s US fleet, launching the popular all-day breakfast, revamping restaurants to add digital ordering kiosks and making tech acquisitions to remodel stores. The company’s stock has nearly doubled in value under him.

“Easterbrook was a change-agent at McDonald’s and his leadership, particularly in the face of difficult decisions … will be missed,” Wells Fargo analyst Jon Tower said.

For Kempczinski, a Harvard alumnus, the biggest challenge will be rapid changes in the industry and the push to grow restaurant traffic, especially after McDonald’s remodelling investments, a switch to fresh beef and cheaper menu items that weighed on margins and service time.

“We are unsure how McDonald’s strategy might change under Kempczinski’s leadership as most major initiatives are already well underway,” said BTIG analyst Peter Saleh.