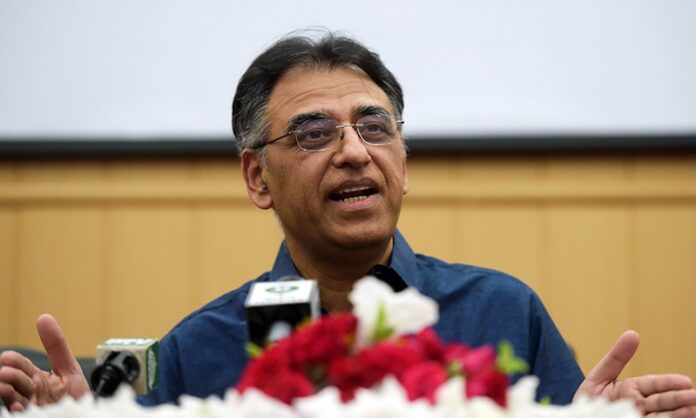 ISLAMABAD: Planning and Development Minister Asad Umar said on Tuesday that efforts were being made to bridge the digital gap between the urban and remote areas.

“The Universal Service Fund has been helpful in this regard as it developed telecommunication services in the unserved as well as underserved areas of the country,” he said while addressing the first session of the three-day International Sustainable Development Conference organised by Sustainable Development Policy Institute (SDPI) in Islamabad.

The minister noted that revenue generation and documentation of economy are among the major challenges of the country, adding that latest technology is being utilized to achieve the desired results.

Most of the discussion from the panel was rhetoric about lauding the current government on bringing Pakistan towards digital economy, improvement in ease of doing business ranking, and government’s plan to improve and increase technological influences in ways of operating.

However, some speakers did point out useful and practical steps on how to improve the implementation and utilization of technology in improving the economy as well as efficiency in other regulatory areas.

Sharif Haroon said that Pakistan needs to learn from other countries with respect to how they formed strategic partnerships. He said with changing times, students and youngsters also have to move towards skills likely to be demanded in the future as opposed to only the skills in demand today.

Aisha Pasha said while the implementation of biometric system brought out visible betterment, Pakistan still has a long way to go before it can become a digital society. She added that digital monitoring of vaccinations helped the government and that technology is the way forward to improve governance.

Another session on Emerging Technologies and Regional Stability discussed water management and the fourth industrial revolution. Speakers of the session opined that the impact of this revolution for Pakistan will be determined by the methods implemented for upgrading skills of the workforce and the time it takes to respond to global changes.

World Bank Country Director for Pakistan Illango Patchamuthu also participated in the session on digital technology and e-payments. UN Expert Ali Saleem said that there is an obvious policy gap in Pakistan on youth and peacebuilding and it may take another three decades to achieve the potential.

Dr Rajan Sudesh Ratna from United Nations ESCAP said that women cannot only be empowered through social means rather economic empowerment is the key. “Both India and Pakistan are lacking in gender equality,” he said.

During the conference, it was also highlighted that the private sector in Pakistan is willing to work in the renewable energy sector and they must be facilitated in doing so.

Fatima Khushnud from Independent Power Plants Association said that the price of energy cannot be reduced or controlled unless old energy plants are decommissioned.

Economist and former finance adviser Sartaj Aziz got candid in his statements during the discussion on provincial development, saying that developmental projects should not be restricted to Punjab alone but should be spread all across the country.

Senator Shibli Faraz opined that a separate ministry for renewable energy must be established.