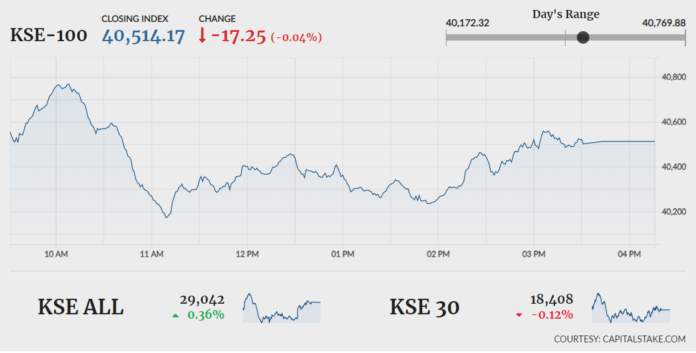 KARACHI: Continuing with the trend from the previous session, the Pakistan Stock Exchange (PSX) ended a range-bound session flat on Thursday.

Foreign investors ended as net sellers for the second consecutive session on Wednesday. A net inflow of $0.826 million was recorded with major selling witnessed in the banking sector.

On the economic front, the country’s exports grew by 9.35pc to $2,011 million in November 2019 as compared to the same month last year. Imports decreased by 14pc to $3,940 million over the corresponding month last year. This helped the trade deficit to decline by 29.65pc.

The overall trading volumes shrank from 305.03 million in the previous session to 227.02 million. Shares worth Rs8.41 billion were traded in Thursday’s session. Unity Foods Limited (UNITY +1.64pc) turned out to be the volume leader of the day, followed by TRG Pakistan Limited (TRG -3.96pc) and Fauji Foods Limited (FFL -1.33pc). The scripts had exchanged 37.75 million, 12.90 million and 11.01 million shares, respectively.