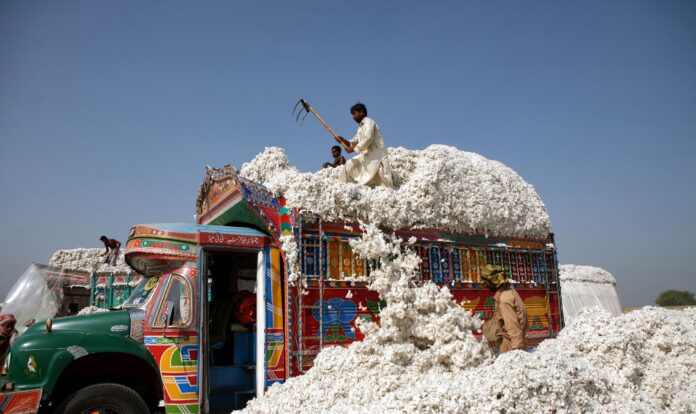 LAHORE: Pakistan, once the proud home to world’s best cotton, has missed its 2019 target of producing 15 million cotton bales by seven million bales, owing to multiple factors, including climate change, lack of proper research by local research institutes and no cotton policy on the top.

On October 4, the Cotton Crop Assessment Committee (CCAC) forecasted cotton production at the end of the year at 10.20 million bales against the target of 15 million bales. In the final weeks, bad luck had struck in the form of harsh weather, further reducing the guessed figure to eight million bales.

Given the history of bleak figures in the last few years, it is feared cotton areas may give in to some other instant cash crops.

Talking to Profit, a member of the Cotton Crop Assessment Committee (CCAC) said, “Pakistan is losing cotton areas necessary for the production of bales… the production is constantly declining as cotton growers are not getting a good amount of yield due to which they are switching to other crops which could maximize their revenues,” he said.

When asked about the major reason behind the decline in cotton production, he said, “Unfortunately, cotton research institutes are not doing their jobs properly; the pests are damaging the cotton crop badly as they become immune and we don’t help much in killing them.

“So, it requires constant and state of the art research to deal with the threat of pests. Research is also important in deciding which fertilizers or seeds to use. This, unfortunately, is not being done properly at the moment.”

He further said that due to lack of research, out of Pakistan’s total cotton bales production, only 5pc is long-staple cotton.

Aqib Khan Niazi, a cotton farmer from Badin, Sindh, said, “In 2019, my cotton crop was badly damaged… yield from 300 acres (121.4 hectares) was reduced to only 100 kgs/acre which demoralized me and I am planning to switch to some other crop this year.”

Upon contact, Dr Ghulam Sarwar, Cotton Botanist at Cotton Research Institute, Faisalabad, denied that they are not working properly, saying, “There are numerous other factors due to which Pakistan’s cotton production is declining, including weather and farmers switching to other crops,” he added.

“We can’t force farmers to grow cotton instead of rice, wheat or any other crop,” he said.

PTI’s Muhammad Ameer Sultan, who is serving as Parliamentary Secretary, Ministry of National Food Security and Research, said that due to humid weather, pests attacked a large number of cotton bales, which is why the government failed to achieve the target of 15 million bales for in 2019.

It is pertinent to mention that despite a decrease in local cotton bales production, there is also a decline in the import of cotton bales by 33pc. The cotton bales imports from July to November in 2018-19 were 0.307 million bales approximately which decreased to 0.206 million bales.

“The government had imposed 3pc regulatory duty, 2pc additional customs duty and 5pc sales tax on import of cotton from August 1, 2019, due to which spinning mills across Pakistan were reluctant to import it,” said director of one of the spinning mills who did not wish to be named.

These duties were withdrawn in January-February 2017 and were re-imposed in July-August 2019.

In order to meet the cotton demand, the government on December 30, 2019, during the Economic Coordination Committee (ECC) meeting, waived off all duties and taxes on import via Torkham Border (land route) from Afghanistan and other Central Asian States. This will be effective from 15th January 2020.

Talking to Profit, APTMA’s Executive Director Raza Baqir welcomed the ECC move of waiving off all duties and taxes on import via Torkham Border.

“The govt should ensure proper implementation and enforcement by border agencies to stop pilferage of cotton bales through smuggling,” he said.

He added that govt should also work on the up-gradation of ginning technology, capacity building of farmers and introduce incentives for better quality cotton that would help in motivating the farmers.

Baqir said that measures should also be taken for the production of long-staple cotton for value-added products including high-quality cotton shirts.