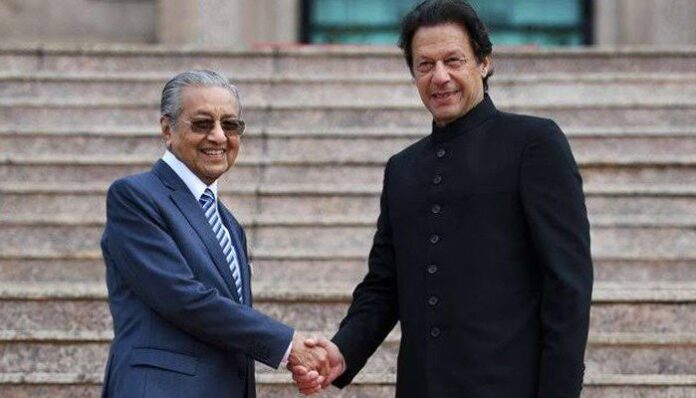 This was stated in a joint statement issued at the conclusion of Prime Minister Imran Khan’s two-day visit to Kuala Lumpur.

According to the joint statement, both countries have firmly stressed that the question of Palestine, situation in Jammu and Kashmir and the Rohingyas issue should be resolved on the basis of relevant UN resolutions and international human rights law.

“The two sides have agreed to encourage their respective chambers of commerce and industry to undertake necessary initiatives to promote private sector driven bilateral trade and investment ties.

“Pakistan International Airline will soon be adding a new direct flight from Lahore to Kuala Lumpur to cater to the increasing number of Pakistani travellers to Malaysia,” the statement read.

It was agreed that the relevant bodies from both countries would collaborate and share their successful practices and tools in revenue collection and taxation. They also agreed to collaborate in the heavy industry sector, halal food industry, services and consumer products.

It is pertinent to mention that PM Imran on Monday arrived in Kuala Lumpur on a two-day official visit to the country on the invitation of the Malaysian prime minister.

The premier was received by Malaysia’s Defence Minister Mohamad Sabu and senior officials of the Malaysian government upon his arrival at Bunga Raya Complex, Kuala Lumpur International Airport. High Commissioner of Pakistan in Malaysia Amna Baloch and officers of the high commission were also present.

Speaking at a press conference after talks between both prime ministers, Malaysian PM Mahathir had said, “We agree on the need for regular discussions to strengthen trade relations by removing barriers in key areas and addressing the bilateral goods imbalance.”