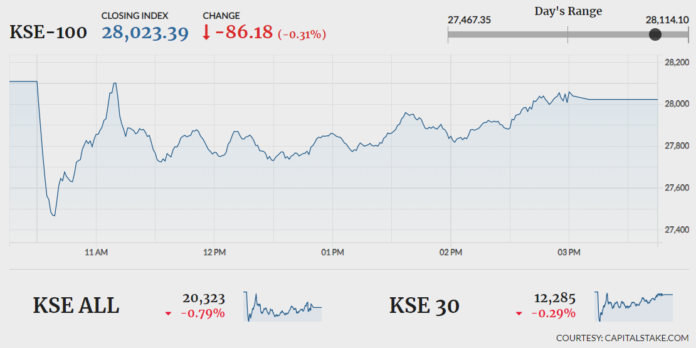 KARACHI: Investors of the Pakistan Stock Exchange (PSX) witnessed a volatile start to week, with the benchmark KSE-100 Index shedding 2.28pc intraday before gaining some lost ground towards the end.

Foreign investors continued with the selling trend during the previous week (March 23-27), recording a net outflow of $13.66 million.

According to market analysts, an increase in the number of coronavirus cases as well as the imposition of countrywide lockdowns continued to scare investors at the exchange. A slump in international crude oil prices, coupled with bearish performances by regional stock markets, also triggered selling pressure at PSX, they added.

In a notification to the exchange, Summit Bank Limited (SMBL +15.4pc) announced that it has received a letter from Naseer Abdulla Hussain Lootah (potential investor) wherein he has communicated his “intention to acquire at least a controlling stake in SMBL by subscribing to fresh equity in the bank and investing small amounts as necessary to ensure bank meets its Minimum Capital Requirement & Capital Adequacy Ratio”.

The execution of exclusivity agreement with potential investor will be discussed in the board meeting scheduled for 31st March.