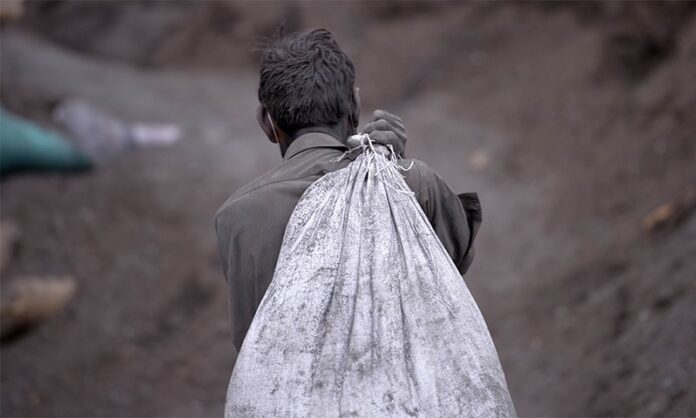 KARACHI: As many as 70.3pc of the country’s labour force “works without any written contract or agreement”, according to a research report titled “Poverty and Inequality amid a Pandemic in Pakistan – An analysis of labour market”.

This lack of economic documentation leaves a large proportion of the labour market vulnerable, as they remain unprotected by the law and at a greater risk of falling into the perils of poverty.

“With 50pc of the world’s GDP in lockdown, all kinds of markets are faced the ultimate test. The case of Pakistan’s labour market is no different,” stated the report compiled by Sarah Nizami and Muhammad Shahid Waheed, researchers at the Applied for Economics Research Centre in Karachi.

The report also covers how ‘working from home’ culture is furthering the scope of inequality in the country. “To work from home and to keep safe during a pandemic is a luxury not all can afford. When it comes to earning from home, the inequality is of two kinds, first being economic inequality while second being geographic.”

As per the authors’ analysis of the Labour Force Survey 2017-2018, only 8pc of the first three quintiles, i.e. the poorest, poor, and middle-income group, have the opportunity to work from home.

Managers have almost 89pc opportunity to work from home in comparison to zero per cent in the least earning occupations.

White-collar jobs, with most opportunities to earn from home, are not only the highest-paid but are also the most secure.

The study further analyzes the inequality between geographical locations. “While employees in some regions of the country have the luxury to obey the travel restrictions and work from home, the regions full of factories and lab workers do not have the same privilege.”

Justify this further, the report stated, “If poor families could somehow work from home, packed space and a higher number of household members could spread the infection faster and make working from home difficult.” 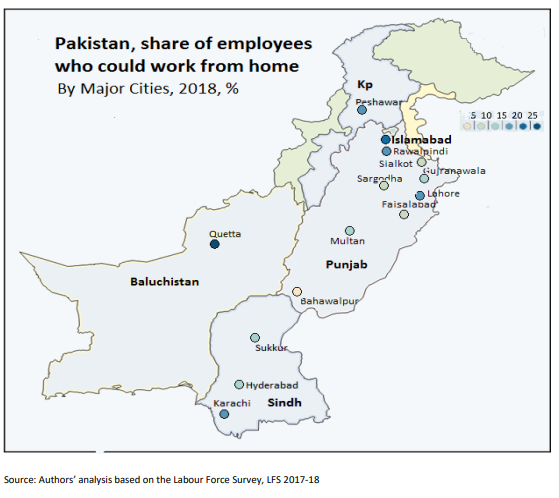 As per the study, a strong majority of Sindh’s vulnerable workforce is found in the argriculture, forestry and fishing sectors (25.2pc). This is followed by manufacturing (21pc) and construction (20.2pc).

For Punjab, the majority of the vulnerable labour force lies in manufacturing with 31.2pc, followed by 21pc in construction and 14.7pc in agriculture, forestry & fishing. In KP and Balochistan, construction industry tops with vulnerable labour at 36.5pc and 30pc, respectively. Manufacturing comes next in KP by 18.6pc, while the second in Baluchistan is agriculture (16pc).

The study further highlights how a significant proportion of the labour force does not have a written contract or agreement. This is due to the informal nature of the job or tax evasion on the part of the employer.

“While most secure jobs are with the federal or provincial governments, it is important to note that less than 25pc of the country’s population has permanent jobs. As seen, the biggest percentage (70.3pc) of the country are those who ‘work without a written labour contract or agreement’, thus becoming the most vulnerable group in the time of crisis.”

The report concludes that the most vulnerable occupation group in all provinces are the minimum wage essential workers who work without formal contact.

“Amidst lockdown, it is essential to track these minimum wage ‘no contract’ workers and provide them with aid through government and private philanthropy. For the layoffs to slow down, the government needs to consider a relief package for business, including waiving rents and utility bills so that the workers could be retained without businesses going bankrupt.”