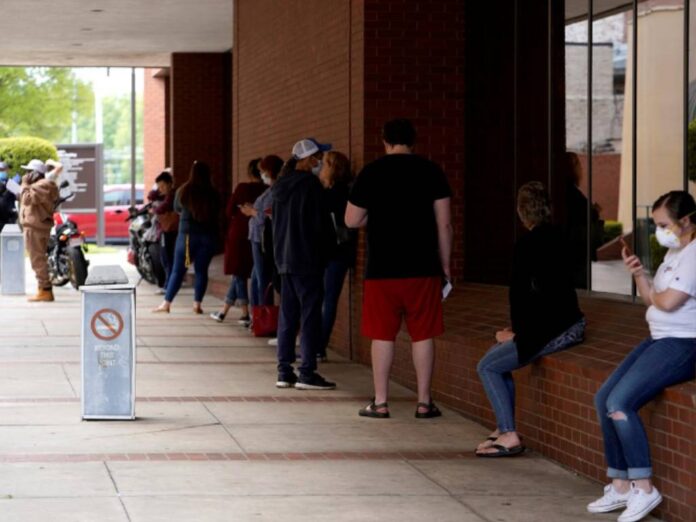 WASHINGTON: The US economy likely lost a staggering 22 million jobs in April, in what would be the steepest plunge in payrolls since the Great Depression and the starkest sign yet of how the novel coronavirus pandemic is battering the world’s biggest economy.

A report that is closely watched in any given month but especially so now with non-essential businesses in mandatory shutdowns nationwide to contain the coronavirus, the Labour Department’s monthly employment report on Friday is also expected to show the jobless rate surging to at least 16% last month. That would shatter the post-World War Two record of 10.8% touched in November 1982.

The numbers will likely strengthen analysts’ expectations of a slow recovery from the recession caused by the pandemic. It would add to a pile of bleak data on consumer spending, business investment, trade, productivity and the housing market in underscoring the devastation unleashed by lockdowns imposed by states and local governments in mid-March to slow the spread of COVID-19, the respiratory illness caused by the virus.

The economic crisis spells trouble for President Donald Trump’s bid for a second term in the White House in November’s election. After the Trump administration was criticised for its initial reaction to the pandemic, Trump is eager to reopen the economy, despite a continued rise in COVID-19 infections and dire projections of deaths.

“Our economy is on life support now,” said Erica Groshen, a former commissioner of the Labour Department’s Bureau of Labour Statistics. “We will be testing the waters in the next few months to see if it can emerge safely from our policy-induced coma,” added Groshen, who is now a senior extension faculty member at the Cornell University School of Industrial and Labour Relations.

The historic dive in April nonfarm payrolls predicted in a survey anticipates job losses in nearly all sectors of the economy, with larger layoffs in the leisure and hospitality industry – mainly restaurants and bars. It would follow the shedding of 701,000 jobs in March, which ended a record streak of employment gains dating to October 2010. Estimates in the survey ranged to as much as a loss of 35 million. Forecasts for April’s unemployment rate, which was at 4.4% in March, were as high as 22%. There is great uncertainty surrounding last month’s estimates because of the nature and speed of the job losses.

A total of 26.5 million people had filed claims for jobless benefits and 16.2 million were on unemployment rolls through the week of April 12, when the government canvassed establishments and households for payrolls and the unemployment rate. Eligibility for unemployment benefits has been greatly expanded to include contractors and gig workers among others, overwhelming local employment offices with applications and leading to backlogs. Economists believe the numbers of people applying for unemployment aid and those continuing to receive benefits are understated.

Meanwhile, some people might be filing more than one claim, and workers whose hours have been cut because of COVID-19 can also seek unemployment benefits.

Some workers who have filed claims have likely since found employment, with companies like Walmart and Amazon hiring workers to meet huge demand in online shopping. Truck drivers are also in demand, while supermarkets, pharmacies and courier companies need workers. According to the Labour Department’s Bureau of Labour Statistics, which compiles the employment report, a person has to be looking for work and available to do it to be considered unemployed.

“This means many workers who lose their job as a result of the virus will be counted as dropping out of the labour force instead of as unemployed because they are unable to search for work due to the lockdown, or because they are not available to work because they are, for example, caring for children whose school has closed,” said Heidi Shierholz, a former chief economist at the Labour Department.

Furloughed workers and others who expect to return to their jobs within 6 months are counted as unemployed on temporary layoff. A drop in the labour force participation rate, or the proportion of working-age Americans who have a job or are looking for one, could blunt some of the anticipated surge in the unemployment rate in April.

To get a clearer picture, economists will focus on a broader measure of unemployment, which includes people who want to work but have given up searching and those working part-time because they cannot find full-time employment.

April could, however, mark the trough in job losses as more small businesses access their portion of an almost $3 trillion fiscal package, which made provisions for them to get loans that could be partially forgiven if they were used for employee salaries. The Federal Reserve has also thrown businesses credit lifelines and many states are also partially reopening.

Still, economists do not expect a quick rebound in the labor market. “Given the expected shift in consumer behaviour reflecting insecurities regarding health, wealth, income, and employment, many of these firms will not reopen or, if they do reopen, hire fewer people,” said Steve Blitz, chief economist at TS Lombard in New York. “This is one reason why we see the underlying recession extending through the third quarter.”

Economists say the economy entered recession in late March, when nearly the whole  country went into COVID-19 lockdowns. The National Bureau of Economic Research, the private research institute regarded as the arbiter of US recessions, does not define a recession as two consecutive quarters of decline in real gross domestic product, as is the rule of thumb in many countries. Instead, it looks for a drop in activity, spread across the economy and lasting more than a few months.