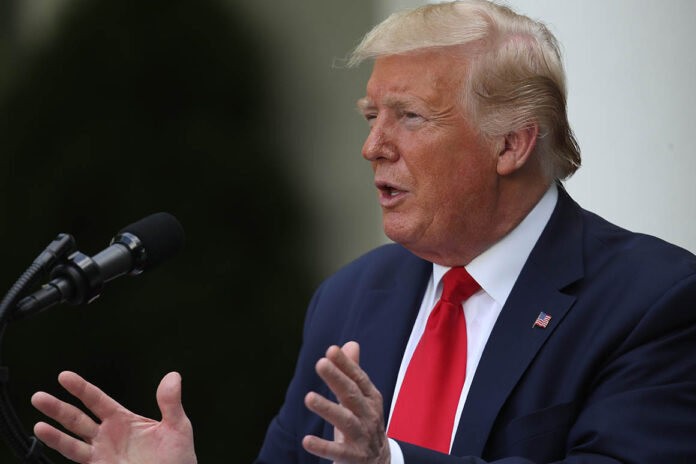 WASHINGTON: US President Donald Trump is expected to order a review of a law that has long protected internet companies, including Twitter and Facebook, an extraordinary attempt to intervene in the media that experts said was unlikely to survive legal scrutiny.

News of the proposed executive order came after Trump attacked Twitter for tagging the president’s tweets about unsubstantiated claims of fraud in mail-in voting with a warning prompting readers to fact-check the posts.

The draft order seen by Reuters directs federal agencies to modify the way a law known as Section 230, which protects internet companies from liability for content posted by their users, is implemented. It also orders a review of alleged “unfair or deceptive practices” by Facebook and Twitter, and calls on the government to reconsider advertising on services judged to “violate free speech principles.”

Officials said on Wednesday that Trump would sign the order on Thursday, although it was not listed on Trump’s official schedule for Thursday released by the White House. The White House, Facebook and Twitter declined comment.

The draft order, as written, attempts to circumvent Congress and the courts in directing changes to long-established interpretations of Section 230. It represents the latest attempt by Trump to use the tools of the Presidency to force private companies to change policies that he believes are not favourable to him.

“The president is trying to frighten, coerce, scare, cajole social media companies to leave him alone and not do what Twitter has just done to him,” said Jack Balkin, a Yale University constitutional law professor.

He called the order “mostly smoke and mirrors” that would likely have little effect legally.

Still, Twitter’s shares were down 2.5pc on Thursday. Facebook and Google parent Alphabet Inc were up slightly.

Trump, who uses Twitter heavily to promote his policies and insult his opponents, has long claimed without evidence that the service is biased in favour of Democrats. He and his supporters have levelled the same unsubstantiated charges against Facebook, which Trump’s presidential campaign uses heavily as an advertising vehicle.

US House Speaker Nancy Pelosi called Trump’s planned order “outrageous” and a “distraction” from the current coronavirus crisis, and criticized tech companies for their selective action or inaction regarding harmful or false posts.

The protections of Section 230 have often been under fire for different reasons, with critics arguing that they give internet companies a free pass on things like hate speech and content that supports terror organizations. Senator Josh Hawley has introduced legislation to change to law, but that effort is in its early stages.

Social media companies have been under pressure from many quarters, both in the United States and other countries, to better control misinformation and harmful content on their services.

Twitter Chief Executive Jack Dorsey said on the company’s website late Wednesday that the president’s tweets “may mislead people into thinking they don’t need to register to get a ballot. Our intention is to connect the dots of conflicting statements and show the information in dispute so people can judge for themselves.”
Steve DelBianco, president of NetChoice, a trade group that counts Twitter, Facebook and Google among its members, said the proposed executive order “is trampling the First Amendment by threatening the fundamental free speech rights of social media platforms.”
Matt Schruers, president of technology group the Computer & Communications Industry Association, said “retaliation against the private sector for fact-checking leadership is what we expect from foreign autocracies, not the United States.” The executive order would call for the Federal Communications Commission (FCC) to propose regulations for Section 230, part of a 1996 law called the Communications Decency Act.

The order asks the FCC to examine whether actions related to the editing of content by social media companies should potentially lead to the firms forfeiting their protections under section 230.

It requires the agency to look at whether a social media platform uses deceptive policies to moderate content and if its policies are inconsistent with its terms of service.

The draft order also states that the White House Office of Digital Strategy will re-establish a tool to help citizens report cases of online censorship. The tool will collect complaints of online censorship and submit them to the Department of Justice and the Federal Trade Commission (FTC).

It requires the FTC to look into whether complaints violate the law.

The FTC did not respond to requests for comment. FCC Commissioner Jessica Rosenworcel, a Democrat, said an executive order that would turn the FCC “into the President’s speech police is not the answer. It’s time for those in Washington to speak up for the First Amendment.”

Federal spending on online advertising will also be reviewed by US government agencies to ensure there are no speech restrictions by the relevant platform.