PM Imran says no to complete lockdown in Punjab 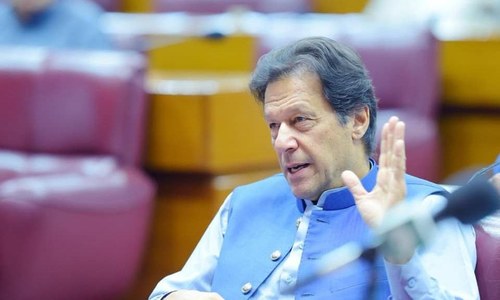 –Says people are not taking Covid-19 seriously, ‘they think it is like the flu’

LAHORE: Even though there has been no let-up in the spike of the Covid-19 cases in Punjab, especially Lahore, Prime Minister Imran Khan on Saturday ruled out a complete lockdown during his visit to the provincial capital.

The premier’s visit to the provincial capital comes a day after the Punjab government had sent recommendations to the federal government to tighten lockdown measures in a bid to curb the growing number of Covid-19 cases.

However, on his visit, PM Imran held meetings with Chief Minister Usman Buzdar and Governor Chaudhry Sarwar, wherein it was decided that a strategy of “smart lockdowns” will be pursued and the government would ensure strict adherence to standard operation procedures (SOPs).

Addressing a press conference in Lahore alongside CM Buzdar, Punjab Health Minister Dr Yasmin Rashid and his advisers, the PM said: “After analysing with my Punjab team today, [we’ve decided that] we will not impose a lockdown but will impose selective lockdowns — trace and seal hotspot.”

Reiterating his stance over lockdown, he said it would have meant complete economic closure and destruction of economy. Pakistan has a different economic situation compared to Singapore, Taiwan, or Thailand, which are less populous and have no issues implementing social distancing protocols, he added.

About 25 per cent population of Pakistan are living below the poverty line, he said and added that if the economic activities were halted, it would have burdened the lower-income groups, daily wagers and labourers.

The prime minister said the smart lockdown was the only solution to the current situation.

He mentioned that the government took steps to keep the wheels of the economy moving and save the common man from financial burden. The government faced difficulties in presenting the current fiscal budget.

Noting that the public had made light of government-mandated SOPs so far, the premier warned that from now on there will be “consequences” if Covid-19 SOPs weren’t followed.

“We were leaving it on you [the public] until today but unfortunately I did not see people taking it seriously. People think it is like the flu,” PM Imran said, adding that the government had now come up with a system to crackdown on violations and apprehend those behind them.

It may be noted here that PM had in March told the nation that coronavirus was just a flu and that people would recover soon after contracting it.

Elaborating on the system, Dr Faisal Sultan, the prime minister’s focal person on coronavirus, said the government had prepared a “modern and sophisticated” software to help it identify coronavirus hotspots around the country.

“This will allow the administration to implement and enforce stricter restrictions, or in other words, a smart lockdown,” he said.

Prime Minister Imran added that volunteers of the government’s Corona Relief Tiger Force will go into these areas [hotspots] and report violations of SOPs in the month of July.

“Our Tiger Force will use technology to report violations of SOPs and we will act on their complaints,” he said.

Punjab Health Minister Dr Yasmin Rashid claimed that 10,000 Covid-specific beds were available in the province where out of 3,055 admitted patients, 215 were critical and 193 on ventilators.

She said on average 40 percent of the health facilities were vacant and available for the coronavirus patients in the province.

She thanked the prime minister for ordering the National Disaster Management Authority to provide 1,000 oxygenated beds to the province and allowed Roche company to import the much-needed Actemra injections from the United States other than Japan. But she strongly forbade the people to use the medicine without the expert advice for having adverse impacts in certain conditions.

Provincial Finance Minister Hashim Jawan Bakht said Bulgaria and South Korea had controlled the disease with the cooperation of volunteers. A specified mobile app had been designed to help the volunteers report the SOPs’ violations directly to the administration.

Earlier this month, it had emerged that on May 15 an alarming summary was presented by the Punjab Primary and Secondary Healthcare Department to CM Buzdar according to which “no workplace and residential area of any town was disease-free” in Lahore, Punjab’s capital, and that the total number of cases in the city were estimated at around 0.7 million.

Advising the chief minister to immediately enforce a complete lockdown for “at least four weeks”, the summary had said that a smart lockdown would not work since all areas of the city had been impacted by the disease, adding that asymptomatic cases had become the “main source of infection and local transmission” in the metropolis.