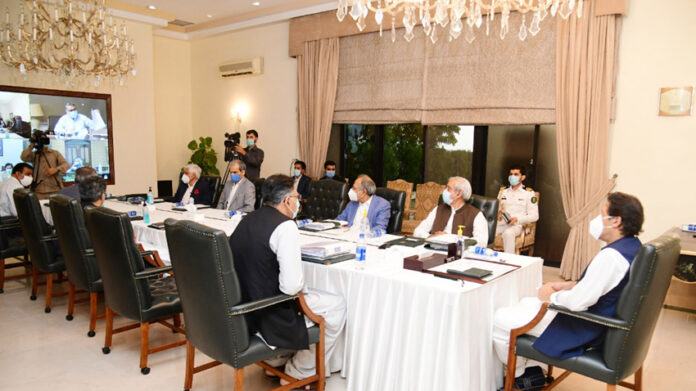 ISLAMABAD: The federal cabinet on Tuesday welcomed the Islamabad High Court’s (IHC) verdict in the sugar inquiry case and reiterated its resolve to bring those who made undue profits to task.

Briefing the media about the federal cabinet’s meeting on Tuesday, Federal Minister for Information and Broadcasting Senator Shibli Faraz said that the cabinet decided that the recommendations of the committee should be materialised within stipulated time.

The minister said this step will bring improvement and transparency in the whole value chain of sugar production. He said that the process of determining the prices of sugar will be visible in the next three months and will result in the provision of the commodity to people at reasonable rates.

He also said that the federal cabinet expressed concern on the rising price of flour and endorsed the instructions of Prime Minister Imran Khan to rectify the situation. A committee under Advisor to Prime Minister on Finance Hafeez Shaikh will monitor and supervise the situation to streamline the process and make it transparent.

Faraz said that the prime minister directed to determine the demand and supply of flour on a scientific basis. He said that 27 million tonnes of flour is the national requirement with availability of 25 million tons. He said that Punjab government has been directed to release 900,000 tonnes of wheat from its stores to overcome the shortage of commodity. He added that steps are being taken to stop smuggling of wheat as well as bringing transparency in its availability.

The minister said that the federal cabinet discussed and appreciated the performance of the Ministry of Education for introducing a uniform curriculum in the country. The cabinet discussed the use of online education by utilising modern technologies in the post-coronavirus environment and the prime minister emphasised on making this facility available in far-flung areas of the country, especially Balochistan, he added.

The minister said that the premier is determined to improve the health system in the country.

He said that Planning Minister Asad Umar and Special Assistant on Health Dr Zafar Mirza gave a detailed briefing to the meeting on prevalent Covid-19 situation.

Faraz said that in a short span of time, the laboratories in the country for coronavirus testing have reached 129 from two. He said that the testing capacity has increased to 50,000 tests daily from initial 472.

The minister said that 770 hospitals in the country are catering to the needs of coronavirus patients. He said that the number of oxygenated beds available in the country is 8,886, of which 2,671 are occupied. He also said that 2,150 more beds will be available by next month. He added that the government is very clear from day one on how to take steps to overcome the coronavirus disease.

Faraz said that PM Imran’s vision from the beginning is to run the economy as well as protecting the lives of people.

He said that said India and Brazil both suffered immensely due to their extreme strategies to counter the disease.

He added that the government adopted the best strategy keeping in view the ground reality to tackle the situation arising out of coronavirus.

He further said that the meeting gave approval to construction of a teaching hospital in Islamabad. The cabinet also deliberated on optimum use of the properties of Evacuee Trust Property Board (ETPB), he added.

ZERO TOLERANCE FOR SMUGGLING AND HOARDING

Separately, PM Imran on Tuesday directed all the provincial chief secretaries to ensure zero-tolerance policy over wheat smuggling and hoarding and also formulate a long-term strategy in view of the country’s future requirements.

While chairing a meeting to review steps taken to reduce prices of wheat and flour in the country, the prime minister also directed for immediate implementation of all the decision taken in consultation with the provincial governments in this regard.

The finance adviser briefed the prime minister about the decisions taken in consultation with the provincial governments to meet the requirements of wheat and flour besides, reduction in the prices of these commodities.

Addressing the participants of the meeting, the prime minister stressed that it was the government’s priority to ensure sufficient availability of wheat in accordance with the country’s requirements besides, controlling prices of wheat and flour.

He underlined that it was his government’s priority to protect interests of the poor segment of society so that they could not be burdened.