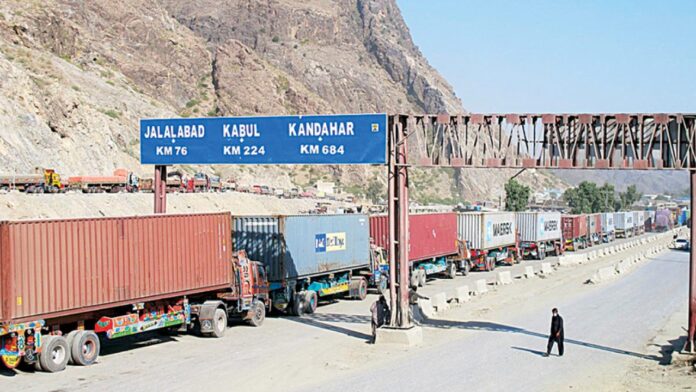 PESHAWAR: The Sarhad Chamber of Commerce and Industry has demanded the government to withdraw standard operating procedures at the Torkham border, besides removing hurdles in the way of Pak-Afghan mutual and transit trade.

The demands were made by SCCI Senior Vice President Shahid Hussain during a meeting with Transit Trade (Karachi) Director-General Raza Ahmad Khan at the Model Customs House, Peshawar.

Sarhadi said that following the directives of Federal Board of Revenue, a 100pc examination of transit trade containers is being carried out at Karachi port, while additional checking of goods trucks also conducted at Torkham border, which, he attributed, as the main reason behind the slowdown of the mutual and transit trade with Afghanistan.

The FCCA president urged the authorities concerned to conduct only 5 per cent examination of containers at Karachi port to accelerate the bilateral and transit trade between the two neighbouring countries. He also stressed the need for installation of more scanning machines at the Karachi port and signing agreement with multiple companies for the tracker system.

He stressed that the clearing and checking process of transit trade containers/trucks should be expedited at Karachi port and Torkham border. He demanded to dismantle the illegal terminal at Matani near Bara, which should be run through customs authorities.

Furthermore, he asked to allow empty trucks and containers stuck on the Afghanistan side to move to the Torkham border to their final destination Karachi in order to overcome the trackers’ shortages issue at the port.

Sarhadi urged the federal government to withdraw SRO 121 and besides container cargo, the transportation of loose-cargo to Afghanistan would also be allowed, which can remove the monopoly of bonded carriers. He suggested the holding meeting of Pak-Afghan Joint Liaison Committee after two months.