Tania Aidrus was sacked, did not resign 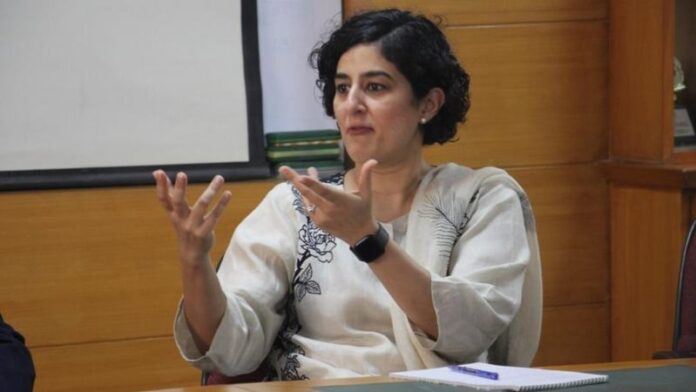 ISLAMABAD: Tania Aidrus, special assistant to the prime minister on e-governance and head of the much-touted Digital Pakistan Vision initiative, has announced to resign from her post citing recent criticism levelled against her and the government due to her dual nationality.

Sharing the signed resignation letter on her Twitter page, she wrote, “Criticism levied towards the state as a consequence of my citizenship status is clouding the purpose of Digital Pakistan. In the greater public interest, I have submitted my resignation from the SAPM role. I will continue to serve my country and the PM’s vision to my best ability.”

Criticism levied towards the state as a consequence of my citizenship status is clouding the purpose of Digital Pakistan. In the greater public interest, I have submitted my resignation from the SAPM role. I will continue to serve my country and the PM’s vision to my best ability pic.twitter.com/BWBvBvO6uz

Tania left her job of 12 years at Google where she served in various leadership roles, her last one being “Director, Product, Payments for Next Billion Users”, to join PM Imran Khan’s Digital Pakistan initiative in February, and was appointed SAPM for the same purpose.

Profit has learnt that this resignation was on the cards for close to two months, which is when Jehangir Tareen was practically ousted from the party due to the sugar crisis probe and was the one who arranged the first meeting between Aidrus and the PM last year that materialized into the latter’s vision for ‘Digital Pakistan’. Sources told Profit that Principal Secretary to Prime Minister Azam Khan invited the former SAPM to his office this morning, where Advisor to the Prime Minister on Accountability Barrister Mirza Shahzad Akbar was also present. There she was asked to sign the resignation letter.

When she protested and asked to speak to the prime minister, she was told that this resignation was not optional, that she had to sign it and the PM would not be able to speak to her. Therefore, while the letter points to criticism on Aidrus; foreign nationality being the chief reason for her resignation, the actual motives behind her removal are much different.

As confirmed by Federal Minister for Science and Technology Fawad Chaudhry in an interview, infighting within the PTI between Jehangir Tareen, Asad Umar and Shah Mehmood Qureshi restricted the party from performing well. Mr. Tareen’s attempt to limit the role of the bureaucracy in federal government business was reportedly fiercely opposed by Azam Khan. The sugar crisis probe provided an opportunity for an ‘anti-Jehangir Tareen camp’ to push him out of the party.

Rumours of difficulties between Tania and CEO of National Information Technology Board (NITB) Shabahat Ali Shah are also not unheard of. Sources privy to the progress of Digital Pakistan revealed that there was an expectation from Tania that she would arrange funding from international donors such as World Bank for Digital Pakistan but no such deals were ever finalized. These reasons also contributed to her being removed.

Last month, Profit published a report in which the role and status of a non-profit organization by the name of “Digital Pakistan Foundation” (DPF) was questioned as it had on its board Tania Aidrus, Jehangir Khan Tareen and  Careem CEO Mudassar Sheikha. That the company was registered as a separate entity under with the Securities and Exchange Commission of Pakistan (SECP) exactly one week prior to her appointment as the SAPM, raised concerns of a conflict of interest as the DPF was created to compliment the Digital Pakistan Initiative (DPI) that would come directly under the Prime Minister’s Office, headed by Tania Aidrus. According to a report by ARY, Tania was unable to satisfy the PM on the role and circumstances under which the DPF was created and was therefore removed from here SAPM role.

Profit’s made repeated attempts to contact Tania Aidrus and Mirza Shahzad Akbar for comment but failed to get any response.