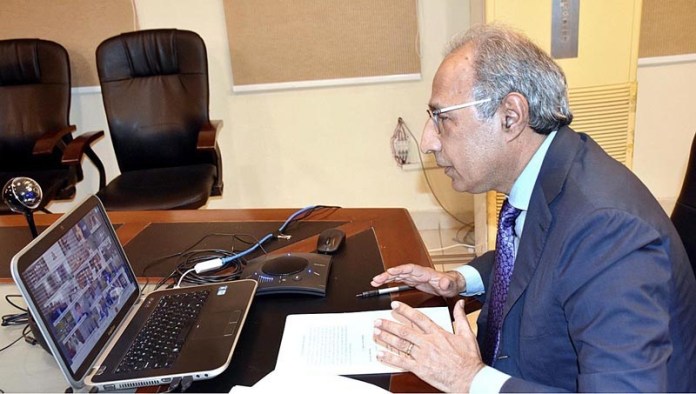 ISLAMABAD: Adviser to Prime Minister on Finance Dr Abdul Hafeez Shaikh on Wednesday that despite fiscal constraints after the pandemic, the government devised a strategy to provide relief to people and businesses through direct cash transfers.

Dr Hafeez Shaikh said this while virtually addressing the ministers and governors of Middle East, North Africa, Afghanistan and Pakistan (MENAP) during the ‘Managing Director IMF’s Interaction with Ministers and Governors of the Region’.

He said that the government was sharing the load of various expenditures of small businesses, adding that Covid-19 had undone a considerable share of the government’s achievements.

He pledged that the government was committed to providing employment and fighting inequality.

“The government wants to continue economic reforms but there are two real challenges; arranging funding for pro-poor expenditures and prioritizing the need for development spending,” he reiterated. “Incurring more expenditure to provide for the people at or below the poverty line will require more borrowing, as it will not be possible to increase taxes at a time of declining growth in the economy.”

The adviser stressed the need to adopt a coherent development strategy with the partner countries in the region. “No matter how fair or transparent the governments are in their intentions and operations, this unusual situation has made them realize that there is a need to engage with friends and development partners for technical advice and financial support purposes.”

The meeting focused on the impacts of the coronavirus on the economies of the region, lessons learnt through the experiences and policy guidelines to be adopted to deal with the crisis of such magnitude which has caught the world by surprise.

The participants agreed that the virus has exposed the world’s need for health spending and to focus more on technological solutions to various problems. It was observed that after the first wave of the pandemic almost all the countries have lost a significant share of their GDP and unemployment has become the biggest challenge.

The participants agreed if the second wave comes, losses would be massive and the achievement made by some countries during the crisis would be lost if the preventive measures are not adopted as a part of their everyday life.

They praised the Debt Suspension Initiative of the G-20 and said that there was also a need to provide more finances to the vulnerable economies. It was a consensus that employment generation, equality and inclusion would be the new challenges from the perspective of women and youth and new strategies would be needed to help the women and youth in the region.