ISLAMABAD: The Federal Board of Revenue (FBR) on Wednesday sealed an office of the Pakistan Mobile Communication Limited (PMCL) due to non-payment of income tax amounting to Rs25.3 billion.

According to documents available with this scribe, the FBR’s Large Taxpayers’ Office-Islamabad has sealed PMCL’s F-8 office over non-payment of Rs22.03 billion income tax (Rs3.3 billion default surcharge) for the tax year 2018.

“PMCL is an existing taxpayer falling in the jurisdiction of this office [LTU Islamabad]. An income tax amount of Rs25,393,653,480 was outstanding against the said company, which has been refraining from clearing its liabilities deliberately, dishonestly and without any lawful excuse, thus causing huge loss to the national exchequer,” the documents read.

“Therefore, on the basis of facts stated inter alia, I, Ahmad Shakeel Babar, Deputy  Commissioner Inland Revenue, in exercise of the powers vested in me in terms of section 138 of the Income Tax Ordinance, 2001 read with section 48 of the Sales Tax Act, 1990, order to seal the business premises of the defaulter till the payment of outstanding dues in full or withdrawal of this order.”

It was further stated that any non-compliance/defiance to this order shall be tantamount to obstruction in discharge of functions of an income tax authority and shall be punishable on conviction with a fine or imprisonment for a term not exceeding one year or both under section 196 of the Income Tax Ordinance, 2001. 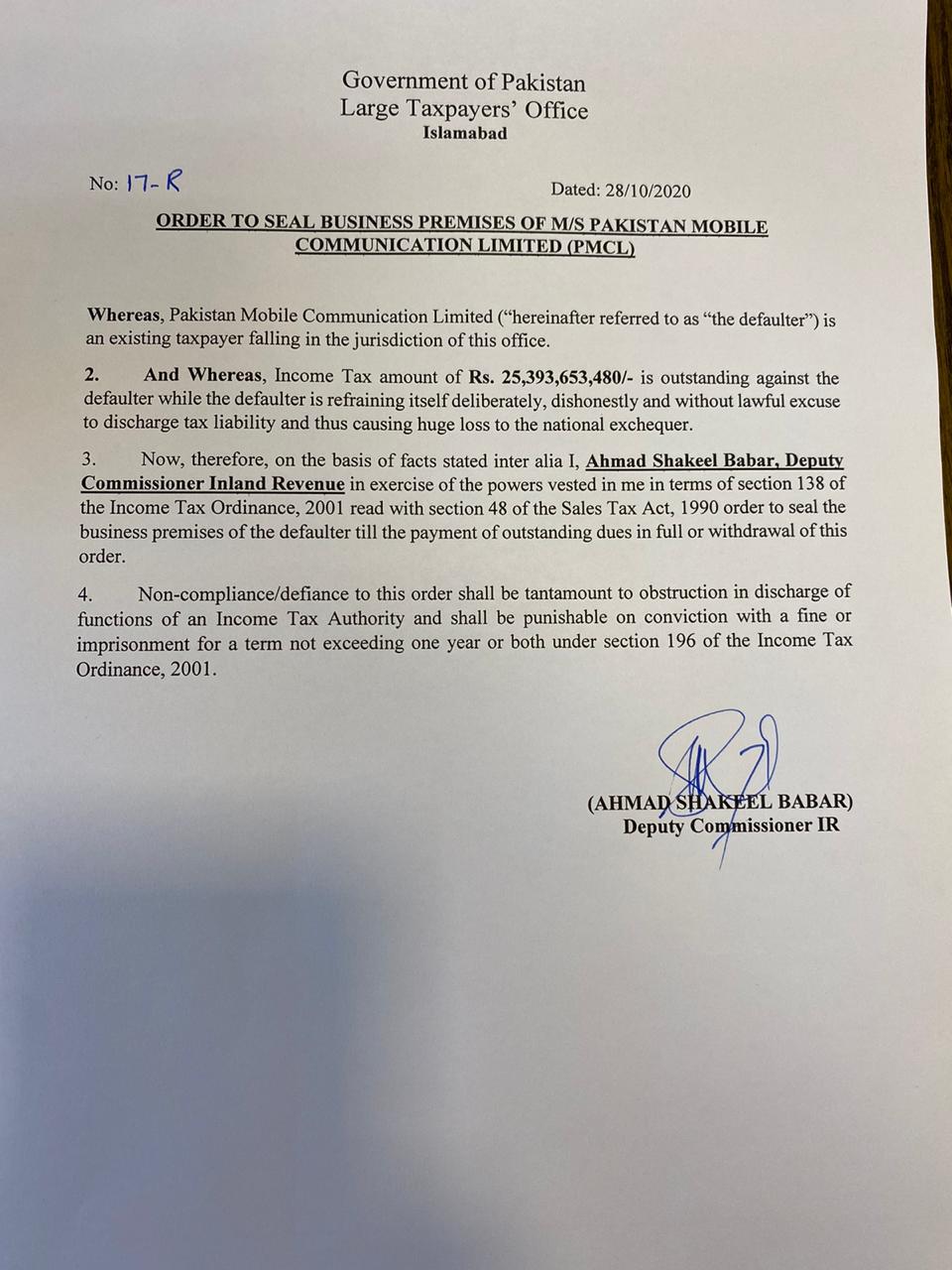 As per documents, the LTU had earlier directed the PMCL CEO to clear the payable amount till Wednesday (today) and also produce necessary evidence to that effect at the FBR’s office. The PMCL was also warned that if the company does not comply in this regard, the tax department “could attach and sale the company’s moveable or immoveable property, and arrest and detain the concerned for a period not exceeding six months” as specified under clauses (a), (ca) and (d) of sub-section (I) of section 48 of the Sales Tax Act, 1990.

Meanwhile, Jazz spokesperson maintained that the company “is a law-abiding and responsible corporate citizen, with significant contribution to Pakistan’s economy over the past 25 years”.

“We have received a notice from FBR this afternoon. Jazz has made tax submissions based on legal interpretations of the tax owed. We will review and take measures under our legal obligations and will collaborate with all concerned institutions for an early resolution of this issue,” he added.