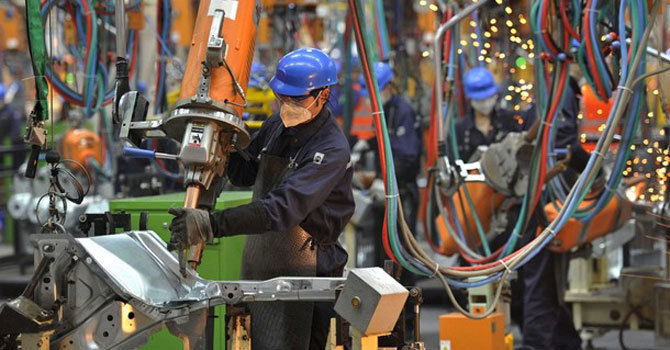 ISLAMABAD: The large-scale manufacturing (LSM) sector grew 6.6 per cent YoY during October 2020, according to data released by the Pakistan Bureau of Statistics on Tuesday.

Meanwhile, on month-on-month basis, industrial growth witnessed an increase of 3.95pc during October 2020 when compared with the indices of September 2020, the PBS data revealed.

On a cumulative basis, large-scale manufacturing during the first four months (July-Oct) of the current fiscal year (FY20-21) recorded a growth of 5.5pc as compared to the same period of last year.

It is pertinent to mention that the provisional QIM is being computed on the basis of the latest production data received from sources, including Oil Companies Advisory Committee (OCAC), Ministry of Industries and Production (MoIP) and Provincial Bureaus of Statistics.

Commenting on the development, Minister for Planning and Development Asad Umar attributed the industrial growth to “acceleration in economic recovery”.

Industrial growth accelerates as economic recovery gathers pace. Large scale manufacturing grew by 5.46% in July to October 2020 vs same period last year. Growth in October was even higher at 6.66% vs October last year.

Similarly, Minister for Industries and Production Hammad Azhar also took to Twitter and said, “Large-scale manufacturing grew by 5.46pc in the July-Oct period. At a time when the global economy is in a deep recession, the industry is driving economic growth and recovery in Pakistan.”

Large Scale Manufacturing grew by 5.46% in Jul-Oct period. At a time when the global economy is in a deep recession, Industry is driving economic growth and recovery in Pakistan.