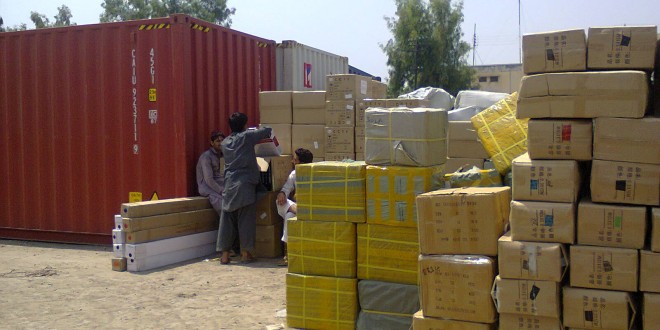 PESHAWAR: The business community has demanded the government to expand Peshawar Dry Port and shift it to another location within the city instead of shifting it to Azakhel, Nowshera.

Tajir Ittehad Peshawar President Mujeebur Rehman, while speaking to Profit on Thursday, said that the business community was already suffering due to inflation and employment, while the move [to shift dry port] would prove to be another serious blow. “Peshawar is already devastated due to high prices of essential commodities, terrorism, extortion, kidnappings and unrest. If the government shifts the dry port to Azakhel, it will affect thousands of drivers, exporters and importers.”

Alleging that the police, customs and other agencies collect bribes between Rs15,000 to Rs30,000 per container for supplying goods from the dry port to Peshawar’s main bazaars, he said that the bribe rate would increase tenfold if the port is shifted from the provincial capital, as goods will reach Peshawar after passing through many police stations and other agencies, resulting in more losses to traders.

He suggested that the dry port be shifted to within the city and expanded with better facilities, adding that members of the provincial assembly, senators and opposition parties in Peshawar would be contacted in this regard. “Still, if the issue is not resolved, we would approach the court in protest,” he said.

Furthermore, Sarhad Chamber of Commerce and Industry (SCCI) Dry Port Standing Committee Chairman Ziaul Haq Sarhadi told Profit that Azakhel dry port does not have any facilities despite the government spending Rs640 million on the project.

He added that traders in KP had been demanding a new dry port since 1986. “In 1997, the then Minister Sardar Mehtab Abbasi allocated 64 acres of land at Azakhel in Nowshera district. The present government sanctioned the land and spent millions but the port does not even have proper offices, a banking system or customs agents.”

He further said that most warehouses and other buildings were decades old and were earlier used for supplying goods to NATO forces in Afghanistan.

Sarhadi further said that the Federal Board of Revenue (FBR) had issued a statement that all matters should be shifted to the new port by December 28, adding that such a move would increase the difficulties of traders unless there are provided with proper facilities.