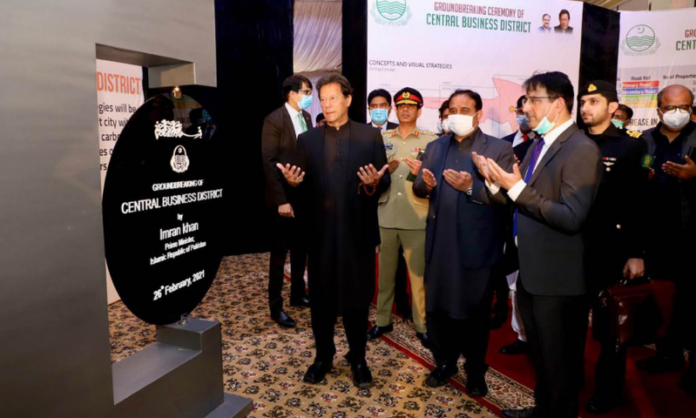 While addressing a ceremony after laying the foundation stone on Friday, the premier said that that the project would generate Rs1,300 billion in the first phase, helping the government pay off foreign loans accumulated over the past one decade.

“It is high time to increase the country’s income and decrease expenditures to come out of the quagmire of fiscal and current account deficit,” he said, adding that the federal government will get Rs250 billion in taxes from the district.

It is pertinent to mention here that the government has urgently recommended shifting the flying club operating at Walton airport as it is within the thickly populated location of central Lahore.

The PM also expressed his concern over the accidents that took place within the last few years wherein training planes fell in residential streets.

The government, a few days ago, had demolished the iconic nurseries next to the airport, while it is feared that the forest spread over about 20 acres may be lost during the development of the business district.

However, according to the PM, by shifting the Walton Airport from the centre of the city and creating a business centre in its place, the government can generate Rs6,000 billion.

Later, Punjab (CM) Chief Minister Usman Buzdar said that the business district would be completed in three phases over an area of 300 acres. “The first phase would be developed over an area of 128 acres, followed by a digital and a residential district in the next phase.”

Meanwhile, the Lahore flying club has already moved the Lahore High Court (LHC) against the government move. The court will take up the case on Tuesday.