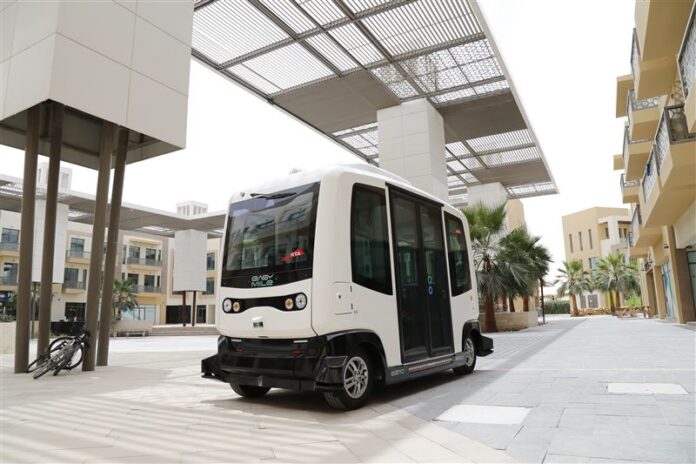 ABU DHABI: The Department of Municipalities and Transport (DMT) will start the trial operations of autonomous vehicles for transporting passengers in Abu Dhabi.

DMT has signed a cooperation agreement with Bayanat, a G42 company, leader in the geospatial domain since 2008. Under this agreement, DMT and Bayanat will cooperate in the trial operations of autonomous vehicles for transporting passengers in Abu Dhabi

The agreement stipulates the establishment of the Autonomous Vehicles Program in coordination with the DMT and in cooperation between ITC and Bayanat, for the launch of the trial operations of self-driving vehicles in two phases.

The first phase includes three vehicles operating in the main area of ​​Yas Island in the pick-up and drop-off points in hotels, restaurants, shopping malls and offices, while the second phase includes more than 10 vehicles in multiple locations across Abu Dhabi.

The service will be free of cost in both phases and will be provided from 8:00 AM to 8:00 PM, with the presence of a safety officer in the driving seat, to facilitate the operation and intervene in the event of any sudden occurrence to ensure the highest security and safety standards.

Bayanat will provide comprehensive support to the program, including vehicle safety testing, central security and operation management platform, as well as overseeing the autonomous vehicle operations for the purpose of complying with traffic laws and its executive regulations in the UAE. This initiative aligns with the company’s vision of becoming the key enabler of a smart transport ecosystem with enhanced connectivity and accessibility of all transport modes.

This includes preparing the necessary regulations and manuals for self-driving vehicles in Abu Dhabi, especially for level 3 and 4 (levels for automating self-driving vehicles), and adopting electronic security standards for smart transport, which guarantee the security of communications and software used in the autonomous vehicle, and any additional necessary measures to ensure the highest levels of safety, security and operational efficiency in this sector.

It is worth mentioning that autonomous vehicles are able to sense the surrounding environment and navigate without human intervention, and rely on mapping algorithms and data obtained from multiple built-in sensors to determine the path of the road. Typical sensors include technical systems similar to radars, and a stereoscopic vision system, Geographic Positioning System (GPS), Optical Object Recognition System, and Real-time Positioning System.

LAHORE: Oraan, which positions itself as Pakistan’s first gender-inclusive fintech startup, has claimed to raise $3 million in the largest seed funding closed by...
Read more
TECH

TAG might have managed to woo investors, but it might have miscalculated its own market
Read more
TECH