Imran says farmers will be trained to increase agricultural production 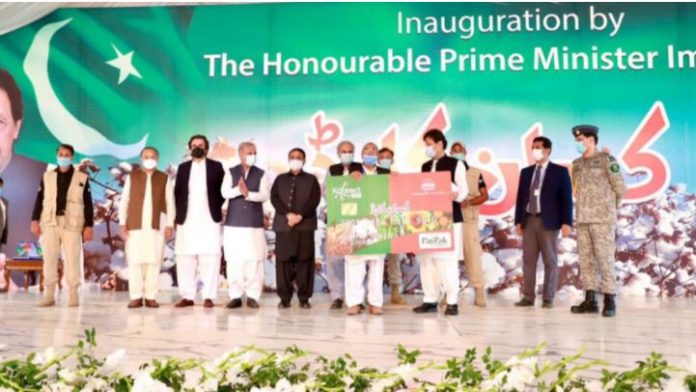 MULTAN: Prime Minister Imran Khan has said that the government’s historic initiative of Kisan Card will transform the agriculture sector in the country, making farmers prosperous.

Addressing the distribution ceremony of the first phase of Kisan Cards to provide agriculture loans for farmers in Multan on Monday, the prime minister said the step would help eradicate poverty of around five million farmers across the country.

“Giving strength to farmers means making the country strong,” he said, adding that the government is firm to bring a positive transformation in the lives of farmers.

The prime minister said that the farmers, through this card, will get subsidised fertilizers, seeds and pesticides, besides low-interest loans and compensation for damaged crops in case of any natural calamity.

He expressed confidence that the Kisan Card scheme will bring about a revolution in the country by making the life of farmers easy through use of technology, enhancing agricultural production and saving foreign exchange. He said that it will also contribute to poverty reduction particularly in rural areas.

Imran Khan said the PTI government has been working on various programmes for agricultural development in the country. He said that a Rs300 billion transformation plan has already been announced for the purpose.

The prime minister said in addition to two major dams, small dams are also being constructed to ensure better water supply for crops. He said the irrigation system is also being improved.

The prime minister said that agriculture has been made part of the China-Pakistan Economic Corridor (CPEC) project for enhancing agricultural production through use of Chinese technology. He said that seed research institutions are being revamped, and efforts are underway for local production of pulses, edible oil and soybean.

The prime minister said that farmers will be trained to increase agricultural production. He said Rs40 billion have been allocated to increase production of milk in the country. For reducing losses of vegetables, fruits and grains; storages and food processing plants will be established.

Imran said the government plans to take steps to considerably enhance production of various agricultural products, including wheat, rice, corn, pulses, fruits, vegetables and fisheries. He said that he himself will supervise the work on the plan aimed at developing the agriculture sector in the country.

Imran said through agriculture reforms, the government had diverted Rs1,100 billion additional money to farmers and mentioned Rs500 support price on wheat in two years. He announced an increase in subsidy on DAP (diammonium phosphate) from Rs500 to Rs1,000 under Kisan Card.

On livestock, he said Rs40 billion have been allocated for projects, including import of semen to improve cattle breed and increase of milk production. With export of cheese and milk, Pakistan can earn up to $25 billion, he added.

He said loss of perishable fruit and vegetables would be overcome by establishing storage houses and food processing plants. He said the government is pursuing the target to double the cereal production including wheat, corn and barley and take steps to cut the imports.

The chief minister said that farmers can also avail low-interest loans easily and their crops would also be insured using this card. He said subsidy is also being provided on agricultural machinery and solar system. He said 30,000 service centres have been established across the province where farmers will be facilitated for getting Kisan Card.

He said under this pilot project, a subsidy of Rs17 billion will be provided to farmers in collaboration with the federal government.

The CM said the provision of direct subsidy to growers is aimed to ensure transparency, adding that eight thousand more land record centres, including 3000 in South Punjab, are being established in the province.