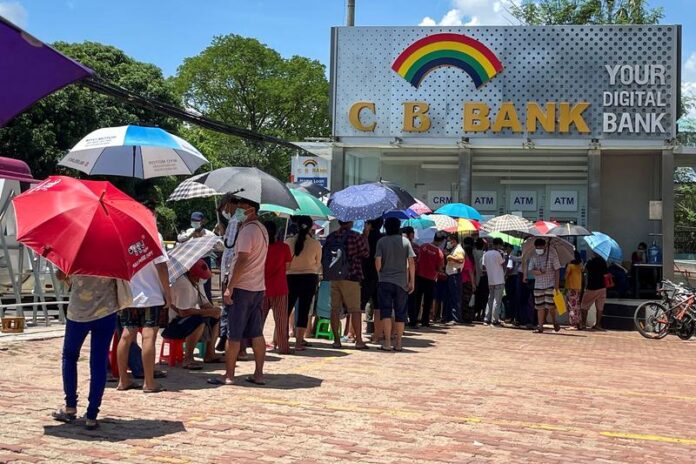 YANGON: If you need cash in Myanmar, you have to get up early. Queues start forming outside banks at 4am, where the first 15 or 30 customers are given a plastic token that will allow them to enter the bank when it opens at 9:30am and withdraw cash, according to more than a dozen people who spoke to Reuters.

If you do not get a token, you either have to queue for hours for the few functioning cash dispensing machines outside or go to black-market brokers who charge big commissions.

The cash crisis is one of the most pressing problems for the people of Myanmar after the Feb 1 military coup. The central bank, now run by a junta appointee, has not returned some of the reserves it holds for private banks, without giving any reason, leaving the banks short of cash.

The banks themselves have been closed or open only intermittently as many staff have gone on strike to protest against the coup. Meanwhile, internet outages make online transactions difficult and international transfers have largely stopped working.

That presents problems for Burmese people and small businesses as they try to navigate an economy rapidly crumbling under the country’s new leaders and the collapse of tourism, one of Myanmars fastest-growing sectors. The Burmese kyat has dropped some 20pc in value since the coup.

Its now very difficult to operate a business, said Hnin Hnin, an entrepreneur in her mid-20s who supplies shampoo and bedsheets to high-end hotels. Traders don’t accept bank transfers now. They want cash. So we need to find the cash.

As a result, Hnin Hnin, who agreed to be identified only by a part of her name to discuss sensitive matters, has been one of the thousands of people queuing daily in front of the few functioning cash machines in major cities. Some people band together in groups of five, she said, so one person can take out money for the whole group.

She has also been forced to figure out ways to pay her suppliers overseas, by making an agreement to swap money with a partner holding cash in an account in Thai­land. Under the agreement, the partner gives Hnin Hnin access to her Thai baht acco­unt, so she can pay suppliers in Thailand, and Hnin Hnin pays her back with physical kyat notes in Myanmar.

The central bank and the junta did not respond to requ­ests for comment. Reuters put questions to Myanmar’s four largest private banks, including Kanbawza Bank and CB Bank. They also declined to respond.

It is now almost impossible to get hold of US dollars or other overseas currency at reg­u­lar exchange centres in Yangon, a dozen people told Reu­ters. Black-market traders will take online transfers in exchange for physical notes in various currencies, they said, but add a commission of up to 10pc.