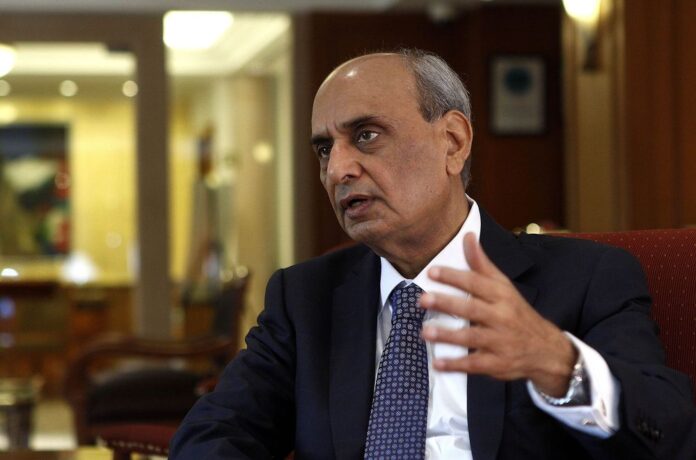 LAHORE: Prominent businessman and chairman of Nishat Group, Mian Muhammad Mansha Saturday asked the government to stop calling everyone a thief, stressing that Pakistan’s problem was not corruption but incompetence and flawed decision-making.

Mansha made these remarks during an interview with a local media outlet while commenting on the ongoing anti-corruption drive of the government against politicians primarily, and businessmen. “There will always be some corruption in every country. The US, European countries are also not free of corruption,” he said.

The Nishat Group chairman expressed that a country should not stop growing because of its accountability drive. “Let’s put this behind and move forward. We have suffered a lot, we have high unemployment and poverty that needs to be addressed,” he said.

“Even the bureaucracy is dreaded. We need to get people out of fear and grow,” he added.

On the recently announced budget, Mansha praised the government, affirming that the budget was going to bring growth to the country. “That is what the budget should be like. I am expecting our growth rate to be at 4 per cent but we can really go up much more and a country like us can grow at 8-10 per cent,” he added.

“There were some problems in the initial years of the government but the growth policy that the government is bringing now is on the right track. Now, we should move together and grow the economy that enables us to sell more, grow more, and bring more revenues for the government,” he said.

“We have done some great things in Covid. When the lockdown happened, in some ways, we reacted really well. The central bank introduced some great policies like loans for salaries that helped the industries that were working,” Mansha said.

On a question of whether growth will be sustainable as it had been superficial because the State Bank was pumping in a lot of money, Mansha replied that central banks all over the world were pumping money by changing interest rates to keep economies afloat during the pandemic.

“There was a high acceleration when the interest rates went up to 13%. That was a mistake but the State Bank of Pakistan (SBP) corrected it. Presently, the interest rate is 7 per cent but I still think there is room to decrease it further by 1 per cent,” added Mansha.

However, the Nishat Group chairman highlighted that a lot was left to be done if long-term growth was to be achieved and the first step towards that would be decreasing public sector losses by privatisation of public entities. Mansha said that Pakistan’s privatisation programmes have earlier been a hit in the entire world, which goes on to show that more can be achieved if Pakistan privatises more entities.

“Our banking sector is a success story and we should speak about success stories. Next door in India, the banks are not doing that well,” he said.

“We have a chronic circular debt issue which can not be fixed because DISCOs simply don’t have good recovery rates. It is only 18 per cent in Quetta, 14 per cent in the frontier and Hyderabad only has 25-30 per cent recovery. Only in Punjab DISCOs are working well but still, the recovery is 90-93 per cent,” he said.

“Power sector needs to be deregulated and privatised,” he said.

Mansha criticised the government for its policy of bringing professionals on different boards, saying that this policy can bring revenues for the government but not a growth of 8-10 per cent.

“We need to bring regulators that would kill monopolies and prevent any excessiveness. We need to improve the situation in the country,” he said.

The case of IPPs

On a question that the power policy under which IPPs were operationalised benefitted investors at the expense of government revenue and power consumers, Mansha acknowledged that though some excessive profits were made, there was no corruption installed in the process.

“These projects were installed during the Musharraf era and there was no corruption. Few companies including ours were requested to come and install power plants because the nation needed it,” he said.

“Those who articulated the power policy in 2002 expected that by now, we would have 40-50,000MW electricity production. If our economy did not grow, why are IPPs to blame?” he questioned.

On the issue of capacity payments, the Nishat Group chairman stated that there was a one-buyer model for the purchase of electricity from power plants, which will always require capacity payments.

Mansha expressed hope that exports in the coming days are going to see a boom but regretted that the Rs26 billion export target, set by the government in the recent budget, was very low for a country like Pakistan.  He, however, said that the exports were increasing because of the government’s initiatives and that they would bring dividends soon.

“If we talk about textiles, presently, our circumstances are conducive to increase exports. Business is shifting from China where wages are increasing and we will benefit from it,” he said.

On the question of whether construction brings growth or does growth bring a boom in construction, Mansha stated that whenever there was momentum in the construction sector, 15-20 affiliated industries like cement, steel, electric wires, and furniture grow in parallel.

“The central bank has done a great job and gave concessions. There is an impetus but a lot needs to be fixed in the construction sector. Foreclosure law for one,” he said.

Mansha lamented that the foreclosure law in Pakistan has never evolved that keeps banks from recovering mortgage properties from customers in case of defaults. This eventually leads to a fall in lending to consumers.

“Problems relating to courts and foreclosures have not been solved in spite of the government’s claims. Who is going to invest like this? If these problems are solved, a poor man is also going to get loans,” Mansha said.

“Banks have not lent more than 50 per cent of their deposits. It should be 80-85 per cent. If foreclosure laws are fixed, banks are going to lend to the construction industry as well as others,” he said.