A cocktail of bad ratings and poor athletic performance is a recipe for disaster, coupled with distribution confusion and a consortium that appears to disregard Kantar-MediaLogic data

With the 2023 Cricket World Cup qualification process underway, advertisers and agencies across the country prepare themselves with campaigns that align directly or indirectly with the tournament at large.

Speaking with Profit under the condition of anonymity, seasoned brand marketers have expressed apprehension about over-investing in the ICC games, citing mixed feelings based on the performance of the Pakistan cricket and Kantar-MediaLogic data pertaining to viewership fluctuations whenever the Pakistan cricket team loses and is no longer a contender.

“Cricket audiences in Pakistan are really interested when Pakistani players are playing in any match or tournament,” said Ahmed Hanif, CEO of Cricwick & Cricingif. “If we compare the numbers of digital viewers in ODI World Cup 2019 and PSL 2020, which were just six months apart, we see a huge difference of interest. In World Cup 2019 we got around 200K unique viewers, while during PSL 2020, around 569K unique visitors came to our platform to watch the live stream and for cricket updates.” 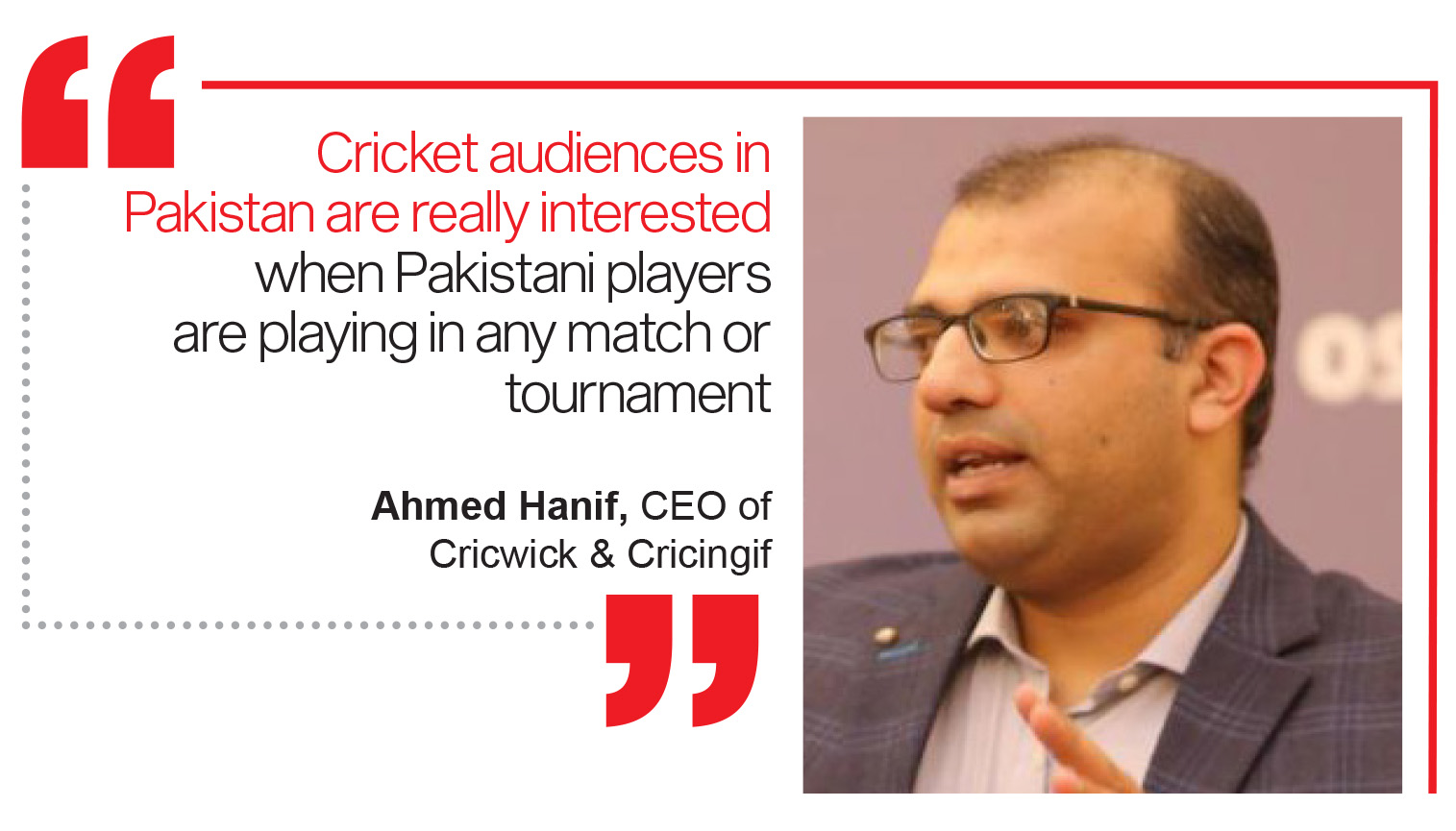 “The culture of local cricket viewership makes an interesting case study as it informs us from where does the fan drive stems,” said Rubab Hasan, the marketing and communications director for The IPG Group. “We believe that the passion to watch cricket—local or international—is demonstrated best when teams represent a community or a city to which the viewer relates his or her identity.”

Even without Ten Sports airing the fourth, fifth, and sixth PSL games, MediaLogic data shows that the cumulative ratings generated by PSL Sports and Geo Super were 8.9 for PSL 4 and 8.6 for PSL 5. Amid the COVID-19 pandemic delaying PSL 6, including the issues created by former Pakistan Cricket Board (PCB) chairman Ehsan Mani, the cumulative rating for PSL 6 was 3.6, the lowest in the recorded history of the league, an outlier.

“Even if we momentarily ignore the Kantar-MediaLogic data which shows that investing sponsorship dollars into the PSL makes much more sense than doing so with the ICC games, what is irrefutably clear is that our national team has a very slim chance of looking good during the qualifiers,” said a brand marketer with a prominent beverages brand. “Under [Ehsan Mani], the Pakistan cricket team lost five of the ten test matches from 2018 to 2019, lost seven of the ten one-day series during the same period. Even with [Ramiz] Raja in charge and nepotism-based team selection abundantly clear, no chance I am risking precious budgets on a losing team.” 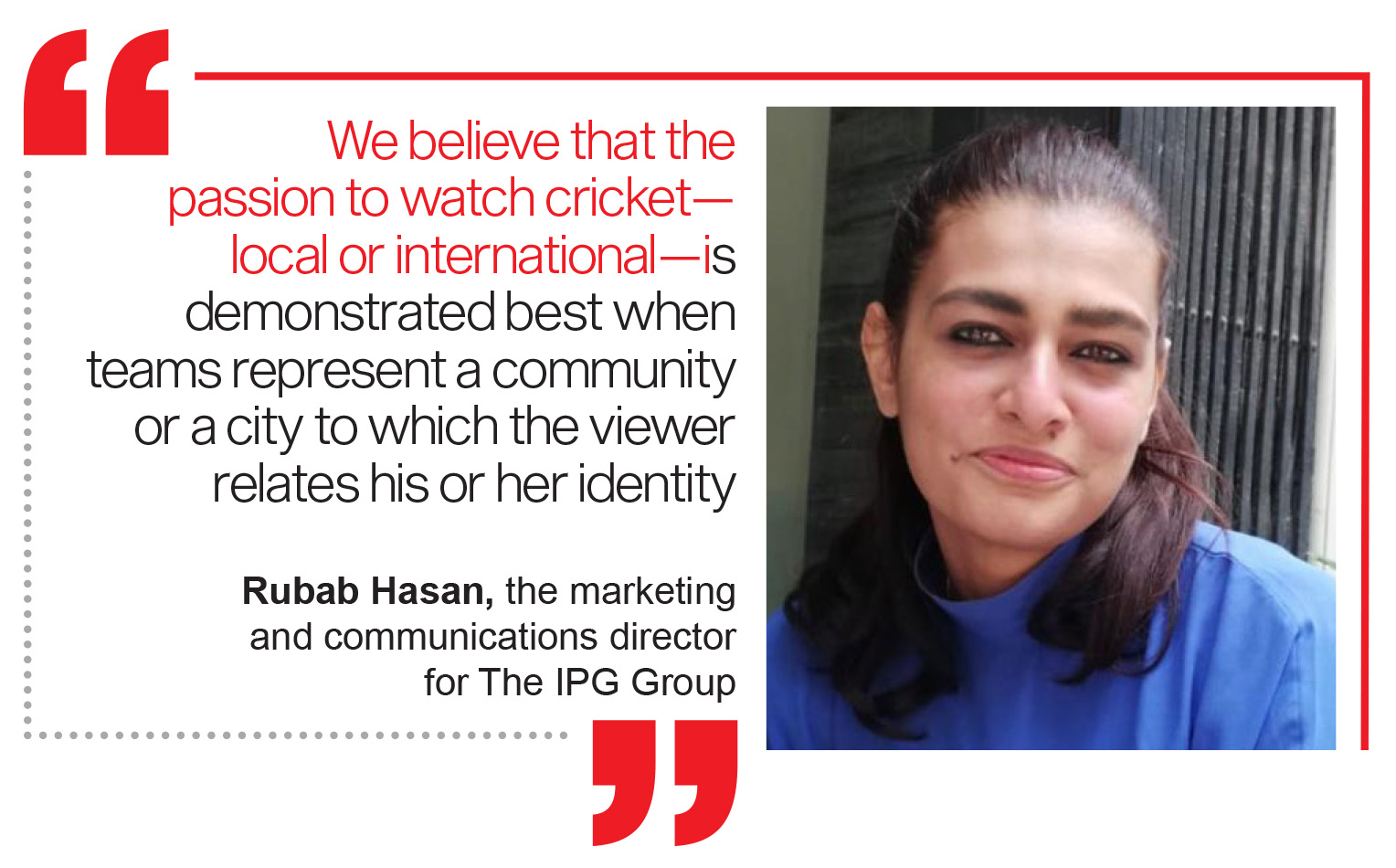 This perhaps matters most to TRP chasing brand marketers, given that Kantar-MediaLogic data also shows that during the 2016 ICC World Twenty20, the cumulative ratings across Ten Sports and PTV Sports between matches where the Pakistan cricket team were playing verses was 13.8 whereas the ratings fell to 3.6 when the Pakistan cricket team are not playing. Of the 35 total matches of the 2016 ICC World Twenty20, Pakistan only played in four of them.

“On evaluating and studying our numbers, it emerged as a revelation that the following in Khyber Pakhtunkhwa topped all other geographical regions in the Pakistani market,” said Hasan. “[Shahid Afridi’s] devoted fans from across the KP—including those from remote mountainous areas—have been supporting and engaging with the [KPL], despite our positioning as essentially an urban property. To us, this is indicative of the growing trends of the community following in cricket.”

All in all, a blend of historical weak ratings for the ICC games coupled with an undeniably poor athletic track record by the Pakistan cricket teams has data-driven brand marketers worried about sinking their budgets in a ship that refuses to float.

What is data, if not faith eroding?

The data from Kantar-MediaLogic has not halted the bid for the media rights of the upcoming ICC games, however, with PTV floating an expression of interest (EOI) seeking a commercial media partner. 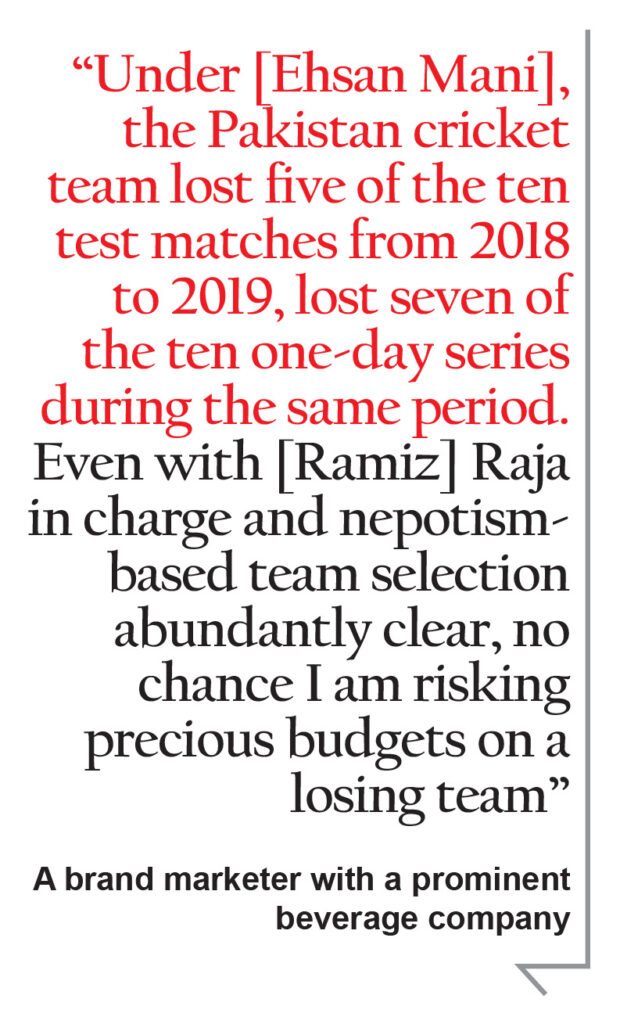 With a 9th September deadline set by Star Middle East, which was co-awarded the audio-visual rights for the ICC events for the period between 2015 and 2023, PTV chose both ARY and GroupM as its commercial partner, with Ten Sports promised by the consortium as the satellite sports channel that will air the matches while PTV Sports is the terrestrial broadcaster for the games.

In response to the news that ARY had chosen to partner with GroupM, several media agency leaders considered severing their ties with ARY based on concerns that the Pakistani pay television network would help GroupM steal its clients with undercutting rates. Amid industry pressure, this did not come to pass. The deal with PTV no doubt strengthens GroupM’s chances of winning the $20 million Nestle media review, amid the replacement of a senior executive.

The state-owned broadcaster approved the bid by the ARY and GroupM consortium, which guaranteed up to Rs. 1.1 billion to the PTV Network outside PTV Sports, up to Rs. 1.8 billion to PTV Sports, and up to Rs. 300 million for an infrastructural upgrade. Given that the EOI was focused on finding a commercial media partner around the ICC and PTV Sports, the offer to guarantee revenue for channels outside of sports is outside the scope of the EOI.

The total value of the deal is worth Rs. 3.2 billion ($19 million) for PTV, which comes with a variety of caveats that no executive employed at the state-owned broadcaster appeared to have questioned.

With the understanding that profit means revenue minus cost of acquisition, the ARY and GroupM consortium proposed to share costs with PTV on a 60:40 basis while the profit share would be a 40:60 basis. There was no additional clarification sought by the PTV to determine how it would safeguard itself from low profit created by exaggerated costs which benefit the consortium.

According to PEMRA, currently, ARY does not have a license for a sports channel, nor can it convert its existing channels to that of sports given that the deal structure struck with PTV dictates that Ten Sports will be the satellite sports channel that will exclusively air the matches. 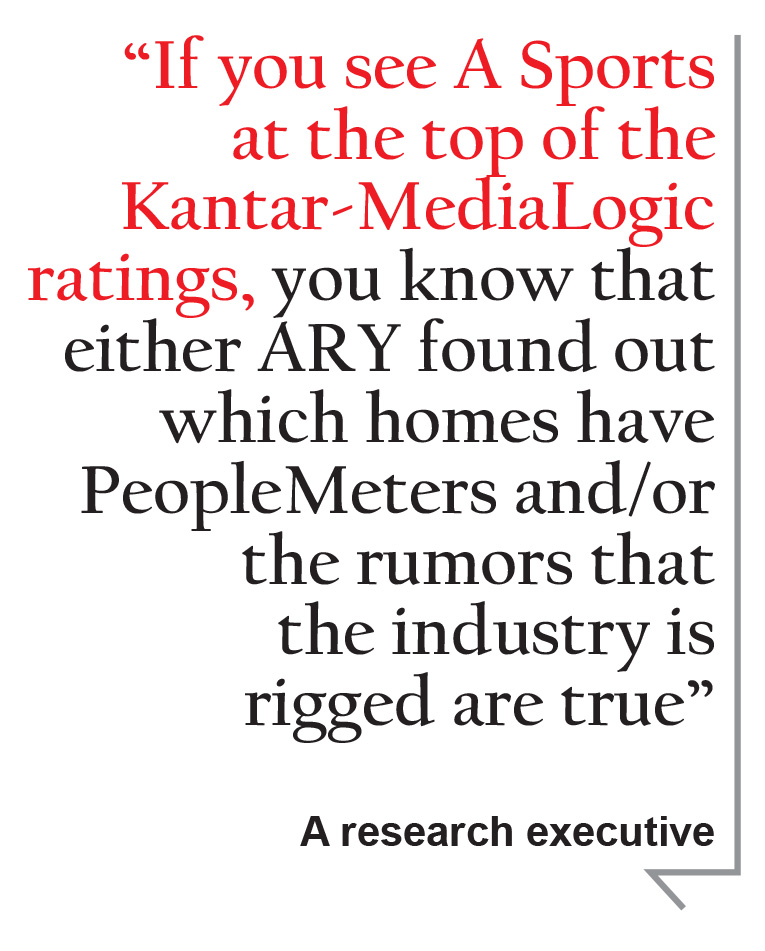 However, this deal may be sidelined at the last minute given that Ten Sports, whose landing rights are owned by Indian-backed Tower Sports under Sony Corporation, does not have a license in Pakistan and is pending clearance due to security concerns. It is unclear why the ARY and GroupM consortium failed to inform the PTV about the Ten Sports license expiring.

As seen from the Kantar-MediaLogic data cited above, from the first to the third season of the PSL, Geo Super produced better ratings than Ten Sports, which makes the suggestion of the ARY and GroupM consortium for Ten Sports – coupled with its lack of a license nor security clearance – all the more perplexing. That the director of sports and syndication for PTV, Dr. Nauman Riaz, was unaware that Ten Sports does not have a license nor questioned the consortium for suggesting it, is also baffling. It’s almost as if the “ok, boomer” meme has merit.

One man’s ignorance is another man’s profit

Perhaps to mitigate the reputational damage and hoard potential revenues for itself, ARY is testing out its own sports channel – after first announcing one in 2016 – called A Sports, as found on AsiaSat 7 and has redirected formidable resources towards its ARY Sports website and app.

It has also invested heavily in a mixed martial arts tournament called ARY Warriors, with its own channels – ARY Digital, ARY News, and ARY Zindagi – as media partners. The company also appears to be pushing a narrative around the Pakistan Football Federation partnering with Global Soccer Ventures (GSV) to kick off a franchise league called the Pakistan Football League (PFL). 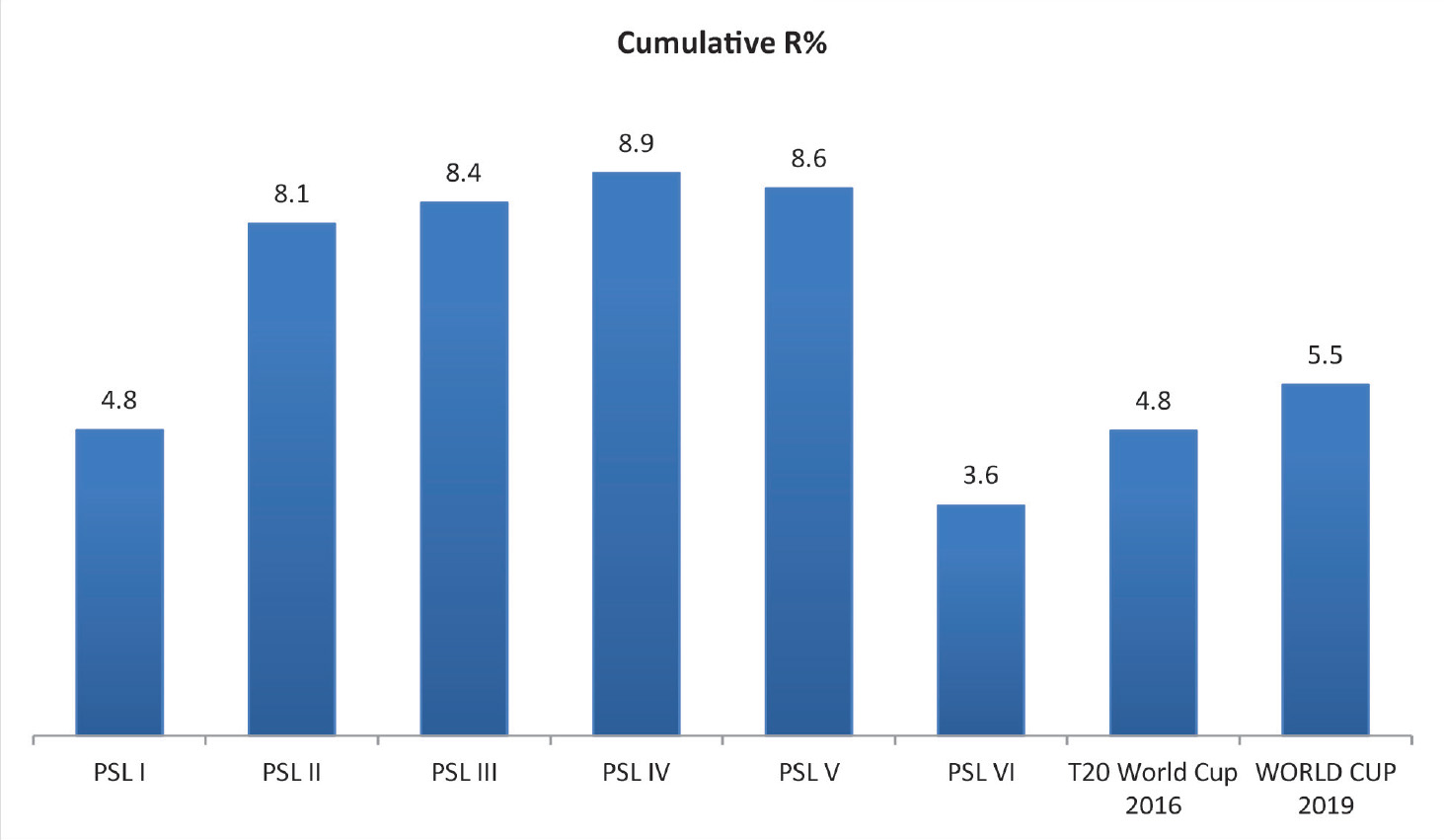 “Even if ARY can convince its establishment friends to move along permissions and approvals for the launch of A Sports, it will have to prove its worth in the meritocracy of Kantar-MediaLogic ratings, which cannot be manipulated regardless of what some media groups think can happen from knowing the location of PTCL boxes and testing zones,” said a research executive. “If you see A Sports at the top of the Kantar-MediaLogic ratings, you know that either ARY found out which homes have PeopleMeters and/or the rumors that the industry is rigged are true.”

With the EOI floated by the PTV stipulating that the media partner has a digital live streaming platform with considerable reach, ARY may hope to push the YouTube channel for ARY Sports for consideration, which boasts nearly 260 thousand subscribers, of which an average of 0.003% are actually watching the videos based on data provided by HypeAuditor.

“The paltry ratings of the ARY Sports app, its inexcusably poor value proposition, the clearly planted positive reviews, and the clear lack of live streaming means that there is no way that the ICC would ever allow either the ARY Sports app nor the ARY Sports YouTube channel to be a live stream partner for the ICC games,” said a media executive. “The best choice is by far bSports.pk which has been a digital streaming partner for the PSL across its own app, a YouTube channel, and Facebook live.”

It is this strange combination of confusion between hard data and a qualitative cloud of secrecy around which satellite sports channel will eventually stream the games – including the legal repercussions of breaking pre-set arrangements – that that is holding seasoned brand marketers back from making a decision that they may soon regret.

Some banks are just government lending arms, especially now that the government can’t borrow from the central bank
Read more