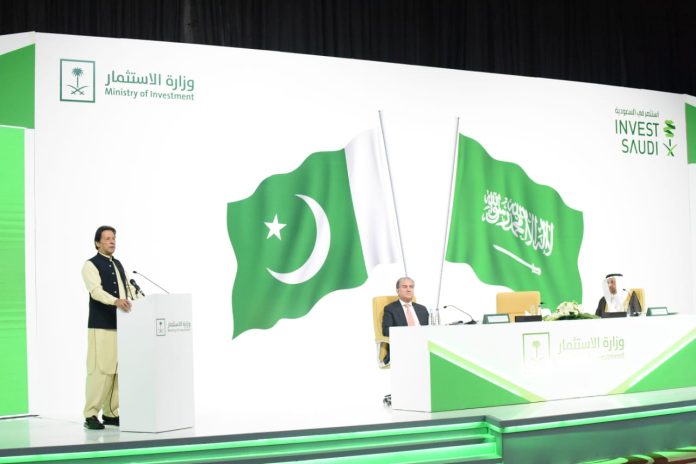 RIYADH: Prime Minister Imran Khan on Monday urged Saudi companies and entrepreneurs to benefit from Pakistan’s strategic location as well huge investment potential in diverse areas of the economy, including housing and construction for mutual benefit.

He particularly mentioned the mega development projects of Ravi City and Central Business District (CBD) in Lahore, stressing that it was the right time for Saudi investors to benefit from these projects.

The prime minister was addressing the Saudi-Pak Investment Forum organised in cooperation with the Saudi Ministry of Investment. The forum was attended by senior representatives of leading Saudi companies and entrepreneurs along with Pakistani businessmen. Besides, Saudi Investment Minister Khalid Al-Falih, the forum was also addressed by Foreign Minister Shah Mahmood Qureshi, Advisor on Finance Shaukat Tarin and Energy Minister Hammad Azhar.

Similarly, the prime minister said that with 300,000 acres of virgin land – next to River Indus, allocated for investment, Saudi companies can invest in agriculture and food security sectors.

Prime Minister Imran Khan while highlighting the close and historic ties between the two brotherly nations, saying that Pakistan-Saudi relations transcend all other relations due to their people-to-people contacts.
“Whichever government comes to power in Pakistan, it does not affect Pakistan-Saudi relations,” he added.
PM Khan said that Pakistan was the fastest growing economy in Asia until the 1960s, with strong institutions like PIA, one of the best airlines in the world at that time. “Then we lost that path through the policy of nationalisation”.
He said that now, the present government was exploring the potential by incentivising various sectors in a country of 220 million people, out of which a majority of people were below the age of 30.
He said that Pakistan, due to its strategic location with two of the biggest markets in the neighbourhood, as well as connectivity with Central Asia through Afghanistan provided a rare opportunity to investors for reaping maximum benefits.
The prime minister said that if relations with India are improved, although it was possible only through the resolution of Jammu and Kashmir dispute in line with UN resolutions and giving the Kashmirs right of self-determination, Pakistan will have access to three big markets.
“If you look at the strategic location of Pakistan, which is open for investment, it can benefit both Saudi Arabia and Pakistan,” he reiterated.
On the occasion, Foreign Minister Shah Mahmood Qureshi focused on Pakistan’s shift from geo-politics to geo-economics, Adviser on Finance Shaukat Tarin highlighted economic resurgence of Pakistan, and Energy Minister Hammad Azhar outlined the opportunities in the energy, agriculture, livestock and other key sectors.
In his keynote address, Khalid Al-Falih underscored the longstanding and abiding ties between Saudi Arabia and Pakistan and reaffirmed the resolve to further deepen bilateral trade, investment and business links.
- Advertisement -
Facebook
Twitter
Linkedin
WhatsApp
Email
Previous articleNA speaker vows to urge govt to extend construction package
Next articlePakistan’s IT exports increase, touch $635m mark in Q1FY22