Supply to Punjab increased from 64pc to 72pc, Bakhtyar says 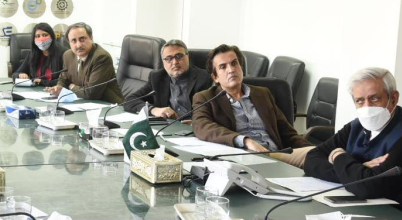 ISLAMABAD: Urea prices have been restored to controlled rates of Rs1,768 per bag by taking punitive measures in Punjab while the pricing structure is being maintained in other provinces.

This was highlighted in the Fertiliser Review Committee meeting held to review the supply, stock position and production targets of urea in current month for sowing season.

Representatives of fertiliser manufacturers, provincial departments and senior officials of the Petroleum Division were present in the meeting.

Speaking on the occasion, Bakhtyar shared that urea supply to Punjab had increased from 64 per cent to 72pc, rectifying the anomalies of distribution amongst provinces.

He said that the demand of urea would be met through domestic production which has totalled 3.4 million metric tonnes (MMT) this year as compared to previous years.

He said that the government has ensured uninterrupted gas supply to fertiliser plants for boosting domestic production during Rabi season.

While being briefed on the urea supply situation, the minister directed relevant authorities to carry vigilant border monitoring to avoid inter-provincial movement of supplies and rationalisation of district wise provision for market correction.

The meeting concluded with guidelines for provincial departments and fertiliser manufacturers to identify the factors involved in black marketing and over-supply of urea to avoid any market stress amidst Rabi season.