What it means to build a team

'Team Building' is a term that is thrown around a lot. But what does it actually take? 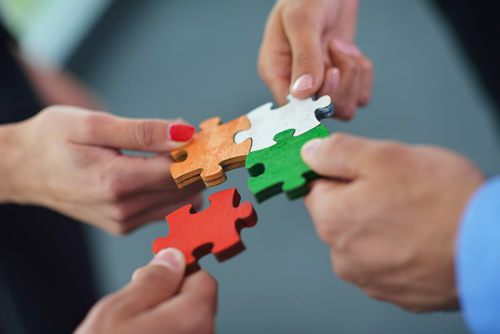 “No matter how brilliant your mind or strategy, if you’re playing a solo game, you’ll always lose out to a team.” – Reid Hoffman

Team building is one of the most fundamental components of creating a successful organisation. An organisation cannot hope to achieve success without having the right people that can work and learn in harmony. Companies that have risen to the top are well-known for having strong teams that not only perform effectively to deliver successful outcomes, but also have profound relationships between their members.

One idea behind successful team building is to look at two different angles to come up with teams that are capable of driving the organisation forward towards achieving their goals and objectives. The first perspective is to hire the right people for your organisation and ensure that the role and capabilities of an individual are aligned. From this perspective, it is important that there is a clear understanding of the criteria of how talent is acquired and that the company has a high success rate of hiring the right people for a particular job. The other perspective is to ensure that whenever a project needs to be executed by a team, the right mix of people are chosen to maximise the success level of the project.

It is no secret that organisations recognize the value of team building and invest heavily to ensure their capability in creating strong teams because of the positive impact it has on the organisation. Team building leads to a positive work environment where people are able to trust one another and communicate effectively. When people are able to rely on one another and talk openly about the task at hand or about their concerns, a sense of unity is developed amongst the team members which increases the potential of what the group is ultimately able to achieve.

A successfully built team also fosters creativity and learning. People are more inclined to voice their ideas when they know that others value their perspective. In such a scenario, all the individuals in a team are eager to listen to one another, leading to the generation of innovative ideas to tackle problems and allows individuals to learn from the approach of their team members to address their weak areas which ultimately helps them in becoming more well rounded professionals.

Team building is a crucial component of creating strong relationships between individuals and allows them to develop a better understanding of their team members. This ensures that people are not only able to resolve any conflicts between them which may arise during the project, but also are in a better position to recognize when their team members are facing difficulties and provide them with the necessary support to overcome those issues.

This is why building a team is arguably the most crucial element in determining the potential of the team, because regardless of the individual skill level and expertise that the team may have, if a team is unable to create an environment where individuals are able to comfortably work together and trust one another, they are unlikely to succeed in their goals which ultimately affects the organisation’s capability to move forward. Organisations also realise this and they want to ensure that their team building is top notch to maximise the potential of their workforce and create a cohesive unit of employees.

Team building can be done in a wide variety of ways. When we look at renowned corporations of the Silicon Valley like Facebook, Salesforce, and Uber, they ensure that their team building strategy provides a unique experience for their employees. They have invested so much in creating unique team building activities that are not only effective from the standpoint of building chemistry between employees, but they also provide the employees with an entertaining experience which aligns perfectly with the culture of the company and the  expectations of the employees. This includes activities such as playing espionage themed adventure games, arranging massive music video competitions where teams battle head to head with one another and also includes going to an island in San Francisco to take part in adventurous challenges in which team members have to work together to win a particular prize.

This type of approach has successfully been implemented in various Silicon Valley companies which undoubtedly has become a huge recruitment tool and leads to people all over the world eagerly coming there to enhance their careers. However, successful team building is not limited to big companies or to companies in Silicon Valley. Team building involves a very careful understanding of the culture of the organisation, in conjunction with successfully identifying and creating the desired relationship dynamics between individuals in a team whilst ensuring that members of the team are able to complement one another to create a successful collaborative effort which overcomes any weaknesses that individuals may have.

This principle is true regardless of the size of your organisation or the location of your company and it is essential that organisations overcome the various roadblocks that adversely impact the process of team building. Particularly, if we look at Pakistan, barring a few, organisations are not able to experience a high rate of success with their team building because of certain limitations emanating from the way most Pakistani organisations operate.

In Pakistan, the biggest hurdle to team building is that in a substantial number of cases, there is a lack of meritocracy in the way people are assigned roles in a team and the lack of trust individuals have in each other due to biases that people fall rather easily into. Quite often we see that under qualified people are given substantially powerful roles in teams which is likely to cause other members to feel disgruntled and they are unmotivated to work in unison because they feel that they are unable to rely on those people.

Moreover, we often see that in Pakistan, people are unfairly evaluated based on criterias that are not relevant to the task at hand. It is often a hidden truth that people are not allowed to blossom in teams due to factors such as their background or their personality,and things like these unfortunately play a part in the autonomy provided to certain individuals in a team which can easily lead to factions within the team which makes it difficult for the group to function properly.  People are also hesitant to share their ideas when they know their perspective is not valued and this ultimately causes the team to suffer from a lack of creativity in how they deal with emerging challenges in a project and this also puts a ceiling on what a team is capable of achieving.

Teams also suffer from a lack of clarity regarding their objectives and the management is unable to align everyone towards a common goal. In this scenario, individuals make their own assumptions about the project and these differences lead to people swaying in different directions which ultimately makes it difficult for the team to row in one single direction.

In light of these realities, organisations in Pakistan need to substantially improve their capacities to build powerful teams and create a culture that empowers teams rather than individuals. Undoubtedly, this will not only lead to a better working environment for all parties, but also will cause the organisation to sustain success for a longer period of time. It is also crucial that organisations have a strong policy of succession. This allows for the development of future leaders within the organisations and ensures that the organisation does not have to rely on external sources for acquiring talent. It is also key to remember that even more than skills, the focus should be on the attitude and aptitude of employees whilst building teams.

This is because organisations can always arrange training to help employees acquire the necessary skills for the job, but they cannot do much to teach the right kind of attitude to work in a team environment. The importance of team building is reflected by the reality that individual brilliance has a limited upside in terms of success, whereas team brilliance has unlimited potential of the type of success that is possible. Henry Ford sums up the significance of successful team building quite wonderfully when he says “If everyone is moving forward together, then success takes care of itself.”

S.M. Talib Rizvi
The writer is a senior professional banker with varied experience spanning over 25 years. He presently serves as the executive director for TAG.