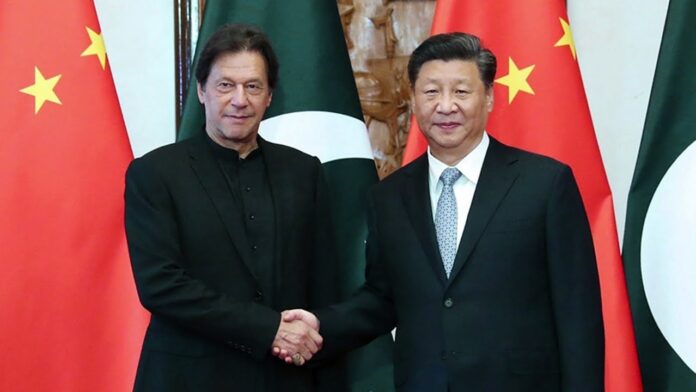 A new era of development and cooperation has begun between Pakistan and China, said a joint statement issued at the end of PM Imran Khan’s visit to Beijing.

President Xi Jinping and Prime Minister Li Keqiang had detailed delegation-level in-depth discussions with Prime Minister Imran Khan on the sidelines of the opening ceremony of the Winter Olympic Games 2022.

Both sides have issued an important thirty-three pointer joint statement covering diverse dimensions of relation between the countries.

During the meetings, both sides agreed to maintain high-level exchanges and strengthen institutional linkages at all levels.

Prime Minister Imran Khan’s participation in the winter olympic games is a mark of strength in brotherhood and solidarity with China.

China and Pakistan are strong supporters of fairness and justice in the international political system, this renewed cooperation outlines contours on how to move jointly for building global and regional peace.

China is at the cornerstone of Pakistan’s foreign policy. Pakistan has always extended unwavering support to the One-China policy on Taiwan, Hong Kong, Xinjian, Tibet and the South China Sea.

While on the other hand, the Chinese side has similar support to Pakistan’s sovereignty, independence and security, along with extending support to its socio-economic development and prosperity.

To foster forward strategic cooperation, three dialogues have been held at the level of the Foreign Ministers of both sides. Pakistan and China also have robust defence cooperation and China recognizes Pakistan’s fight against terrorism.

On security cooperation, both states agree on building cooperation in strengthening effective security mechanisms for CPEC personnel and projects.

In the past, CPEC has faced negative propaganda and security threats. There is now a joint resolve to mitigate these threats, and this needs to expand the effective use of new emerging digital technologies.

Since 2015, CPEC has contributed immensely to Pakistan’s overall economic health. Moreover, it promoted Pakistan’s image in the world as an investment-friendly country.

A given statement has covered the ongoing cooperation comprehensively between both countries on CPEC. Especially the impact that CPEC has created ripples in the geo-economics and geostrategic levels through increasing investments, cooperation, promoting trade and connectivity.

CPEC has transformed Pakistan’s trade ecosystems, creating opportunities for Pakistan to build its industrial base.

Trade between Pakistan and China has increased, including capitalizing on the second phase of the Pakistan-China Free Trade Agreement. This agreement was signed when Prime Minister Khan visited China in 2019.

This agreement aims to build up to $17-20 billion bilateral trade. Another step is cooperating on building e-commerce platforms and building logistics, warehouses and custom facilitation. Gwadar has a particular focus on overall CPEC cooperation.

CPEC Joint action committee has been tasked to enhance comprehensive cooperation, especially on trade, infrastructure, industrial development, agriculture transformation, scientific and technological cooperation and socio-economic well being of the people.

This people-centric approach has remained the cornerstone of China’s reform and opening-up period that has resulted in the uplifting of 770 million people out of poverty.

Apart from various other cooperation fields, both sides extended support to each other during the early pandemic times.

It was a strong reflection of the time-tested friendship wherein China has provided Pakistan with the vaccine and other health care equipment to support in its massive national level vaccination campaign. Such high levels of cooperation between both sides manifests strong resolve to stand shoulder to shoulder with each other to build a common prosperity for mankind.