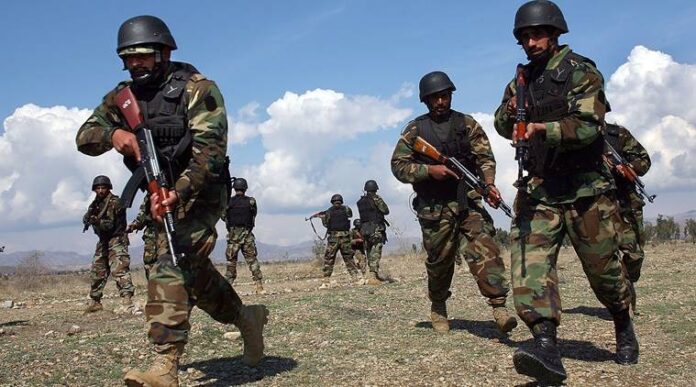 Pakistan’s second war on terror is becoming more violent and more complex over the last few months. With security personnel facing attacks on an almost daily basis, the situation in the peripheral regions near the Afghan and Iranian borders has become tenuous. As last week’s suicide bombing in Karachi by a female bomber shows, terror groups are once again capable of carrying out attacks in urban centers. While a protracted game of thrones plays out in Islamabad and its adjoining areas, not enough attention is being paid to this ongoing war that is going to be much more challenging to win for the Islamic Republic of Pakistan.

There are three key reasons for why the second war on terror is much more complex than the first: growing capabilities of both the radical Islamist and Baloch terror groups, a worsening political economy, and the withdrawal of U.S. troops in Afghanistan.

Reports have consistently flagged that radical Islamist groups, in particular the Tehreek-e-Taliban Pakistan (TTP) and the Islamic State (ISIS-K), have significantly rebuilt their capabilities in the last few months. This is evident in the growing tempo of terror attacks targeting Pakistani security forces and law enforcement personnel. The worsening situation in Afghanistan means that these groups have safe havens from where they can plan and execute sophisticated attacks targeting people within and outside Afghanistan. An example is an alleged ISIS-K rocket attack on Uzbekistan, where 10 rockets were claimed to have been fired by the group. While Uzbek authorities said that this was untrue, ISIS-K’s growing capacity in northern Afghanistan has started to concern both the Taliban and other regional powers. Pakistan has faced the brunt of this growing violence at the hands of the TTP and has upped the ante by carrying out airstrikes in Khost and Kunar which targeted TTP safe havens.

Complicating this challenge is the growing capability of Baloch terror groups, which have also started to increase the tempo of their attacks. An example are the deadly army post attacks in Balochistan in early February, following which the security forces claimed that they had killed 20 militants in Panjgur and Noshki. These groups have allegedly found safe havens across the border in Iran, with the interior ministry confirming that “anti-Pakistan terror outfits are regrouping in Balochistan via Sistan.” The suicide bombing in Karachi shows that their capabilities are only growing, meaning that Pakistan now must deal with growing violence in both Khyber-Pakhtunkhwa and Balochistan.

To deal with this growing violence, the country needs institutional and political consensus. This consensus was last forged following the horrific APS tragedy. Following the ouster of Imran Khan, political temperatures are unlikely to come down, especially with elections around the corner. This is further complicated by the fact that the military establishment is facing its own set of challenges due to the political crisis. Finally, the army chief is on his way out, meaning that his own capabilities to corral political leadership together are severely constrained.

Winning against insurgencies is economically costly as well. Paying for the increased tempo of military operations, aerial strikes, and investment in new gear and technology all requires hard cash, especially foreign currency. Money is also needed to win hearts and minds, both by doling out cash and investing in developmental projects. Pakistan currently is confronting an economic crisis and is trying to negotiate the resumption of the IMF program, meaning that the state’s capacity to fund major military operations and development is extremely limited. Controlling the ballooning current account deficit is a priority, with reserves standing at less than two months of import cover. This financial crunch may further worsen due to higher commodity prices in the international market. All of which means that there is unlikely to be any spare cash available to fund things that can win hearts and minds while defeating militants.

During the first war on terror, Pakistan had some level of inflows and support coming from the U.S., whose military forces were stationed across the border in Afghanistan. Given that the Washington had long encouraged Islamabad and Rawalpindi to deal with terror groups on its soil, Pakistan was able to get some level of financial and military assistance from Uncle Sam to pay for these operations. It could also count on U.S. forces to mop up terrorists escaping into Afghanistan. The U.S. is now solely occupied with the Ukraine and the Biden administration has no major interest in coming to Pakistan’s rescue. This lack of interest from Washington means that unlike the first war on terror, when Pakistan could count on the U.S., it must now fight this war on its own, without major military and financial support.

Terror groups targeting Pakistan recognize the constraints faced by their enemy, which is why they are becoming increasingly brazen and aggressive with their attacks. Given the current environment in Pakistan – you will find hardly a primetime show dedicated to the second war on terror – it is unlikely that the country will step up its game any time soon. There will be more condemnation over attacks, some more visits to the frontlines, and press releases about martyrs. But beyond that, Pakistan seems neither capable nor serious about winning its second war on terror.