Imports will be controlled for next three months: Miftah

Finance minister says rupee will be under pressure if CAD widens 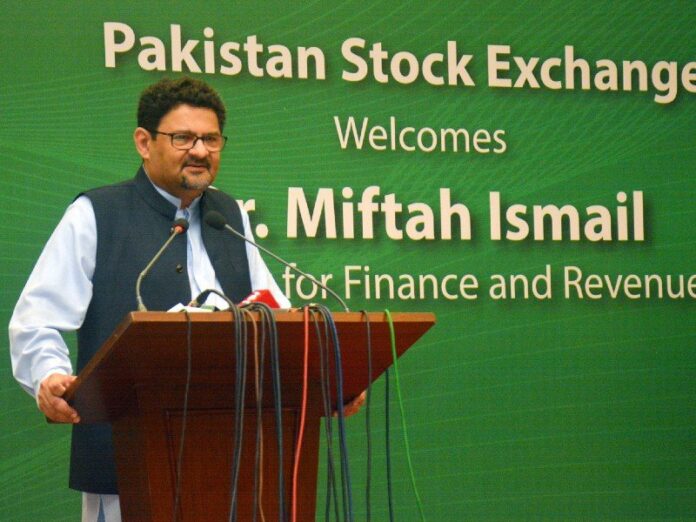 ISLAMABAD: Finance Minister Miftah Ismail on Friday said that the government will be controlling imports for the next three months even if it comes at the cost of slower growth.

While addressing a ceremony at the Pakistan Stock Exchange (PSX), Miftah said that the government will also come up with a policy in this regard.

“I understand that growth will be reduced for a bit but I have no other choice,” he added.

Miftah said that  the government’s import restrictions would affect the automobile and electronic appliances industries. He said he did not want to create unemployment and his first priority was the reduction of imports.

“When there was pressure, we imported a lot of oil and gas. At this time, we have a stock of thirty days for diesel and petrol. We have furnace oil supply for six months. We are very comfortable in terms of our energy security and energy supply, and other obligations. We will control imports for the next four months.

The minister pointed out that the country’s import bill in June was $7.7 billion and if the current account deficit widened to such an extent, it would create pressure on the rupee.

Pakistan’s import bill for the previous fiscal year stood at $80bn while its exports amounted to $31bn. “No country can grow and be stable with this kind of current account deficit.”

He said that while it was a good thing for developing countries to run a small deficit, Pakistan had failed to productively use its long periods of deficit.

The PML-N government, during its previous tenure, had set up power plants generating 11,500MW of energy but doubling electricity generation had not led to a doubling in the industrial and export sectors, he added.

“Other countries like China set up factories after setting up power plants. We only built wedding halls and we did not [earn] foreign exchange.”

The minister said that while he believed in the model of export expansion and not import substitution, the government needed to control the budget deficit for which immediate steps needed to be taken.

He added that while the economic situation of Bangladesh, Vietnam and Pakistan was similar in the nineties, now their exports were $100bn and Pakistan had to “ask for money at every place”.

“It’s no fun. I think it’s time that we act like a mature, dignified nation. The new tax-to-GDP ratio is 9.2 percent. You cannot run a country on this. You need more money.”

Ismail said the country had been close to default when the PML-N-led government came into power which is why he approached the International Monetary Fund (IMF) days after becoming the finance minister.

“We did not have any other option,” he insisted. The country had $10bn in reserves back then while it had to pay back $21bn in the next year. “This is not even debt servicing, just debt repayment.

“So the IMF had to come, it will come. Then the World Bank will come; then ADB (Asian Development Bank); then a Chinese bank, Asian Infrastructure Bank, has also said that it will give money if the World Bank does. Even friendly countries were politely encouraging us to get money from the IMF because no one wants to back a sinking venture.”

The government had to take some “very difficult decisions” as a result, Ismail said. “We raised petrol prices and inflation increased but if the dollar payments are greater than income, how far can we intervene? There are IMF restrictions against intervention. The first thing is to remain solvent and save ourselves from default.”

Finance minister said that dollar outflows had been surpassing inflows, which is why the rupee had fallen sharply against the greenback over the last month.

“Even a small shopkeeper knows that if your sale is Rs30,000 a day and you buy stock worth Rs80,000, then you need to reduce the stock you buy. We did the same. We reduced imports to $4.9 billion from $7bn and all problems ended.”

The minister said it was important to qualify what kind of growth the country wanted — a boom and bust cycle or a sustainable one. “It turns out if our growth is inclusive, it will be sustainable too. If we make the lower [class] people slightly richer, then local consumption will slightly increase because they have local products in their consumption basket.”

The government had prioritised two sectors — agriculture and export — and while incentives had already been offered for the former, a good incentive-based policy would be introduced for exporters soon, Ismail said.

“We do not want growth without exports. Growth is only favourable when it is export-oriented.”

In response to a question about whether the rupee was undervalued, he said no one knew the correct figure. He added, however, that the government was taking the forex market to the point where dollar inflows would surpass outflows and the exchange rate would be stable.