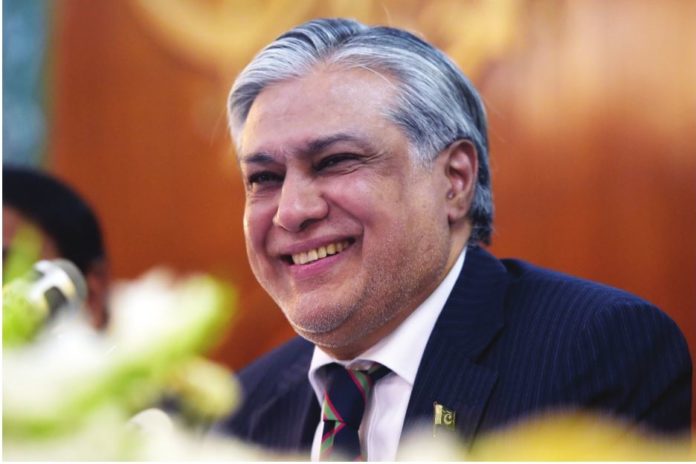 For the past 20 years every finance minister that Pakistan has had (with the exception of Hafeez Shaikh) has pushed the economy towards a catastrophe by pumping growth using artificial means such as depressed interest rates and fixed exchange rates. In every case they all refused to acknowledge that the means they were using to pump growth were unsustainable, and steadfastly refused to correct course, leaving it to the next government to take the painful steps required to arrest the growth momentum, deflate the deficits (fiscal and external) that their policies had given rise to, and preside over a painful adjustment that involved sharp devaluations, interest rate hikes and spikes in the prices of fuel and power. In two instances, Shaikh was brought in to clean up the mess.

Now Ishaq Dar is back as finance minister and promising more of the same. He has laid out his priorities in brief remarks given to reporters as he entered his office in Q block after taking oath, saying the country needs to see lower interest rates and lower exchange rates in an effort to revive growth and combat inflation. But everybody knows that the country does not have the resources to make this happen. A country cannot lower interest rates and the exchange rate simultaneously without giving rise to inflation and drawing down its foreign exchange reserves. If reserves are already low, and inflation is already high, the resources with which to “revive the economy” are simply not there.

So what exactly does Dar expect to do with these constraints? One possibility could be that he is counting on the arrival of massive international support. But so far indications are that whatever support does come may be enough to keep things on an even keel, but grossly insufficient for purposes of “reviving the economy”. Another possibility is that he will extract more resources from the economy by taking a firm line against banks, exporters and money changers, by accusing them of “manipulating the exchange rate,” but even at its best, this course of action can shore up the rupee for a brief period only. At the end of the day, if the dollars are not there the rupee will have to slide.

Lowering interest rates can help release fiscal resources, but doing so carries its own costs. Hundreds of billions of rupees can be saved on debt service payments depending on how much interest rates are cut by, making it easier for the government to reduce reliance on taxes on fuel and power to raise resources to pay its bills. But lowering interest rates can also fuel inflation, and more importantly, run afoul of the commitments given to the IMF. Already the government is struggling to get banks to participate in treasury bills auction beyond limited three-month tenors. With rate cuts it will have to strongarm the banks into participating.

There is little doubt that Dar will mount an effort to do precisely this. He will try to shut down the dollar, weigh in on the State Bank, and strongarm vested interests in the economy to keep their ambitions in check. And it will work briefly. For a while the exchange rate will be reduced, and some fiscal space may well be opened up. Rates of the Petroleum Development Levy have already been cut in defiance of the commitments given to the IMF to raise these by Rs 5 per month for the next few months. The Consumer Price Index will register a few declines, even if marginal.

But it will be impossible to run the economy like this for any meaningful length of time without giving rise to destabilising deficits all over again, something the economy cannot afford at this point in time. Dar’s brief is to keep the IMF programme on the rails, prevent a default, bring down inflation to reduce the burden of adjustment on the citizenry, while doing whatever is possible to get the wheels of the economy to start moving again. These are contradictory objectives. They will pull him in opposing directions, and persisting down this road will destabilise the economy.

The question naturally arises: Will Dar have what it takes to realise the limits of his own power and correct course in time? A billion-dollar bond is maturing in December, for example. Will he honour that commitment and make the repayment? Or might he turn to his creditors and tell them “I have the dollars, I would rather use them to help my people instead of handing them over to you. Can we please come to an agreement about repaying this money at a later date once things have settled down a bit at home?”

Consider his own track record to search for an answer, as well as the track record of every other finance minister from the past 20 years (with the exception of Shaikh). Shaukat Aziz ran the economy into the ground by artificially pumping growth through a combination of low interest rates, fixed exchange rate and high fiscal spending. Even as the current account and fiscal deficits registered blowouts through the year 2007, he steadfastly refused to slow the economy or reduce the fuel subsidy bill (at that time there was a circular debt in the fuels segment in addition to power). His own advisor – Salman Shah – went public even with the catastrophic bill mounting on fuel subsidies, warning that the new government after the elections will face a massive bill (more than Rs 700 billion, which was an even more massive amount at that time compared to today). His efforts to try and persuade his bosses, Aziz initially, and then Musharraf during the months of the interim government, were in vain. There was no political appetite to take a hit by hiking fuel prices massively at a time Musharraf was looking at going into elections.

Dar himself steadfastly refused to acknowledge reality in 2017 as the pressures on the current account deficit mounted to dangerous levels. Remember his angry tirade in July of that year when the State Bank unexpectedly delivered a devaluation of the rupee to ease the pressure on the reserves? He launched an internal inquiry into that episode and brought in a pliant governor to ensure such a thing never happens again. All through that year as the pressures on the economy mounted he refused to acknowledge them, saying the trade deficit is temporary, that growth will sort out the deficits in due course, that it is alright to bridge these deficits with short term borrowing till the whole thing autocorrects once the CPEC related investments begin commercial operations.

Of course, things did not autocorrect, and ultimately the country had to undergo another round of a painful adjustment. But by then he was out of power and could stand on the sidelines and argue that had he been finance minister, he would not have allowed things to come to this. Incidentally, all finance ministers have said this once out of power.

Asad Umar had a brief stint as finance minister, but towards the end he too was refusing to acknowledge that the economy is veering into dangerous territory and without an IMF programme it faced a potentially catastrophic meltdown. In his last days he had begun talking about a “homegrown programme” instead of going to the IMF, even arguing that the deficits had been sorted with Saudi and Chinese support that had come in during those days. Of course, the deficits were not sorted, only bridged temporarily, and his own attempts to try and put together a “mini budget” in January 2019 to help meet the IMF partially were reversed before they were even announced, and instead of a set of new revenue measures, what he unveiled in that “mini budget” was a set of tax cuts and further incentives for industry. He argued at the time that this was an “economic revival package” instead of a “mini budget”.

Our own history tells us that finance ministers, including Dar, have a hard time acknowledging the limits of their power. They power ahead with relief and incentive measures at a time when they cannot afford it, when doing so imperils the economy. This powering ahead is driven either by a refusal to acknowledge the dangers, or an inability to persuade their political bosses to take the hit that will have to be taken to stabilise things. Now that he is back in power, the economy is still teetering on the edge of danger, and he is once again talking about growth and relief. Will Dar have what it takes to acknowledge when he has done all that is possible and halt before things get out of hand? That is the big question hanging over the country now.