Despite recent liquidity issues and a tough economic environment, Al Shaheer is looking forward to a highly profitable year

After the remarkable success of its MeatOne brand, Al Shaheer Corporation (Ltd) has launched its latest brand ChefOne and entered the frozen foods market. Just take a look at the MeatOne website and you will see a tantalising array of product offerings on display from mutton and beef cuts to oceanic Spanish Mackarel, Red Snapper, and Baby Backti (we’re not quite sure what this is but it looks pretty good!).

Al-Shaheer was founded over a decade ago with the aim to export high quality halal meat to the world. Over the years, it has become one of the leading exporters of meat from Pakistan, and one of the fastest growing food businesses in the country.

In spite of some losses and recent liquidity problems, the story of Al Shaheer is a story of persistence to become the best quality meat provider which is fresh, hygienic, and Shariah-compliant. With the intent to raise over Rs 700 million in cash through a rights issue in the next few months, Al Shaheer is fully committed to a huge expansion that won’t just provide huge returns in the coming year but may also just make it the leading meat exporter in Pakistan.

Al Shaheer Corporation (PSX: ASC) was formed in 2008 as a meat business to cater to the local and global halal meat industry. It is one of the leading meat exporters in Pakistan. Its primary export markets include Middle Eastern countries such as Saudi Arabia, Dubai, Kuwait, Oman, Bahrain and Qatar. The company claims that its meat processing facility in Karachi is the largest private facility in the country.

Al Shaheer launched MeatOne as its first retail brand in 2010 to provide a one stop fresh meat solution to its customers. It tries to be meticulous in every step of the meat process. Starting with a carefully designed meat selection process to choose the highest quality of cattle with the help of skilled vets, the animals are sent to the company’s abattoir (fancy name for slaughterhouse) in Karachi to be slaughtered in a completely ‘halal’ way.

Transporting the meat to the retail outlets is a tricky business because the quality of meat has to be preserved. One of the modern ways to do this is by flash-freezing the meat, which is a way of freezing the item quickly with cold circulating air. While Profit was unable to ask the company directly about this process, an unnamed industry insider told us that flash freezing is a common method used today which makes the frozen food rock solid. This process keeps the food in the best condition possible before it is made ready for transport.

In 2014, Al Shaheer launched its second retail brand ‘Khaas Meat’ as an affordable, hygienic, and high quality alternative to the neighbourhood butcher shops. A section of Khaas Meat was also opened in 2015 in major superstores across Pakistan. In the same year, the company decided to go public and list itself on the Pakistan Stock Exchange (PSX).

In early 2017, Al Shaheer Corporation changed its name to Al Shaheer Foods to establish itself as a ‘foods’ company. Now it also offers frozen foods, vegetables, fruits, salads, and ready-to-cook and ready-to-eat products.

Most recently in 2022, the company has launched its newest brand of ‘ChefOne’ which is now available in the leading stores of Pakistan. It provides frozen food products like poultry, meat, and fish, and so on. One of the distinguishing features of the MeatOne and ChefOne brands is the high variety of product offerings and the numerous different cuts of meats. Additionally, the company also started commercial production of frozen chicken at its Lahore plant during the year.

Al Shaheer has a number of business channels including export, retail, delivery and ecommerce, and a professional line.

Al Shaheer has one of the highest free floats on the PSX with 75% of its shares freely available for trading. A high free float suggests that the sponsors of the company are open to bigger expansions and are not afraid of sharing the ownership of the company with multiple investors. The single majority shareholder of the company is the founder and CEO Mr Kamran Khalili who currently owns 72,585,447 shares or 24.20% shareholding.

However, as in any business, liquidity is very important for expansion and meeting working capital requirements. Al Shaheer too has had to deal with the issue which is why the company had to issue right shares three times in the past three years.

Al Shaheer issued 40.7% rights shares in December 2019 and another 50% in December 2020. This raised the paid-up capital of the company to 2,999,389,000 from the total authorised share capital of 3 billion. This meant that if Al Shaheer was to raise any more cash with the rights issue again, it would have to increase its total authorised capital. And this has happened now.

As of November 28, 2022, the board of directors of ASC have decided to increase the total authorised share capital of the company from Rs 3 billion to Rs 4 billion. This was followed by a declaration of another rights issue of 25% from the paid-up capital of the company. When the entitlement of shares is decided later this year, the company’s total paid-up capital is expected to increase to approximately 3,749,236,070 from a total authorised share capital of 4 billion.

According to its notice to PSX, ASC needed to issue these new shares to invest further in its poultry plant and food processing facility in Lahore and meet its working capital requirements. The company expects the rights issue to help increase the revenues and profitability of the business and provide higher returns to the shareholders. The rights issue is expected to bring in almost Rs 750 million in cash to the company.

The company had a challenging year in terms of profitability as it posted a loss of Rs 238 million, the first loss after three consecutive profitable years. Nevertheless, the topline posted an yearly growth of 12.6% but it was not the highest turnover in its history. Higher cost of sales in the year also resulted in a decreasing gross profit margin of 13.7% from 24.5% a year before.

As the chairman Mr Qaysar Alam notes in the company’s annual report for the year 2022, “During the year, economic and inflation crises were the key factors which adversely affected our margins; our volumes and margins faced immense pressure from the pricing strategies of local and international businesses in export market. As a result, the Company was unable to pass on all its costs to the consumers. These business pressures also coincided with the completion period of the new poultry and processed food project.” 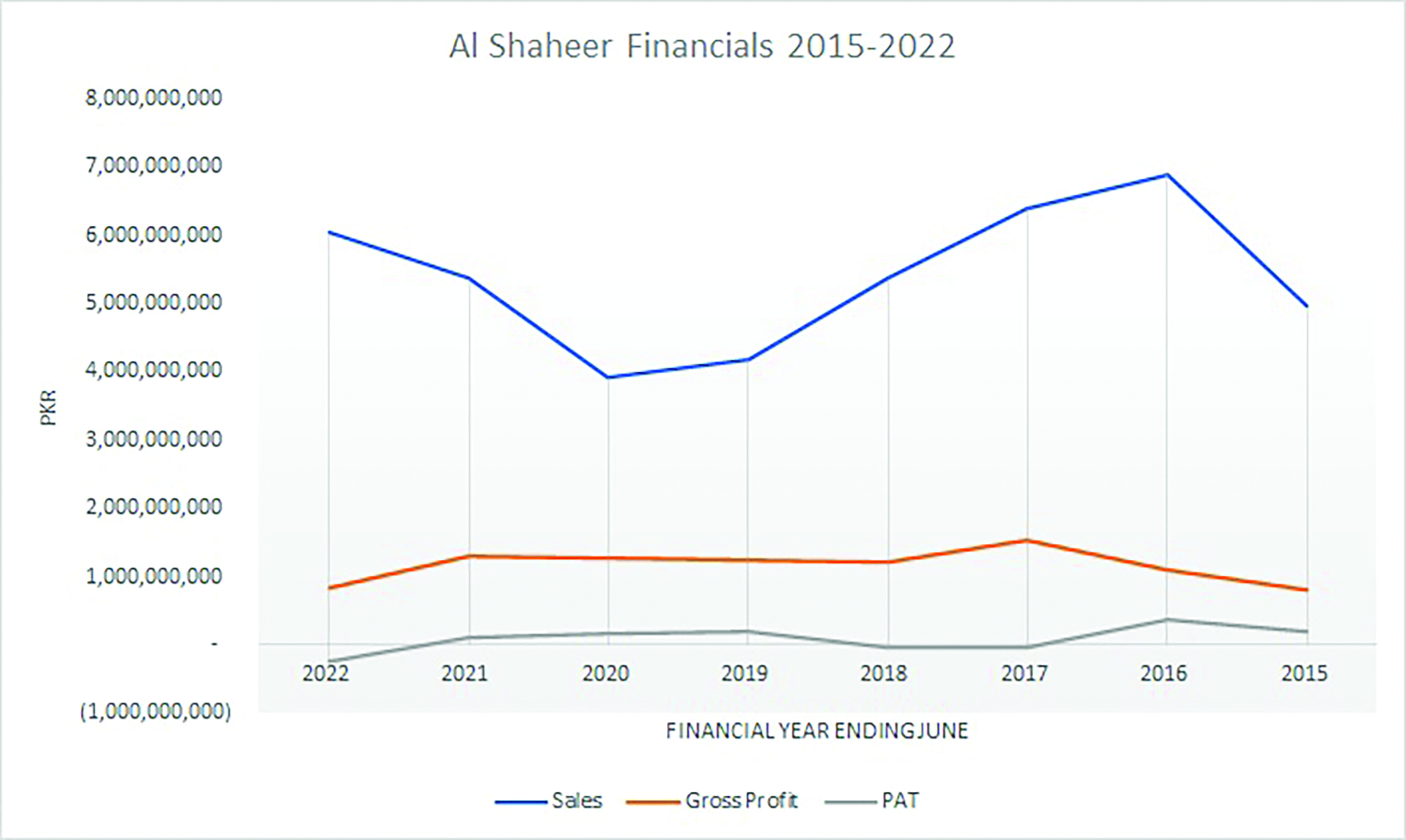 It can be seen from the financial performance of Al Shaheer that its gross and net profits have remained relatively stable despite the ups and downs in the annual turnover of the company. The margins in the meat industry have continued to pose a problem for Al Shaheer since its inception but given its persistence and continuous expansion plans, a suitable economic environment can ensure that Al Shaheer is able to earn higher margins in the future.

But while the latest annual figures of the company might not be so rosy, the recent quarterly results certainly are. For the first time in four quarters, Al Shaheer has posted a profit of Rs 136 million. According to the quarterly report, the company credits this to the increase in revenue generated from the new frozen food business and also due to the strong growth in its institutional sales business.

The state of the industry

According to a recent report published by Salaam Gateway, a Dubai-based news and insights platform on the global Islamic economy, the global halal food and beverage industry is valued at $415 billion. The top 10 biggest exporters of halal meat had a total trade value of $14.04 billion. The top three halal meat exporting countries are all non-Muslim majority like Brazil, Australia, and India. Pakistan ranks 19th as the biggest meat exporter in the world with exports of over $400 million.

In 2021, Al Shaheer Foods was one of only 10 local meat producers selected to export meat to Egypt. In September 2022, Al Shaheer signed a business agreement with McDonalds Pakistan and became the first local company to supply beef products to the fast-food giant.

Even though Profit was unable to get in touch with Al Shaheer, despite several attempts at reaching out to them, the recent quarterly results have shown that the company is well positioned to become the profitable company that it has always envisioned for itself. If we consider the recent devaluation of the Pakistani rupee this year, we can expect it to help Al-Shaheer in achieving an even higher export sales figure in its current financial year. 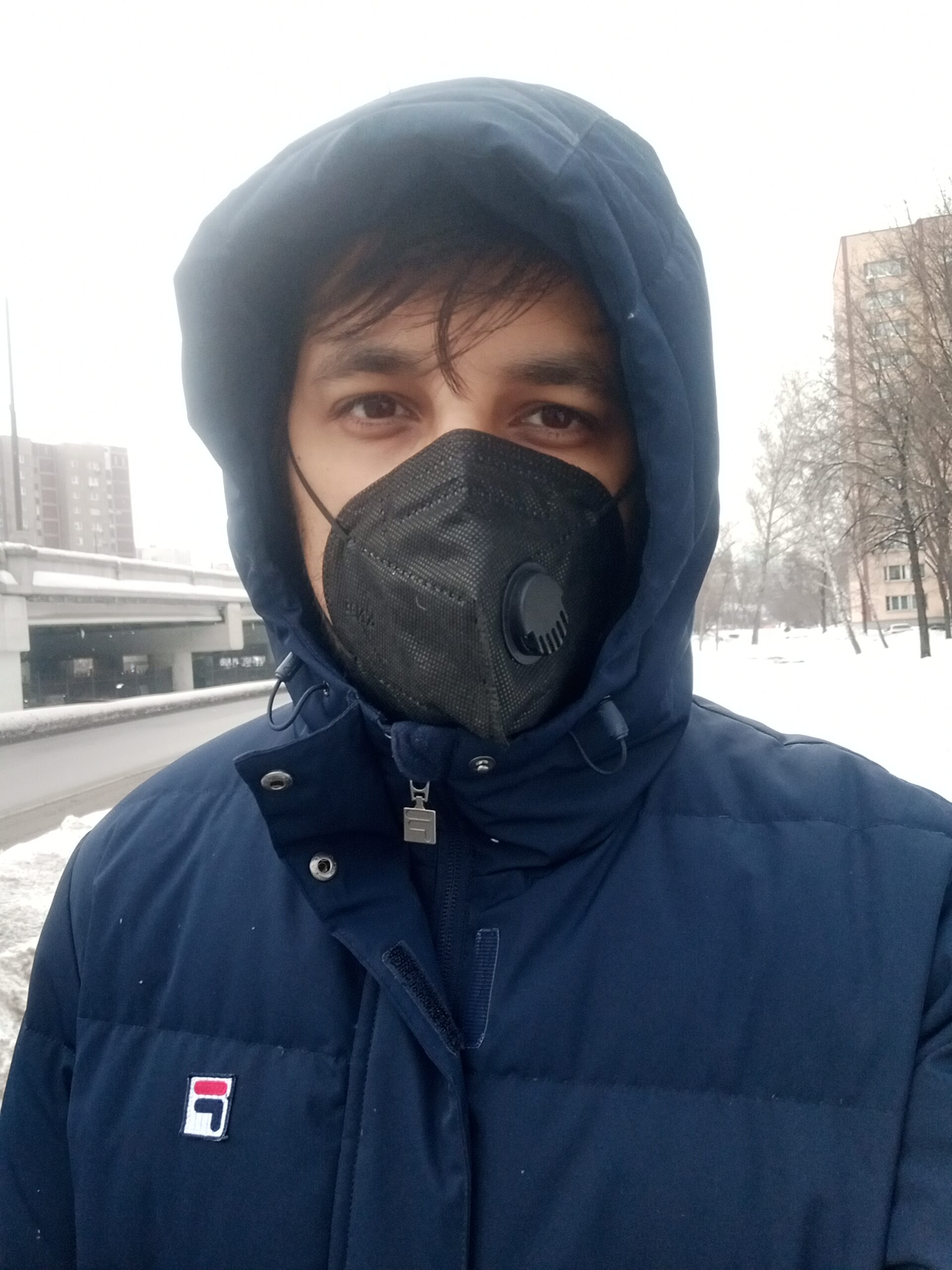