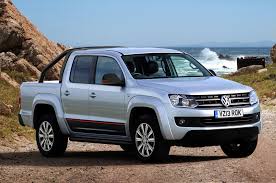 Volkswagen Commercial Vehicles is in its final round of talks with Premier Systems Private Limited – the authorised importer of Audi vehicles in the country to set up a manufacturing/assembly plant for its Amarok and T6 (transporter range) models, reported a national daily.Amarok is a direct competitor to Toyota’s Revo and the T6 is a multi-seat passenger van. The officials believe robust vehicles such as Volkswagen are a must in a country like Pakistan. It was also learnt that the company aims to develop a large dealership and the target is to have 40 dealerships nationwide. Volkswagen Commercial will utilise the same plant that Audi intends to use for the assembly of its own vehicles in Karachi. Audi AG, the German carmaker, is owned by the Volkswagen Group. Premier Systems will be engaging itself in preparing grounds for the entry of  Audi and Volkswagen assembly plants into the country. Test vehicles, a standard practice before any new model is launched, will do trial runs across the country. The results will then be sent back to Germany for feedback and changes, if necessary. It was reported back in November that the Audi plant alone would mean an investment of around $30 million. The assembly of Volkswagen could take the amount much higher. The recent report follows multiple announcements of various carmakers to penetrate into the Pakistan automobile industry. Recently, Nishat Mills – a textile giant – announced a joint venture agreement with Hyundai to assemble vehicles in Pakistan. Similarly, Lucky Cement had already announced to collaborate with Kia Motors to set up an assembly plant in Pakistan.