Stocks bleed as the benchmark closes with 925pts in red 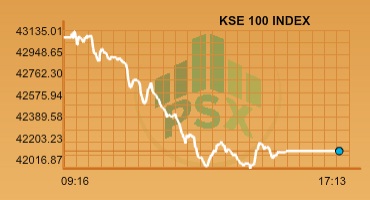 Bears held their grip over the Pakistan Stock Exchange (PSX) in the first trading session of the week. Having hit hard by the political uncertainty, the benchmark KSE 100 closed just 7 per cent away from its 52-week low. The market has fallen from an all-time high of 53,127.24 points, dropped to 42,016.87 points intraday, just 2,768 points away from a low of 52-weeks.

The Pakistan Stock Exchange on Monday continued its bearish trend as the KSE-100 index plunged further down by 1026 points to reach 42,052.14 points in the first five hours of trading.

KMI 30 index slipped 2.52 per cent and the KSE All Share Index depreciated by 1.95 per cent. Only 44 scripts managed to grab gains while 310 declined.

Thin volumes were seen at the exchange with a total of 153.16 million shares exchanged. Azgard Nine Limited (ANL -1.35 per cent) remained dominant and 15.12 million shares were traded in the script. The Bank of Punjab (BOP -4.89 per cent) and TRG Pakistan Limited (TRG -4.99 per cent) followed suit with volumes of 11.42 million and 8.75 million. The commercial bank sector garnered most interest, cumulative volume of 26.88 million, but gave away 0.98 per cent of its market capitalisation.

It’s been a tough ride for the cement sector, the star of 2016 clipped 4.28 per cent off its market capitalisation on Monday. Lucky Cement Limited (LUCK -5.00 per cent) and D. G. Khan Cement Company Limited (DGKC -5.00 per cent) both floored at lowest price of the year.

Thatta Cement Company Limited (THCCL -4.93 per cent) declared financials early on Monday morning; the company registered a 28.48 per cent growth in sales but gross profit margins remained flat at 32 per cent. Higher taxation dragged profit after taxation down to Rs 5.82 million, 5.28 per cent lower than FY16. Earnings per share clocked at Rs 5.84 with cash dividend of Rs 2.35 per share.

Abbot Laboratories (Pakistan) Limited (ABOT -0.40 per cent) registered an upwards movement in sales of 23.51 per cent QoQ. This pushed net profits up by 38.09 per cent to convert into per share earnings of Rs 9.94.