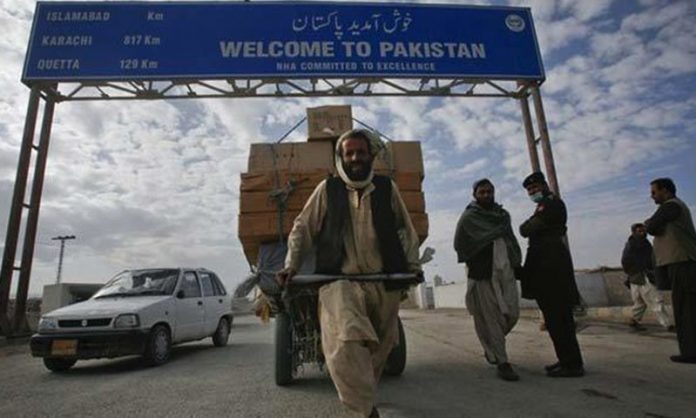 PESHAWAR: The new rules created by Pakistan for trade with Afghanistan and stringent documentary requirements has impacted decades-old commerce between the two countries.

The trade has slowed down because of these new rules and the simmering tensions between the two countries have put traders on both sides in a quandary, reported Express Tribune.

Since the enforcement of these rules, it is essential for traders at Torkham border to provide their National Tax Number (NTN), certificate of contract between buyer and seller, import permission, payment receipts, grading certificate and certificate from chamber of commerce.

Due to tense relations, not a single truck entered for two days in Torkham border from Afghanistan. Data compiled by Afghanistan-Pakistan Joint Chamber of Commerce and Industry, goods trade between the two countries dipped $1b year-on-year to touch $1.5b by 2016, said an importer at Torkham border.

He added because of simmering tensions between Pakistan-Afghanistan had jolted trade and regular closures of Torkham border had brought down the bilateral trade volume to $500m in first few months of 2017 from $3b a few years ago.

Importer cautioned that the stepping in of India and Iran would weaken trade ties between Pakistan and Afghanistan. Customs Clearing Agents Association President Hayatullah Shinwari criticized the newly enforced rules for trade on Torkham border, which he said were interrupting smooth flow of goods trade.

Torkham’s Custom Department has issued a directive notifying importers to provide proper documents for shipments being received and sent from across the border. Shinwari added this decision had resulted in thousands of shipments being stranded on both sides of the border.

Federal Government, Khyber-Pakhtunkhwa governor were requested by trade and transport associations to consult stakeholders regarding these new rules and regulations to avert another slow-down in pace of trade at the border.

They further demanded the government to cement and strengthen trade ties with Afghanistan to stave off the threat of India and Iran. They added adding impediments would only cause harm to Pakistan, which has dominated the Afghan market for decades.