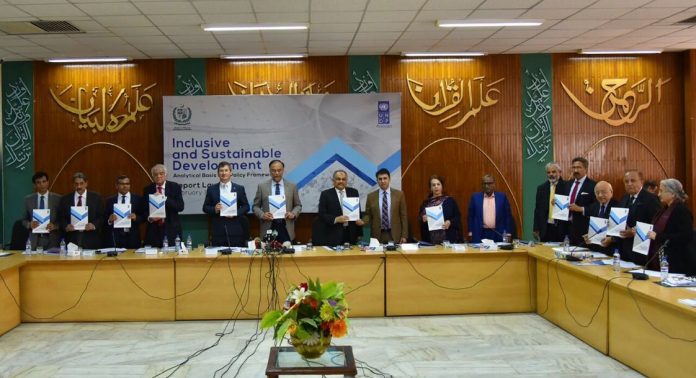 ISLAMABAD: Planning, Development and Reform Federal Minister Ahsan Iqbal has maintained that the government while devising an action plan for the implementation of Sustainable Development Goals (SDGs) realised the need to devolve education and health sectors at the district level to improve public service delivery and implementation of the SDGs in letter and spirit.

Efforts in this regard enabled the government to have district levels SDGs implementation plans as well as resulted in the formulation of a broader national framework.

He made these remarks while chairing a ceremony for the launch of “Inclusive and Sustainable Development” an analytical basis and policy framework report.

Ahsan Iqbal said, “Pakistan has accorded the highest priority to goals which will enable it to join the league of upper-middle-class countries by 2030”. He said the goals include zero poverty and hunger, universal access to health services, education, modern energy services, clean water and sanitation and added that Pakistan is the first country to adopt SDGs 2030 agenda through a unanimous resolution of the parliament as Pakistan Development Goals.

“We believe that SDGs agenda of development isn’t an international agenda, it is our own agenda. It reflects our ambition and desire to give our people a better quality of life. Therefore, we must take full ownership of SDGs with complete devotion and passion”, he further said.

The minister said that the government conducted post-Millennium Development Goals (MDGs) consultations with all stakeholders for coordinating and strengthening efforts at federal and provincial levels to achieve the set targets. He further maintained that Pakistan Vision 2025, advocates for inclusive and sustainable development as the basic principle on which the future economic endeavours of the country could be based. Ahsan Iqbal said that the Vision 2025 provides a comprehensive national long-term strategy for achieving inclusive growth and sustainable development.

He suggested that Pakistan has to ensure quality education at all levels to impart best skills to its youth by improving the physical infrastructure, focusing on teachers’ training and curriculum and examination reforms. He pointed out that most of the areas concerning SDGs fall under the jurisdiction of provinces and their service delivery rest with them. However, realising capacity issues, the federal government decided to enhance working relationship with the provinces to provide them with every possible support for successful implementation of the SDGs.

He said the worst power outages had jeopardised the entire system of the country, industrial production remained at lowest level but the current government due to strenuous efforts revived the economy. “Now after 4.5 years, the country’s economy is being ranked among the five top growing economies of the world.”

Owing to various steps taken by the current government 2013 onwards, he said the country’s economic growth rate reached 5.3 per cent which is the highest during the last nine years. “Economic growth had stagnated at 3 per cent when this government came into power. Last year, we achieved a growth rate of 5.3 per cent and we are expecting it to reach 6 per cent this year,” said the minister, adding that the industrial growth had increased significantly due to the addition of 11,000MW of electricity to the national grid.