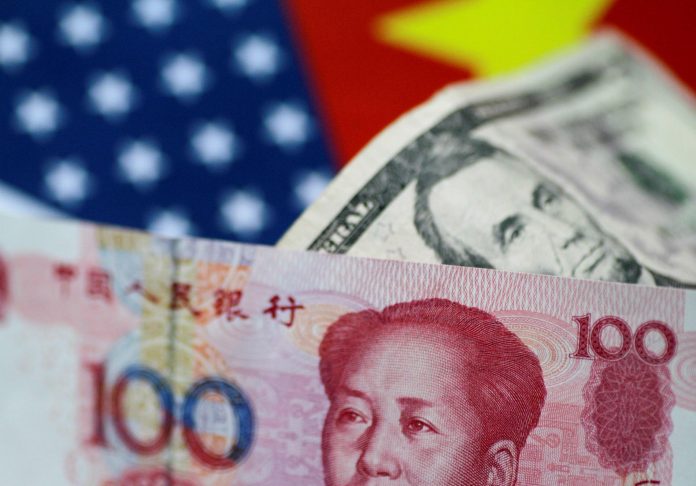 SHANGHAI/TOKYO: Asian shares rocketed to three-week highs on Friday while the dollar softened on a report that U.S. President Donald Trump is taking steps to resolve a damaging trade war with China that has cast a pall over the global economy and financial markets recently.

MSCI’s broadest index of Asia-Pacific shares outside Japan jumped 2.7 percent to hit its highest level since Oct. 10. It is up 6.4 percent on the week, on course to mark its best weekly performance in three years.

“Asia is the most sensitive to trade wars so Asian shares naturally have the most to gain from the prospects of a trade deal,” said Makoto Sakuma, researcher at NLI Research Institute in Tokyo.

MSCI China gained 7.9 percent so far this, about the double the 3.5 percent gains in MSCI’s broadest gauge of global stocks, ACWI.

Bloomberg reported that Trump is interested in reaching a trade agreement with his Chinese counterpart Xi Jinping at the Group of 20 nations summit in Argentina later this month and has asked key U.S. officials to begin drafting potential terms, citing people familiar with the matter.

One person said a sticking point in any potential deal is intellectual property theft, where the Trump administration has sought to take a hard line, and it was unclear if Trump was easing up on U.S. demands that China has resisted.

Earlier this week, Trump was quoted as saying Beijing wasn’t ready to do a deal and he was prepared to slap more tariffs on China if his meeting with Xi was not productive.

The Bloomberg report came after the two leaders expressed optimism on Thursday about resolving their bitter trade disputes, one of the major factors behind a recent global equity market rout.

“While we are still cautious over a full resolution of recent tensions in the medium term, resumption of dialogue between Washington and Beijing would be good enough to investors for now,” said Tai Hui, chief market strategist, Asia Pacific, at J.P. Morgan Asset Management.

“The next four weeks between the U.S. mid-term elections and the G20 meeting in Argentina on Nov 30 will be important to see how things progress.”

On Thursday, the Dow Jones Industrial Average and the S&P 500 each gained 1.06 percent while the Nasdaq Composite rallied 1.75 percent.[.N]

After the bell, though, shares of Apple tumbled about 7.0 percent after it said sales for the crucial holiday quarter could miss Wall Street expectations due to weakness in emerging markets and foreign exchange costs.

Apple suppliers in Asia largely shrugged off the news as investors hoped some progress was being made on trade.

IN THE (DATA) DUMPS

Investors will be looking ahead to a U.S. jobs report, due at 1230 GMT, for more indications on the health of the U.S. economy and the clues on the pace of further interest rate rises.

U.S. nonfarm payroll figures are expected to rise 190,000 in October from 134,000 a month earlier, with average hourly earnings seen increasing 0.2 percent in October after a 0.3 percent gain the previous month.

Those numbers follow data this week revealing slower factory growth around the world, adding to worries about the outlook for corporate earnings, business investment and trade.

Data from the U.S. showed cooling manufacturing activity in October as a measure of new orders hit a 1-1/2 year low. That came after manufacturing surveys showed factory activity and export orders weakening across Asia as the impact of the trade war deepened.

In currency markets, the dollar eased off as improved risk sentiment helped to boost other currencies.

The yuan strengthened to a high of 6.9092 per dollar in onshore markets and also firmed in offshore trade, pulling away from the sensitive 7 level.