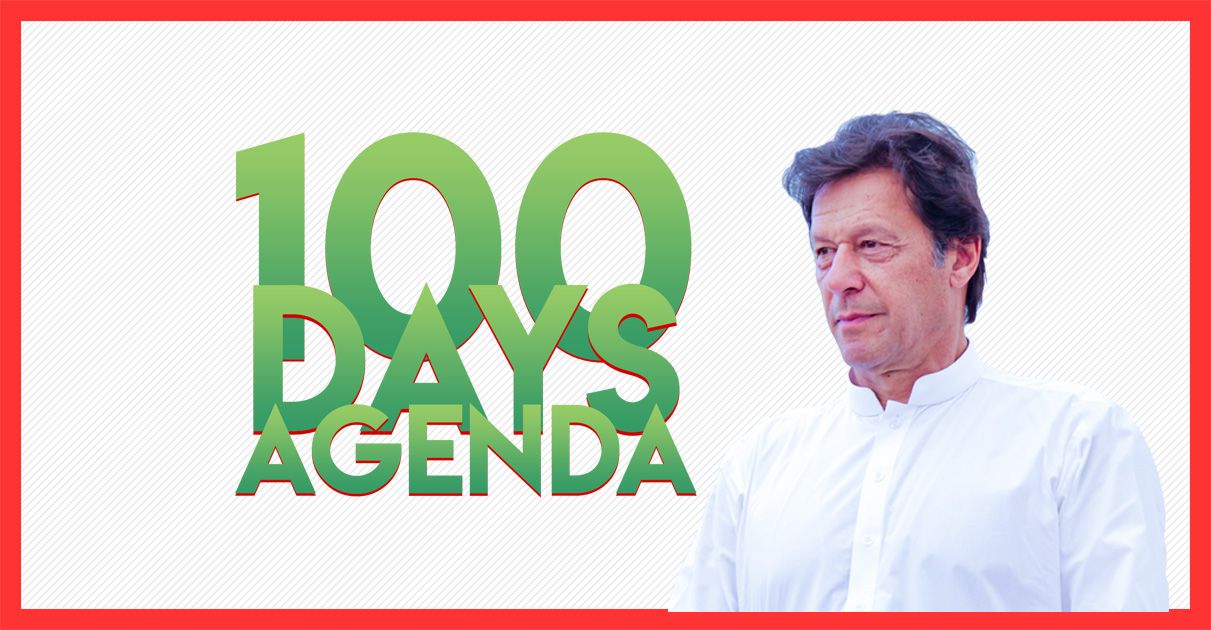 When the Pakistan Tehreek-e-Insaf (PTI) claimed victory in the July 25 elections this year, Pakistan’s economy was on the verge of a balance of payment crisis that threatened the strength of its currency and its ability to pay for imports or repay debts. The total financial deficit that the government faced amounted to a whopping $12 billion and another bailout from the International Monetary Fund (IMF) was on the cards. Hence, handling the economic situation was the top priority for the government and a cornerstone of its performance barometer on the agenda for its first 100 days in power, a benchmark which the Imran Khan administration had set for itself.

November 29 marked exactly 100 days since the PTI assumed office, and almost all of the major economic indicators seem to have deteriorated during the timeframe. The Pakistani rupee compared to the United States Dollar stood at Rs 122.5 as of August 18 and by November 25 it depreciated to Rs135.2. 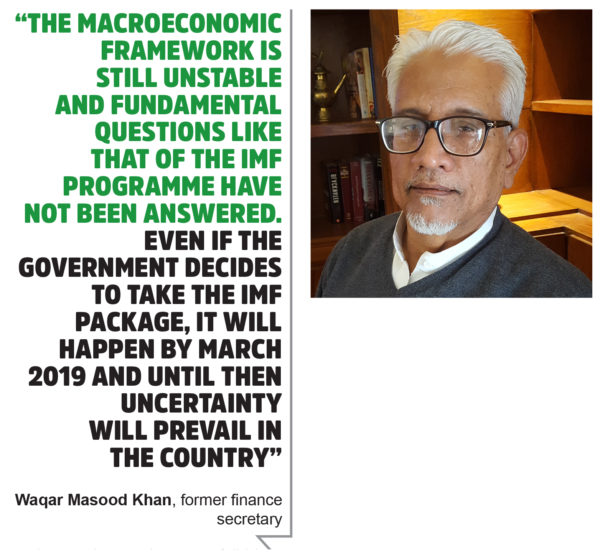 So has the government failed?

Dr Salman Shah, the former finance minister, disagrees. “The first 100 days are for making key political appointments and setting the direction of the government’s policies and PTI government seems to have achieved that,” he says while talking to Profit.

Simply put, the first 100 days might be enough for setting policy directions, but when it comes to a result-oriented policy implementation, a longer time frame is needed.

To IMF or not to IMF?

As a rule of thumb, economies and financial markets can perform well despite bad news, but not under uncertain circumstances. When the Pakistan Muslim League- Nawaz (PML-N) government came to power in 2013, it was quick to knock on the IMF’s door and within the first 100 days, the former finance minister Ishaq Dar announced 19 priority actions in the budget and managed to sign a $6.4 billion bailout package on July 4, 2013, hence doing away with the uncertainty in the market.

However, how PTI dealt with the situation is a different story. The economic environment the PTI government inherited was far from ideal. The country’s foreign exchange reserves at the start of its tenure stood at a four-year low, pressuring the domestic currency and triggering fears that the country might soon be caught up in a full-blown balance of payment crisis, making it unable to finance its monthly import bills and debt obligations.

Uncertainty prevailed, with the Finance Minister Asad Umar refusing to rule out another bailout by the IMF and at the same time pledging to exhaust all other options before taking that route to fill the $12 billion financing gap. Now 100 days into the government, it is still unclear whether the government will be taking the IMF bailout, or keep looking for other funding avenues. 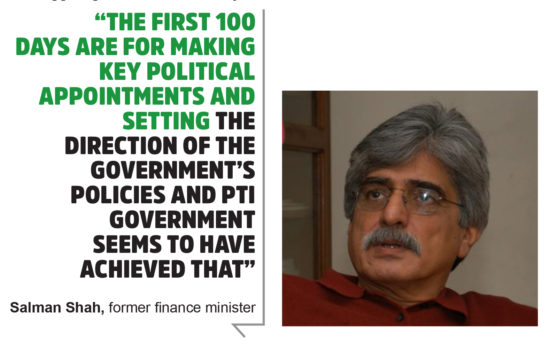 Until last week the State Bank of Pakistan (SBP) had received $1 billion from a total $3 billion direct support deposit promised by Saudi Arabia. Assurances have also come in from the neighbouring China of a financial package larger than the one offered by the Middle Eastern kingdom. However, the IMF package still hangs in the balance, with the finance minister putting it on hold for another two months.

“The macroeconomic framework is still unstable and fundamental questions like that of the IMF programme have not been answered. Even if the government decides to take the IMF package, it will happen by March 2019 and until then uncertainty will prevail in the country,” says the former finance secretary Waqar Masood Khan.

The effects of the uncertainty are visible at the PSX that went form 42,446 points on August 18 to 40,869 points on November 25, losing almost Rs607 billion in market capitalisation during the period. “There is no clarity on the issue of balance of payment which is dampening the stock market,” says Samiullah Tariq, the lead research analyst at Arif Habib Ltd, an investment bank.

Despite the macroeconomic uncertainty, the PTI government has been able to make substantial progress pertaining to small and medium enterprises and getting foreign corporate entities to invest in the country. An Economic Advisory Council (EAC) has been formed and the policy work that it has done has had a substantial impact on the Pakistani industry.

Gas prices have been reduced to $6.50 per million British thermal units (mmbtu) for five key export sectors that include textile, sports goods, leather, carpets, and surgical goods, leading to the reopening of almost 100 textile mills. On the investment front, foreign corporate entities are not shying away from investing in the country.

Pepsico AMENA CEO Mike Spanos in his meeting with the prime minister pledged a $1 billion support over the next five years for socio-economic development in Pakistan. Similarly, Coca-Cola will be investing an additional $200 million in addition to its existing $500 million in the country. Suzuki Motors has expressed interest to invest a $450 million and the world’s largest private sector energy company – Exxon Mobil – has reopened its office in Pakistan after a gap of 27 years.

“FDI from other countries excluding China had been falling for quite some time, so the recent increase in FDI is a positive step,” says Samiullah Tariq. “What Pakistan needs right now is inflow of FDI into export-oriented industries. Volkswagen plans to assemble cars in Pakistan and export them from here. And if Exxon Mobil is able to make a substantial discovery of gas reserves then Pakistan’s import bill might fall substantially.”

The PTI government plans to begin the turnaround of key State-owned Enterprises (SOEs) by creating a sovereign wealth fund and taking SOEs out of the purview of cabinet ministries.

“The decision making of the state-owned enterprises is in the hands of bureaucrats and politicians, who have no background in industrial and commercial activity, who have no clue how business is run. So we want to turn them around and put them in the hands of professionals who have been trained to manage such enterprises,” said Asad Umar, in a pre-election interview with Profit.

For this purpose, a holding company for the SOEs has been created and the process of shifting ownership of the SOEs to the wealth fund has been initiated. According to government officials, the aim behind creating the wealth fund is to make the loss-making public sector enterprises operational and profitable through funding from the fund.

Once this is done, the entities with the exception of Pakistan Steel Mills, Pakistan International Airlines (PIA), Pakistan Railways, Utility Stores Corporation, National Highway Authority and the Civil Aviation Authority (CAA) will be sold off to the private sector at a higher rate compared to what they would have fetched otherwise. However, the former finance secretary Waqar Masood Khan disagrees with the notion of taking these SOE’s out of the purview of line ministries. “What is the purpose of having line ministries if you are going to take their relevant enterprises away from them,” he asks.

The government might be moving in the right direction, but such fundamental questions still remain unanswered. 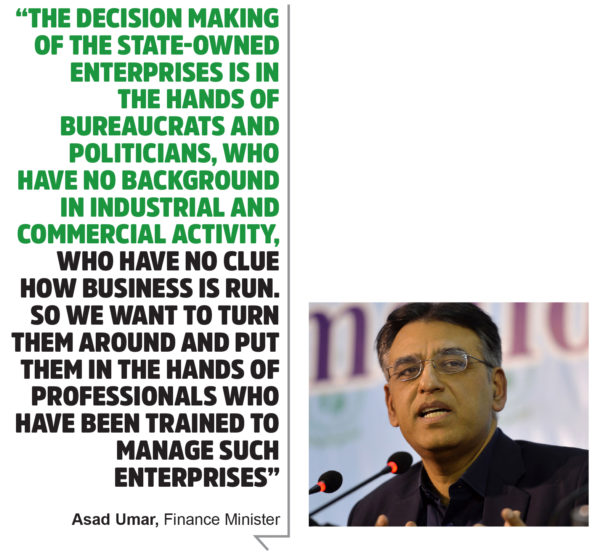