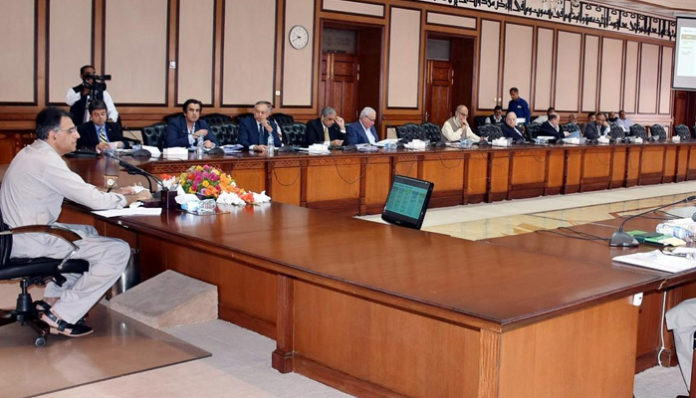 ISLAMABAD: The Economic Coordination Committee (ECC) of the Cabinet, which would be held under the chair of Finance Minister Asad Umar, is likely to take up five agenda items, including the shortage of Urea fertilisers, on Tuesday (today).

The ECC, in its meeting of November 7, allowed two plants on the Sui Northern Gas Pipeline Limited (SNGPL) system, Fatima Fertilizer and Agri Tech, to continue their operations for further two months viz December 2018 and January 2019. However, in order to resolve the pricing issues, the committee tasked Advisor to PM Abdul Razzaq Dawood to formulate and recommend necessary modalities to the ECC.

In pursuance of the ECC-directed consultative session held by the advisor on November 19th and 30th, wherein representatives from the Ministry of National Food Security and Research, finance and energy divisions participated, a consensus emerged that keeping these plants operational was the best available option.

They agreed that feasible gas prize should remain within the current dealer transfer price, ceiling Rs1712/bag is Rs 782/mmbtu. “Since the gas price is charged in advance by SNGPL, the subsidy to SNGPL also needs to be paid in advance. The cumulative amount comes to Rs4.70 billion,” it emerged.

In view of the above-stated fact, it was proposed that SNGPL may be given Rs167/mmbtu subsidy for supplying gas to Fatima Fertilizer and Agri Tech till December 7, 2018. Besides, Rs869/mmbtu for supplying 100 per cent RLNG to these plants from December 8 to January 1, 2019.

The amount of Rs0.79 billion may be paid forthwith on an actual basis and Rs3.91 billion approximately may be paid in two monthly tranches on December 7, 2018, and January 7, 2019, that is subject to final reconciliation.

According to sources, representatives of the Finance Division did not agree to the proposed mechanism of subsidy and insisted that it should be ex post facto and on actual basis. However, in view of the huge impact on the liquidity of plants, the Ministry of Industries remained firm on the proposal that the plants should be facilitated so that they keep functioning and that as the subsidy would be credited to SNGPL, it can always be reconciled.

The other option is to fill the supply gap of around 316,000 MT (in case these plants are shut down) by imports.