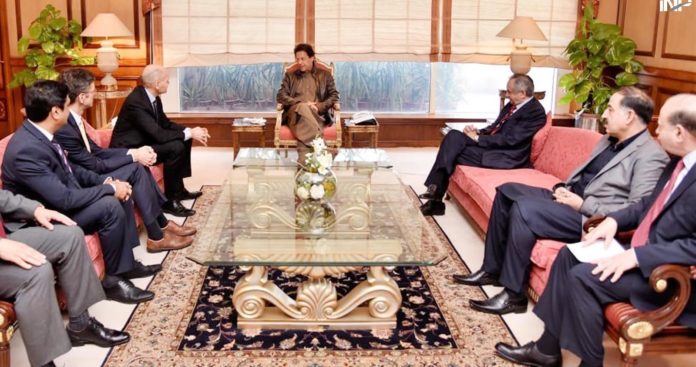 The task force is being established with an aim to carry out foresight exercises at regular intervals in order to constantly re-evaluate national priorities and put in place strategies and action plans, with delineated timelines, to build a powerful knowledge economy.

The PM’s task force on technology-driven knowledge economy would be comprised of leading scientists/engineers, representatives from the private sector, federal and provincial governments.

The decision was taken during a meeting of the prime minister with former science and technology minister Dr Attaur Rehman at Prime Minister’s Office.

Dr Attaur Rehman briefed the prime minister regarding the progress made on the construction of Pak-Austrian Fachhochschule, Haripur. He further apprised the PM on the progress into the establishment of centre of excellence with help of China in mineral resources engineering, railway engineering and agriculture food technologies.

The prime minister on the occasion said, “Building an intellectual capital of the country, industrialization, development of human capital, enhancement of value-added produce along with quality management for optimization of productivity were among the foremost priorities of the government.”

He said that there existed huge potential in the youth of the country to excel and secure Pakistan’s share in medium and hi-technologies.

Sigve Brekke shared with the prime minister Telenor’s “satisfactory” experience of investment in Pakistan. He thanked the government for its continued support for the telecom sector and for encouraging foreign direct investments into the country.

He said that Telenor Group has been operating in Pakistan since 2005 and has made a significant impact on the socio-economic upliftment of the country. “The group has invested over $3.5 billion and created over 5,000 direct jobs, in addition to hundreds of thousands of indirect jobs,” he added.

Sigve Brekke informed the prime minister that future plans of Telenor include scaling up of financial services, connecting farmers to the digital world and extending its services in the healthcare and digital entrepreneurship.

The prime minister appreciated Telenor’s contribution in the telecom sector and said that the government aims to develop a knowledge-based economy in Pakistan. He said he values Telenor as an important partner in developing an ecosystem that supports the government’s development agenda.

The prime minister reiterated that the government is committed to facilitating the investors by enabling them to take full advantage of the huge potential existing in the growing economy of the country.

Prime Minister Imran Khan appreciated Facebook’ existing global outreach and efforts aimed at building online communities to promote social connectivity among people and communities across the world. He also acknowledged the role of Facebook and social media towards raising awareness among the public on critical issues.

The PM observed that there existed a huge potential for the organisation to develop online communities within Pakistan in the field of social services, especially for the promotion of community health services, besides raising health awareness campaigns in remote areas of the country.

Simon Milner briefed the prime minister about various initiatives being taken by Facebook to create online communities, reaching out to remote communities, facilitating access to health services, garnering community responses towards disaster management and checking the misuse of social media.