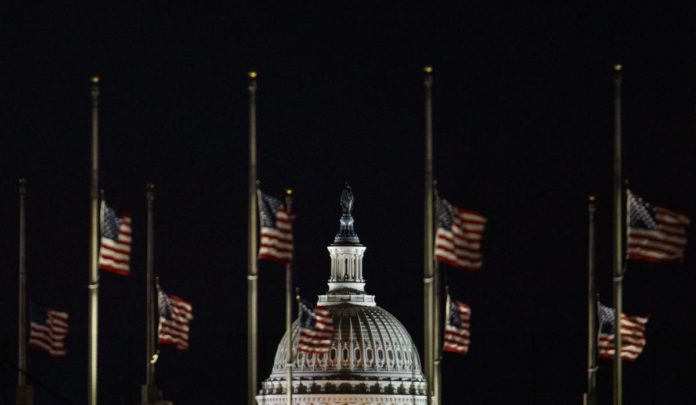 WASHINGTON: Now in its 10th year, America’s economic expansion still looks sturdy. Yet the partial shutdown of the government that began Saturday has added another threat to a growing list of risks.

The stock market’s persistent fall, growing chaos in the Trump administration, higher interest rates, a US-China trade war and a global slowdown have combined to elevate the perils for the economy.

Gregory Daco, chief US economist at Oxford Economics, said he thinks the underlying fundamentals for growth remain strong and that the expansion will continue. But he cautioned that the falling stock market reflects multiple hazards that can feed on themselves.

“What really matters is how people perceive these headwinds — and right now markets and investors perceive them as leading us into a recessionary environment,” Daco said.

Many economic barometers still look encouraging. Unemployment is near a half-century low. Inflation is tame. Pay growth has picked up. Consumers boosted their spending this holiday season. Indeed, the latest figures indicate that the economy has been fundamentally healthy during the final month of 2018.

Still, financial markets were rattled Thursday by President Donald Trump’s threat to shut down the government unless his border wall is funded as part of a measure to finance the government — a threat that became reality on Saturday. As tensions with the incoming Democratic House majority have reached a fever pitch, Trump warned Friday that he foresees a “very long” shutdown.

The expanding picture of a dysfunctional Trump administration grew further with the surprise resignation of Defense Secretary James Mattis in protest of Trump’s abrupt decision to pull US troops out of Syria — a move that drew expressions of alarm from many Republicans as well as Democrats.

How markets and government officials respond to such risks could determine whether the second-longest US expansion on record remains on course or succumbs eventually to a recession.

It has been a tumultuous few days even for a White House that has been defined by the president’s daily dramas.

Trump faces an investigation into Russian interference in the 2016 elections that has led to indictments and criminal convictions of some of his closest confidants. He is coping with a wave of top staff defections, having lost both his chief of staff and defense secretary. He is in the process of installing a new attorney general.

Then there is the partial government shutdown that Trump himself has pushed.

The shutdown is unlikely to hurt economic growth very much, even if it last awhile, because 75 percent of the government is still being funded. S&P Global Ratings estimates that each week of the shutdown would shave a relative minuscule $1.2 billion off the nation’s gross domestic product.

Still, the problem is that the Trump administration appears disinclined to cooperate with the incoming House Democratic majority. So, the federal support through deficit spending that boosted the economy this year will likely wane, Lewis Alexander, US chief economist at Nomura, said in his 2019 outlook.

That, in part, is why the economy is widely expected to weaken from its roughly 3 percent growth this year, which would be the strongest performance since 2005.

Stock investors have been trampled since October, with the Dow Jones Industrial Average sinking nearly 15 per cent. The plunge followed a propulsive winning streak for the stock market that began in 2009. But investors are internalizing all the latest risks, including Trump’s trade war with China and higher borrowing rates, and how much they might depress corporate profits and the economy.

Markets can often fall persistently without sending the economy into a tailspin. But O’Sullivan warned of a possible feedback loop in which tumbling stock prices would erode consumer and business confidence, which, in turn, could send stocks sinking further. At that point, the economy would likely worsen, the job market would weaken and many ordinary households would suffer.

For economists, this may pose the gravest threat to the economy. Trump has imposed tariffs against a huge swath of goods from China, which has retaliated with its own tariffs on US products. These import taxes tend to dampen economic activity and diminish growth.

“The trade war with China is now the biggest impediment to US economic growth,” Ian Shepherdson, chief economist at Pantheon Macroeconomics, said in his forecast for the first half of 2019.

In part because of the taxes Trump imposed on Chinese imports, manufacturing growth appears to be slowing, with factory owners facing higher costs for raw materials. The president has held off on further escalating tariffs to see if an agreement — or at least a lasting truce — can be reached with China by March.

Any damage from trade wars tends to worsen the longer the disputes continue. So even a tentative resolution in the first three months of 2019 could remove one threat to economic growth.