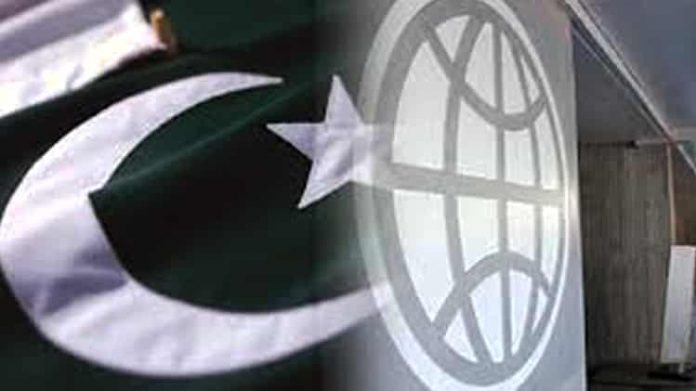 LAHORE: World Bank in a semi-annual report released on Tuesday projected Pakistan’s economic growth will decelerate to 3.7% in the current financial year 2018-19 with financial conditions tightening to help counter rising inflation and external vulnerabilities from a thirteen-year high of 5.8% in FY17-18.

The Washington-based lender stated macroeconomic imbalance are weighing on Pakistan’s growth outlook and it is expected to face financing needs due to large twin deficits (current account and trade deficit) combined with low international reserves.

And activity is projected to rebound and average 4.6 percent over the medium term with support from stabilizing macroeconomic conditions, said the report.

During FY17-18, the World Bank estimated that Pakistan’s economy grew at 5.8% with solid contributions from consumption and investment.

Moreover, activity was backed by the strengthening in the agricultural, industrial sectors and sustained acceleration in services.

The report named “Global Economic Prospects Darkening Skies” stated growth in South Asia is expected to accelerate to 7.1% in 2019 on the back of strengthening consumption and robust consumption.

It noted price pressures, widening fiscal and current account deficits and in some cases, currency and financial market turmoil caused a move to less accommodative monetary policy in countries including Pakistan, Romania, India, Mexico and the Philippines.

Citing the example of Pakistan, the Philippines and Romania, the report stated these markets were experiencing financial market stress or continue to face widening fiscal and current account deficits alongside a slowdown in economic activity.

“There were some signs of rising inflation pressure across the region, and both India and Pakistan raised rates in 2018 to counter the effects of currency depreciation, rising energy prices, and domestic capacity constraints,” the report highlighted.

In Pakistan, the informal sector provides two-thirds of total employment but produces only about one-third of GDP, said World Bank.

“The informal sector accounts for about 70 percent of employment and 30 percent of GDP in emerging market and developing economies.

Since it is associated with lower productivity and tax revenues and greater poverty and inequality, this is symptomatic of opportunities lost.

Notably, World Bank forecast a moderation in activity for Pakistan and Bangladesh and over the medium-term growth is expected to remain at 7.1% in the region supported by robust domestic demand.

“External vulnerabilities are rising, reflected in mounting external debt, widening current account deficits, and eroding foreign reserves. Risks to the outlook are to the downside,” said the report.

The global economic economy is expected to slow to 2.9 percent this year, and 2.8 percent in 2020, slightly below the previous forecast, said World Bank.

Additionally, estimates for nearly all regions and countries were downgraded and it warned the seething trade wars could constrain the global economy.