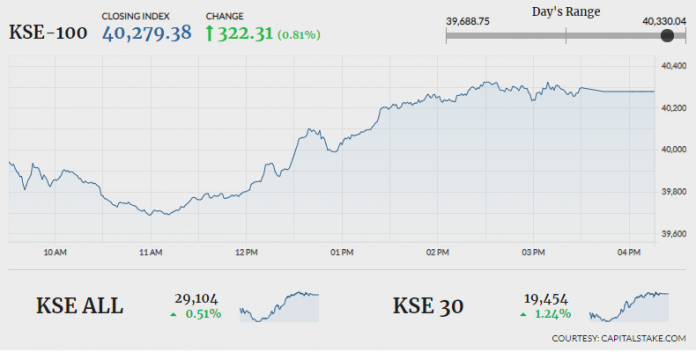 KARACHI: The Pakistan Stock Exchange (PSX) ended its three-day losing streak on Wednesday, as indices that traded in the red zone in the morning session moved in the opposite direction by midday.

Volumes improved significantly from the preceding session. Foreign investors ended as net-buyers on Tuesday with a net inflow of $1.70 million.

The market volumes improved by 40pc as compared to the previous session and were recorded at 132.09 million. Pakistan International Bulk Terminal Limited (PIBTL -6.40pc) led the volume chart with 17.82 million shares exchanging hands following the announcement of its results for the second quarter of financial year 2018-19 (FY19). Sales improved significantly by 290pc YoY, while earnings per share declined from Rs-0.75 in the same period last year to Rs-0.79 in the current period.

The Bank of Punjab (BOP +2.10pc) was next in line on volume chart with 7.56 million shares, followed by K-Electric Limited (KEL -0.94pc) with 7.02 million shares swapping hands.

Habib Bank Limited (HBL +1.36pc) released its financial performance for the year ending 31st December 2018. The company declared a final cash dividend of Rs1.25 in addition to an interim cash dividend of Rs3 already paid. Revenue improved by 10pc YoY, while earnings per share appreciated from Rs5.27 in the previous year to Rs8.04 in the current year.

United Bank Limited (UBL +4.88pc) and MCB Bank Limited (MCB +0.44pc) also announced financial results for the year ending 31st December 2018. A final cash dividend of Rs3 and Rs4 was declared by the companies respectively. MCB’s earning per share decreased from Rs19.56 in the preceding year to Rs18.02 in the current year, whereas UBL’s earnings declined from Rs20.57 in the previous year to Rs12.44.

Mari Petroleum Company Limited (MARI +2.16pc) declared its financial performance for FY18. A final cash dividend of Rs4 was announced by the company. Sales appreciated by 69pc YoY, while earnings per share increased from Rs56.20 in the same period last year to Rs91.18 in the current year.