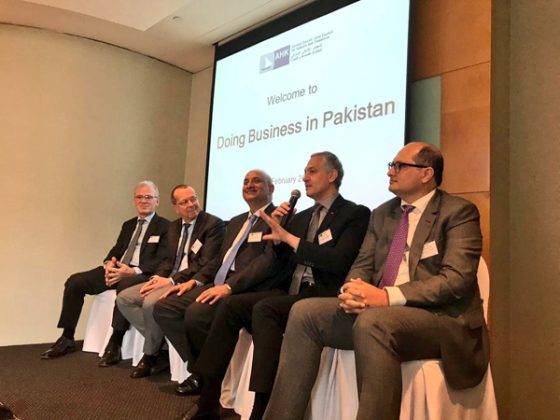 ISLAMABAD: Ambassador of Germany to Pakistan Martin Kobler has proposed that a Pak-German Joint Chamber of Commerce and Investment should be created for the further promotion of bilateral trade and investment.

Addressing a workshop titled ‘Doing Business in Pakistan’, organised by German-Emirati Joint Council for Industry and Commerce (AHK) in Dubai, the envoy said Germany was Pakistan’s biggest trading partner in European Union with trade balance in the favour of Pakistan.

He appreciated the steps taken by the new government for restoring the business confidence in Pakistan and the improved law and order situation in the country.

Earlier, AHK Chief Executive Officer Felix Neugart gave a brief insight into the recent developments in Pakistan, with a special reference to Pakistan being the 6th largest country in the world, having more than 50pc youth bulge, abundantly blessed natural resources, sound manufacturing base and well-developed agriculture and services sector.

Board of Investment Chairman Haroon Sharif on the occasion appreciated the efforts of AHK and German businessmen for the promotion of business and investment in Pakistan. He updated the participants about various initiatives taken by the incumbent government to improve the business environment in Pakistan.

He informed that massive changes have been introduced in the visa regime while the government is also planning to launch an e-visa facility for a limited number of countries in the coming month.

“Besides, the government is striving hard to improve taxation system, cut down bureaucratic hurdles in setting up businesses, evolve a mechanism for early resolution of commercial and investment disputes, and to formulate a country-specific one window operation for investors,” he added.

He quoted the prime minister’s resolve to make Pakistan an investor-friendly destination where people can make money.

This was followed by a panel discussion where most of the queries raised by the German businessmen were related to repatriation of profits, travel advisory and investor facilitation etc.

Ambassador Kobler informed the participants that the law and order situation has considerably improved and international tourists, as well as businessmen, have started coming to Pakistan.

The BOI chairman vowed to further streamline the profit repatriation process so as to facilitate foreign businesses.

On the sidelines of the conference, the BOI chairman also met with DP World CEO Sultan Ahmed bin Sulayem to discuss investment opportunities in Pakistan. The DP World CEO showed a keen interest to invest in the development of ports and free zones in Pakistan.