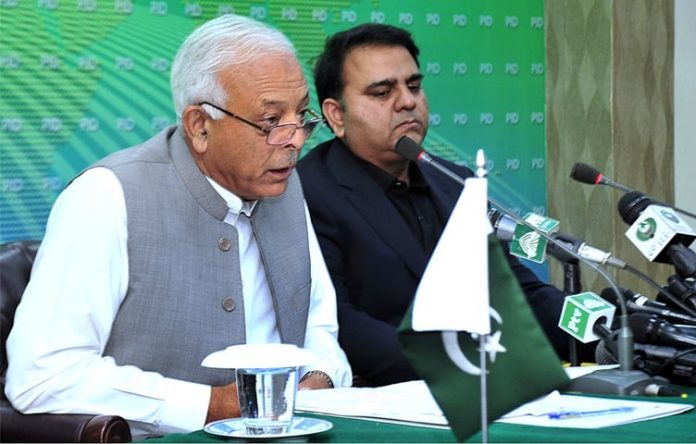 ISLAMABAD: Petroleum Minister Ghulam Sarwar Khan told the Senate on Friday that there was no gas load-shedding in the domestic and commercial sectors, however, demand and supply gap was being observed at peak hours during the winter season in areas that fell at the tail end of the distribution network.

Speaking at the floor of the upper house, he admitted that there were constraints in the system owing to which the commodity could not reach certain areas.

He also highlighted the losses incurred by the sector, saying that incidents of theft and leakage of gas were regularly reported in Khyber Pakhtunkhwa and Balochistan.

“Keeping in view that the people in Balochistan are scattered, new projects are being undertaken to ensure the provision of gas to the entire population. Steps are also being taken to upgrade the pipelines so as to rectify issues pertaining to gas leakages and low pressure,” he said.

The minister lamented that the past governments failed to discover new reservoirs while the present gas reserves were depleting thick and fast. “Owing to the efforts of the incumbent regime, 10 new blocks would be explored while a world-renowned company, Exxon Mobil, is drilling offshore,” he added.

Ghulam Sarwar Khan said the provision of gas to industries was among the top priorities of the government, as it could help enhance the country’s production capacity and consequently its exports.

The house was told that despite an increase in demand of gas during winters, the Sui Southern Gas Company (SSGC) has reported that no gas load-shedding was being carried out by the company in its franchise areas at present, while uninterrupted gas supply was ensured to the domestic as well as commercial customers.

The company further reported that due to an increase in the demand of customers and depletion of gas reservoirs of different fields, there was a shortfall of around 300 Million Cubic Feet per day in the system which was met through gas load management in different sectors as per the sectoral priority order approved by the Economic Coordination Committee.

The Sui Northern Gas Pipelines Limited (SNGPL) reported that uninterrupted gas was being supplied to the highest priority domestic and commercial consumers. Gas consumption by the priority domestic sector has increased manifold during winter on account of room and water heaters, resulting in widening of gap between demand and supply. In certain cases, the consumers at the tail end of the gas network may face low pressure.

The company further reported that recently, supplies to various sectors had to be curtailed due to certain reasons, including outage of Pakistan Gas Port Consortium Limited on account of maintenance from December 28, 2018 to January 1, 2019, rupture of 36 diameter pipeline due to sabotage activity on January 9 and non-berthing of Pakistan State Oil LNG cargo on January 17 and 18. Currently, uninterrupted and continuous RLNG was being supplied to power, fertilizer, industrial, captive power and CNG sector consumers in Punjab.

The minister informed the Senate that the government was striving hard to increase LNG imports, adding that the first flow on RLNG has been injected into SNGPL’s network on March 27, 2015. Presently, 1,100MMCFD RLNG was being injected into the SNGPL system.

Other measures included exploration of indigenous gas sources through allocation of new blocks and promotion of LNG air mix plants in remote and off-grid areas, he added.